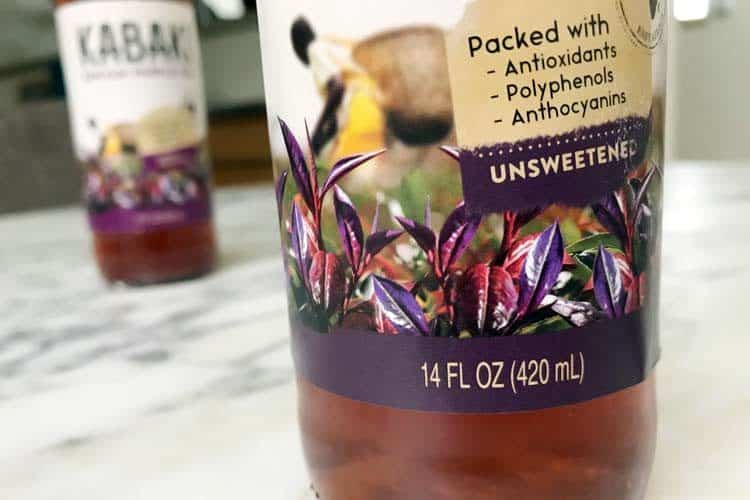 Purple tea comes from the same plant as black, white, and green tea (Camellia sinensis). The difference is that it has a natural genetic mutation which causes it to produce purple-colored leaves. This color is due to anthocyanins.

Purple leaf tea is exposed to extreme growing conditions. It grows on mountains at elevations of 4,500 to 7,000 feet (1,350 to 2,150 meters). The thinner atmosphere up there means less protection from solar rays.

That fact, compounded with most growing ranges being near the equator, means the purple tea plant is exposed to excessive amounts of UV radiation. The anthocyanin pigments help protect them. 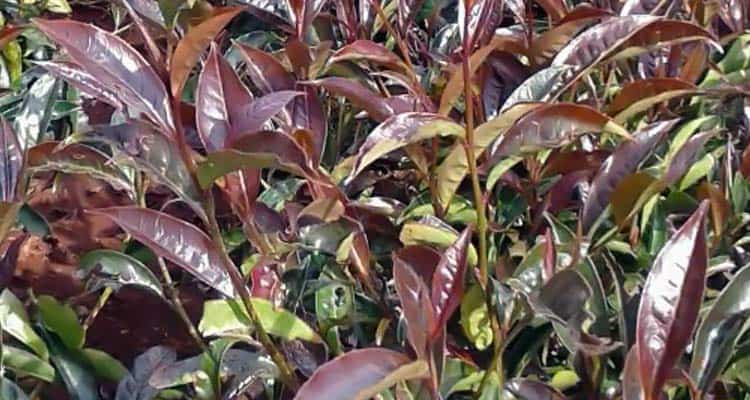 The origin or history of purple leaf tea starts with the first wild mutant plant. It was discovered at the Assam tea gardens of India. It was gifted to the Tea Research Institute, formally known as the Tea Research Foundation of Kenya (TRFK). This was done in hopes that it would be a variety suitable for growing there. The cultivation of it began there in the 1980’s and finally in 2011, the seedlings were made available to small-scale farmers in Kenya.

Officially, the purple tea plant is designated TRFK306 and it’s classified as a green tea, since it’s most often processed in the same manner. The scientific name for the plant species is Camellia sinensis var. assamica. The “assamica” simply means it’s using the Assam cultivar of green tea.

Camellia sinensis var. assamica can have normal green leaves, too. It’s only of the TRFK306 variety of it that produces the purple pigments, at least among those commercially sold.

More recently, the Chinese have cultivated similar clones of this original Indian/Kenyan variety.

In China, Hanlu and Zijuan tea are the names given for their purple. Japan grows it under the name Yabukita.

In total, there are at least 12 version of purple tea being grown throughout the worl today. They are all extremely similar when it comes to their genetic profiles and phytonutrients. (1)

Purple tea tastes and smells like white tea, but with a hint of fruit like raspberry. It’s a completely smooth, mellow, and mild flavor. It doesn’t have the bitterness or astringency one gets with green tea. Nor is there a vegetal or grassy flavor.

It even has less astringency than the finest ceremonial grade matcha, which is made with the youngest green tea leaves and partially grown in shade.

Even to children, the amethyst colored tea is considered palatable without sugar or milk. Not a response you’d be likely to get, if you were to give a young boy or girl unsweetened black/green tea for the first time.

Because there’s lower tannin content, side effects of purple tea are less likely when compared to green and black. Stomach ache, nausea, vomiting, and other common reactions are caused by the tannins in tea.

The Japanese Yabukita and Chinese Zijuan are more bitter than the Kenyan and therefore, are more likely to cause side effects in people sensitive to tannins.

Most likely, throughout the history of the Camellia sinensis plant, there have been plants with this natural anthocyanin-producing mutation that have spontaneously occurred on a one-off basis. However like the white strawberry, a single specimen doesn’t have a great chance at multiplying and becoming commonplace. Unless there’s an act of God, or when humans intervene to cultivate it and ensure it successfully reproduces.

Since humans have only been growing purple tea plants for a couple decades, very little scientific research has been done on them. What follows are only preliminary findings and there’s not enough research to prove any medical benefit. It should not be used to diagnose, treat, cure, or prevent any disease.

Other tea leaves average 10% or less polyphenol content, while purple tea has measured at 16.5%. That’s according to reports published by the brand Purpose Tea and Maypro, a nutraceutical ingredients company (we reviewed the reports, which are not online).

When it comes to the anthocyanins, the whole leaves have up to 15x higher content than fresh blueberries; 1.5% versus 0.1% by weight.

That’s based on leaves before brewing. Obviously, the water dilution means the brewed tea itself is not 15x higher.

ORAC values have not been tested but most likely, how much antioxidants there are in purple tea rivals matcha.

There are very few natural foods with caffeine. Aside from cocoa and certain species of holly, like yerba mate and guayusa, coffee and tea are the two main dietary sources.

Purple tea comes from the Camellia sinensis plant, just like green and black tea does. For that reason, it is a natural source of caffeine.

The Hanlu purple tea variety has the most caffeine at 2.42% by weight, while others tested are not far behind at 2.21 to 2.33%. They also contain theobromine, which is a neurostimulant similar to caffeine that has energizing, yet relaxing properties. (2)

This amount of caffeine is slightly less than regular green and white tea, so brew the purple stronger if it’s an energy boost you’re after. (3)

Other teas can cause an upset stomach due to high tannin content. Coffee can too, because it’s acidic. Furthermore, many people have an increased urge to defecate after drinking coffee due to a unique amino acid it contains. When you drink purple tea, you get the advantage of caffeine without these adverse reactions.

Unsweetened purple tea has no calories. Technically it has a few, but due to the labeling laws for nutrition facts, most standard serving sizes round down to 0 calories because there are less than 5.

Here are the nutrition facts for purple tea from Kenya. 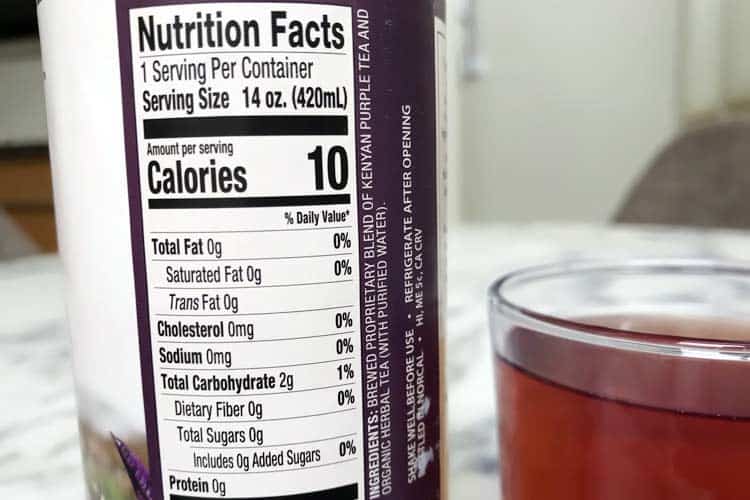 This brand, Kabaki, is sold in a large 14 oz bottle (420 mL) and clocks in at 10 calories. Keep in mind it does contain a proprietary and undisclosed blend of herbal teas, too. Regardless of brand, the unsweetened versions will be sugar free. Vitamin and mineral content is trivial, as is the case with all beverages made from Camellia sinensis.

Being a no calorie beverage isn’t unique for tea. What is unique is that unlike green and black, the taste of purple is enjoyable to most even when unsweetened.

The same can’t be said about most commercial varieties for other types of caffeinated teas.

For 17 days, they were placed on a high-fat diet using olive oil. Some received a purple tea dosage equivalent to 200 mg per kg of body weight. The other group did not. Both were compared against a group of mice on a normal diet. 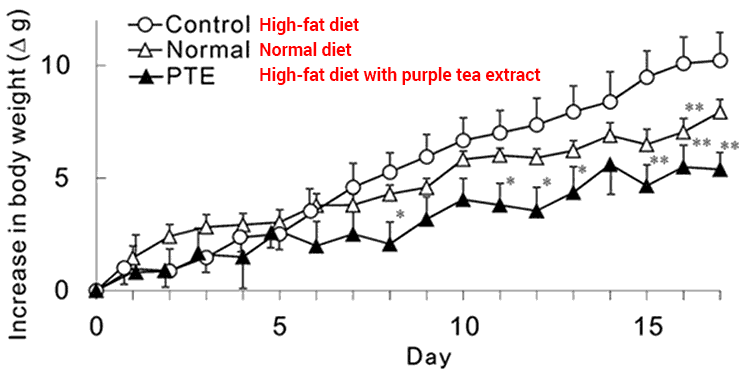 Even though they were consuming the same amount of calories, those getting the PTE had significantly lower body weight than the regular high-fat diet group.

Next, they did a small clinical trial involving “mildly obese” humans. All had a BMI above 24. There were 10 men total and they ranged from 32 to 69 years old (47.1 on average).

While the scientists obviously couldn’t dissect their bodies and livers like they did the mice, the benefits on human weight loss and fat metabolism appeared to be similar.

After 4 weeks of drinking purple tea daily, participants had lower body weight, BMI, body fat mass, abdominal fat, and waist size. Their muscle ratio went up and no side effects were reported.

The caffeine content is believed to be partially responsible for the weight loss benefit. In addition to EGCG and ECG, which are found in green tea and believed to be contributors, the purple leaf contains 6.2 to 8.4% GHG. That’s short for hexahydroxydiphenoyl-ß-D-glucose.

GHG is unique to purple tea and scientists report that it alters the way the liver metabolizes lipds (fats) by enhancing CPT1A gene expression.

This is why purple might be better than green tea for weight loss. (4)

Anthocyanins are not a single compound. They’re a large category of plant pigments which produce most blues and purples, as well as many reds, in the vegetables and fruits you eat.

One type in particular which is getting a lot of buzz are what’s called delphinidin anthocyanins.

While acai is rich in anthocyanins, it has a poor concentration of this type.

What does have a high amount is maqui berry and this tea.

In fact, for the Ziyan tea cultivar out of China, it tests as having 70.76 mg per 100g of dry leaf. This is an extremely high concentration. (5)

There’s not human and animal researched focused on the tea, but research using isolated delphinidin anthocyanins (from other sources) has suggested they may offer relief for dry eyes and help diabetics with blood sugar control. 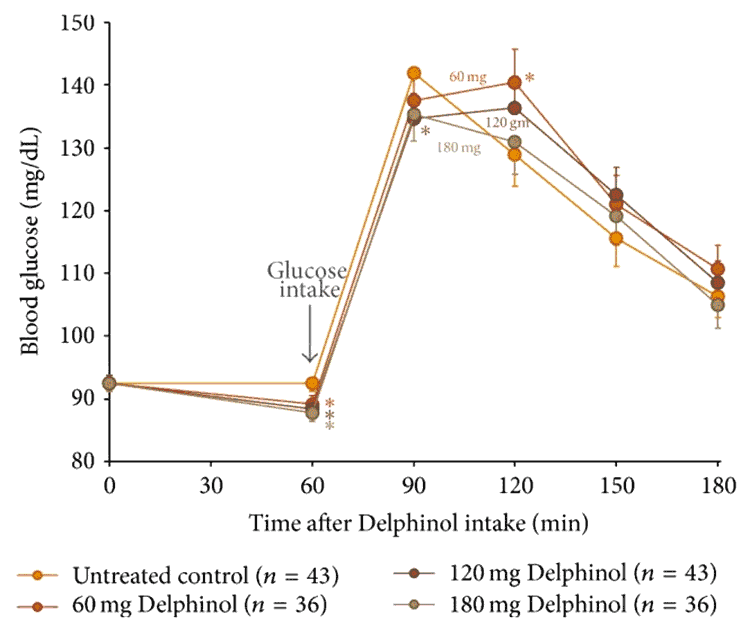 In this chart, you can see how in a dose-dependent manner, intake of Delphinol (a patented extract) correlated with lower blood sugar in a human clinical trial. (6) (7)

Apoptosis is the normal death of cells, a process which cancer is notorious for evading.

Another study from 2017, this one from a Kenyan university, did experiments using metastatic breast cancer model using a mouse cell line. 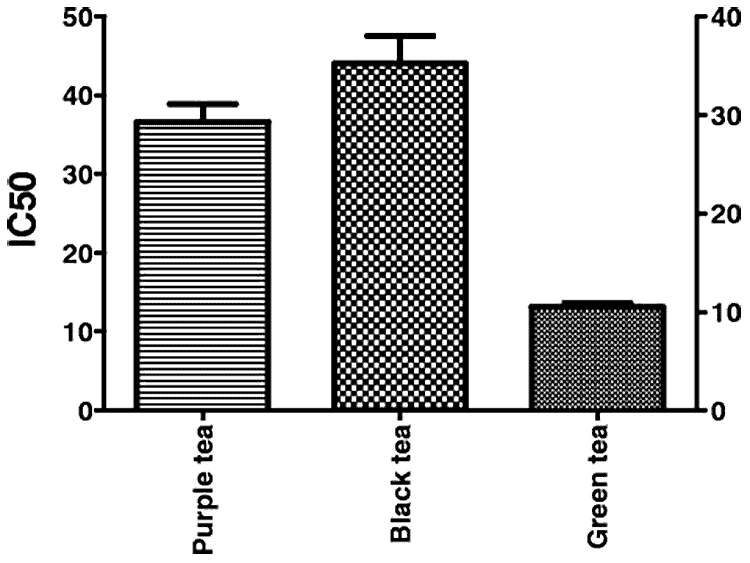 The anti-cancer activity of the purple was over double that of green tea, though surprisingly, it was black which did best in this experiment. (9)

At a university in Taiwan, extracts of purple-shoot tea (what they call it) was tested in the lab against cultured human colon cancer cells in 2014. They said the results showed that it is “a potential novel dietary agent for colorectal cancer chemoprevention” because it inhibited proliferation through multiple pathways. (10)

Mice have a blood-brain barrier (BBB) that is similar to humans. Researchers have confirmed that the anthocyanins in Kenyan purple tea cross this barrier and reinforce antioxidant activity in their brain. This benefit was amplified when CoQ10 was given along with them. The suggested it might offer advantages for neurodegenerative diseases, like Alzheimer’s and dementia.

While not proof for humans, this study does suggest that the tea leaf offers a source of antioxidants that probably can cross into our brain. That’s not something you can say about all dietary antioxidants, because of the blood-brain barrier which filters out many compounds from entering. (11)

If you live in the US, Canada, Germany, United Kingdom, France, or another western country, right now your best bet is to find purple tea for sale online. 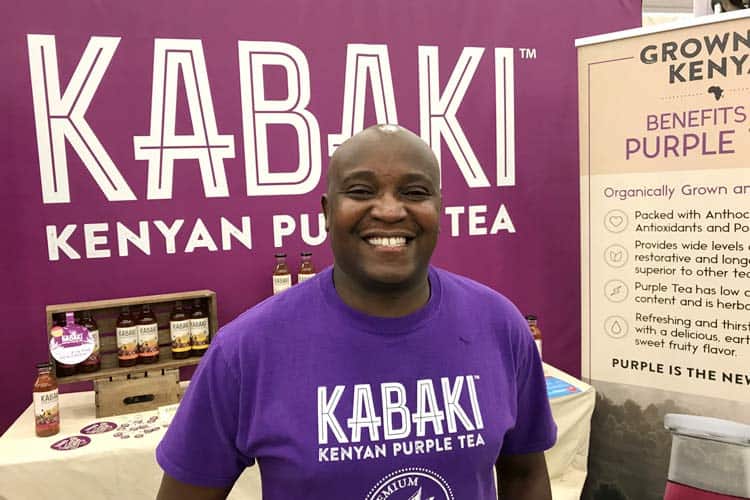 The good news is that there is a brand of ready-to-drink bottled purple Kenyan tea which is making inroads towards national distribution.

Martin Kabaki is the founder and his last name is the brand. We met him at the Natural Products Expo West to hear about his product and story.

Martin came to the US from Kenya, with the dream of starting a business that he can use to help people back home. He sources his tea leaves from financially-challenged and independent farmers high up in the elevations of Mount Kenya. Although not certified organic, the volcanic soils up there are perfect for growing it naturally, far away from sources of pollution.

His company donates 10% of pre-tax profits to Kijiji Medical, which is charitable hospital in Navasha, Kenya. It started out as a small dialysis clinic and today, strives to offer all facets of healthcare to the underserved.

Keep an eye out for Kabaki on a store shelf near you!

Meanwhile, you can buy organic tea bags on Amazon from the brand Babu Organics. Their leaves are hand-picked from a single estate in Kenya.