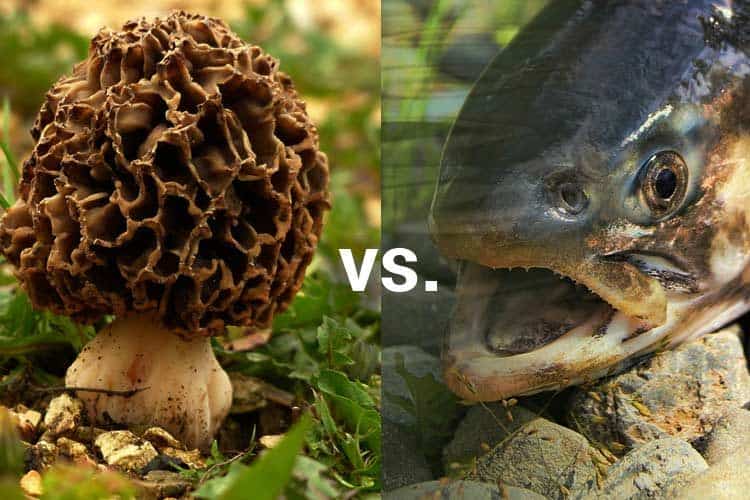 Guess what, it’s your lucky day! We at Superfoodly would like to give you $1,000* for free.

Aren’t you excited? Then you see the fine print…

*in the form of Monopoly money

That’s basically the equivalence of what’s going on with a lot of the marketing for vitamin D in mushrooms and other fortified food sources. But at least we have that fine print disclaimer, they don’t even bother to tell you what you’re getting may not be what you think.

The bioavailability of D3 is a multiple higher than D2. Unfortunately only one plant-based D3 source exists, from lichens, and this is a good supplement which uses it. 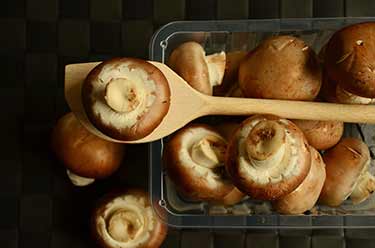 At the supermarket you are being duped when you buy a package of white buttons which exclaim “high in vitamin D” or that it’s a “rich food source” and lists the corresponding amount in IU’s.

We technically can’t blame the food companies for that, because what they’re doing is currently 100% legal based on how this nutrient is measured.

They’re simply labeling it how they are being told to by the government. Why the FDA has not fixed this yet, we have no clue. This scam is the government’s fault.

To a much lesser degree – simply because they’re not very popular – supplement users are buying vitamin D mushroom powder and capsules. They too may not be aware of what they’re really getting.

Like you, we wish we could easily get adequate D from plant based foods.

After all, bathing in the sun for D is advice that’s outdated by decades. Even the American Academy of Dermatology “does not recommend getting vitamin D from sun exposure (natural) or indoor tanning (artificial)” due to the risk of skin cancer and premature aging of the skin (1).

And for many vegans, they don’t want the vitamin D supplements because most are made from lanolin, which comes from the wool of sheep.

Basically, we are all SOOL if we were counting on ‘shrooms and fortified foods for high amounts. Here’s why…

Do mushrooms have vitamin D? Yes, however it’s in the form of D2, not D3. They are not absorbed the same way.

Despite their names, both vitamin D2 (ergocalciferol) and D3 (cholecalciferol) are not the actual form our body uses. Both are considered precursors and have to be converted through metabolic processes before they become usable.

D2 is found in fungus. How much the amount is can vary dramatically depending on type.

The RDA for vitamin D is 600 IU (15 mcg) for adults up to age 70 and for older than that, it bumps up to 800 IU (20 mcg). Most species would only be providing you with a tiny percentage of your daily value. Excluding maitake, which is a major outlier among them.

But how little they contain isn’t even the biggest problem.

Vitamin D3 is the animal-form. The highest sources are fish. For example, 3 ounces of cooked salmon provides 447 IU and swordfish, 566 IU. Meats, eggs, and dairy products contain it but very little in comparison. The yolk of a large egg (where the vitamin D is) clocks in at 41 IU. Fortified milk is 115-124 IU. An ounce of Swiss cheese is just 6 IU (3).

Even though many animal-based foods have low numbers too, their form of vitamin D3 is far better.

Why they were originally counted as equal

Officially, both the D2 and D3 are considered to have equal absorption and convertibility, making their values interchangeable. According to the FDA, 1 IU of mushroom vitamin D is the same as 1 IU coming from fish or dairy.

But guess what? That assumption was originally made 80 years ago based on rickets prevention in babies. That causes softening of the bones in children, often as a result of getting too little vitamin D in their diet. 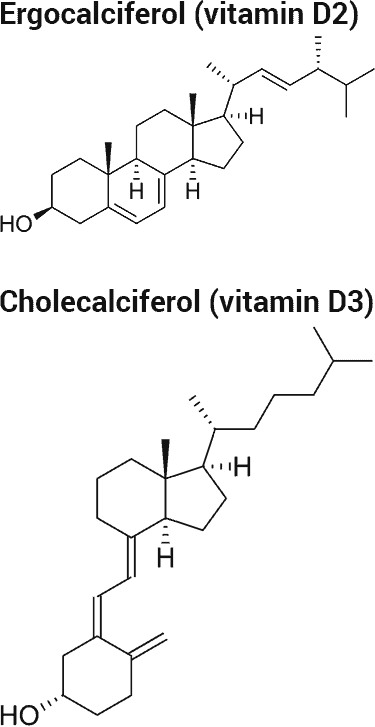 Since then, an overwhelming body of research clearly suggests that the two forms – while both helpful – should not be viewed in equal weight.

This is not news, either. It was questioned from the start.

Take the research titled “The case against ergocalciferol (vitamin D2) as a vitamin supplement,” which was published a decade ago in the most prestigious publication in this field; The American Journal of Clinical Nutrition (4).

In it, they go through the history of the two forms and how even as early as 1930 – shortly after the discovery of D2 – scientists were already saying the two forms may have different biological values.

They said that 1 unit derived from cod liver oil (D3 source) was as effective at preventing rickets as 4 units of Viosterol (synthetic D2).

In the decade that followed, more than 40 studies were done on both and overall they suggested inequality, but because the results were confusing and some studies were sloppy, it was concluded “for practical purposes” to treat the two as being the same.

Nine years later the World Health Organization stuck with that and the rest is history.

Both before and after that, in the 50’s and 60’s, pharmaceutical companies continued to see their D3 formulations as being 4x more effective than their Viosterol.

Today’s synthetic D2 may perform better, but research still suggests the differences are profound, as you will see in a moment.

Everyone seems to be in agreement they are not apples to apples. As said in the concluding thoughts:

“…the public expects to derive the equivalent effect per unit dose of vitamin D, whether it is vitamin D2 or vitamin D3. The scientific community is aware that these molecules are not equivalent. Therefore, vitamin D2 should no longer be regarded as a nutrient appropriate for supplementation or fortification of foods.”

What the current research says

What is the difference between vitamin D2 vs. D3? In 2013, the Journal of Clinical Endocrinology & Metabolism published a randomized, double-blind, placebo-controlled trial which took place over 24 weeks to evaluate how well each is absorbed and used in the human body (5).

The 85 participants who completed the trial each randomly received one of the following:

Since the study began at the end of summer, the participants’ natural vitamin D levels from UV exposure were able to also be factored in (comparing summer vs. winter levels).

The results? At the end of the trial, those receiving D2 supplements had levels in their blood which were significantly lower than the D3 group. This may infer mushrooms are a good source, but not relative to fish.

The people receiving the D3 vitamin supplement were able to maintain around 80 throughout the entire study. Meanwhile those on the D2 declined more and more as time elapsed.

If you run the numbers from the last column, you will find that:

Or look at a total of 50 studies

Still not convinced as to the in vivo availability? In 2011 there was an analysis put out by Cochrane Database which compiled and analyzed the results from a total of 50 different studies, which was a total of 94,148 participants (6). Most of the trials did focus on elderly women (age 70+) which is to be expected, being that seniors are one of the highest at risk for vitamin D deficiency. It’s why the RDA for them is 25% higher.

The conclusion? Vitamin D2 had “no statistically significant effect on mortality” while the D3 “seems to decrease mortality” among the elderly women. Reportedly those on D3 had 6% relative risk reduction while those on D2 had a 2% relative risk increase.

How it affects depression and energy

But the side effects of depression extend far beyond just your mood. You may feel like you have less physical energy in life. Sex drive and libido might also plummet.

A link between low D levels affecting mental health have been well established. How important is it? According to researchers at Loyola University Chicago (7):

“Effective detection and treatment of inadequate vitamin D levels in persons with depression and other mental disorders may be an easy and cost-effective therapy which could improve patients’ long-term health outcomes as well as their quality of life.”

Which should you buy? 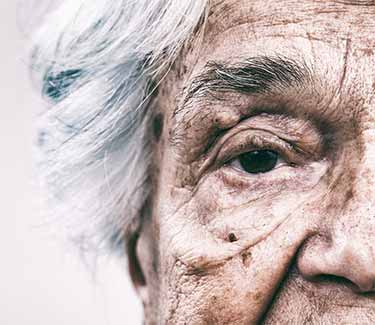 Please don’t rely on the sun for it like this lady did!

In a nutshell, the best form is vitamin D3. This is what the research suggests your body is able to absorb and convert at a higher rate versus D2.

This is important to consider when tallying up what food is rich in vitamin D and how that food will factor into fulfilling your RDA.

How much should you take?

Well the research seems to suggest we should perhaps be counting the animal-derived at face value and the other at a lower, fractional value.

To be clear, this is not to say that vitamin D in mushrooms is bad or not bioavailable. Whether from a fungus or an animal, both are good and can help you reach your required intake.

However consumers might be getting misled when they are told a D2 supplement or food of a given IU value has the same effect in the body as the equivalent IU amount coming from D3.

As far as supplements and powders are concerned, vegans and vegetarians may be even more in need of them since the form they are getting may not convert as well.

Even though it’s “against the rules” so to speak, those of us at Superfoodly who are vegan take the D3 capsules made from lanolin (sheep wool) because the evidence is so overwhelming. But really, they’re a good idea for everyone, especially if you spend a lot of times indoors or at the office during daylight hours.

If you insist on 100% plant-based sources of D3, they’re not as cheap because they’re derived from lichens, which are a rare yet natural fungus-plant hybrid. On Amazon, we like this plant-based D3 from Naturelo. It’s potent (2,500 IU) and fairly priced.

As you saw, for adults under age seventy the RDA is 600 IU and getting that mostly from food is tough, considering that even a serving of fortified milk is only 115-124 IU. Consuming fish everyday isn’t the solution either, given the mercury and heavy metal hazards.