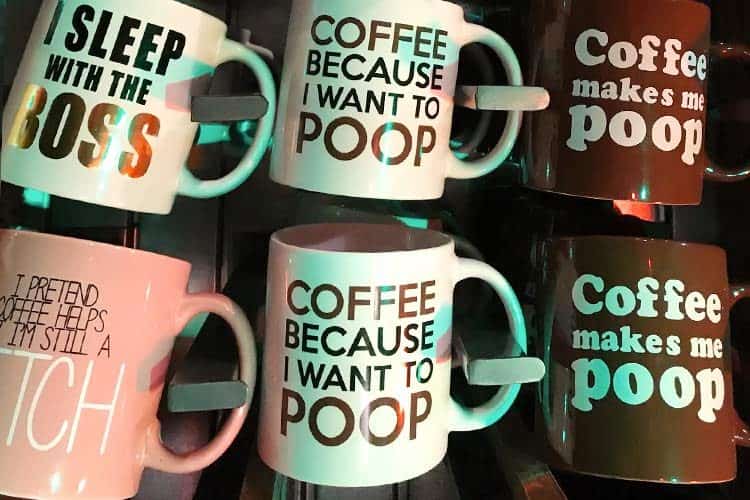 Why Does Coffee Make Me Poop?

Recently there has been uproar in the news that coffee causes cancer, legally speaking. Due to the acrylamide, which is created during roasting, places like Starbucks, 7-Eleven and even independent ma-and-pa restaurants have to warn their customers, in California at least.

Why don’t they have to post warning about the other big health risk?

As in, the big dump you may have to take right after downing a cup of black.

Unlike the very negligible and remote cancer risk, needing to poop after coffee is very common.

For some it’s an undesirable side effect, which can even cause diarrhea in extreme cases.

For others, it’s an addictive benefit. “I need coffee to poop” is the motto of many. They get accustomed to needing the toilet after their morning cup of Joe. If that routine is disrupted, they can’t go later in the day.

While no one talks about this effect – especially not Starbucks – just look at the above photo. We spotted those novelty coffee cups for sale at a Spencer’s Gifts in Redondo Beach. It’s obvious this side effect/benefit is on the minds of many!

Is it the caffeine in coffee that makes you poop? 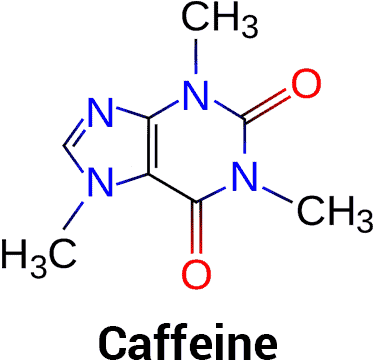 Many people, even some in the media, report that caffeine is the reason. That’s a myth. Even decaf coffee will make you poop, because it’s not the caffeine content which causes this effect.

Caffeine does cause an urge to go to the bathroom; for urination, not defecation. There is no scientific evidence to suggest it stimulates the bowels.

If it did, soda and tea would be causing the same effect as coffee, yet no one complains about those beverages relegating them to the restroom.

Per the USDA, a one cup standard serving of coffee contains 95 mg of caffeine. This is higher than Red Bull at 80 mg and Coca Cola at 32 mg per can. Yet, even if you take caffeine pills which are 200 mg each, you still won’t experience the need to go number two, or have loose stools/diarrhea. (1) (2)

What really causes it

The main reason why coffee makes you have to poop is not caffeine, but rather because it has been proven to boost levels of two digestive hormones; gastrin and cholecystokinin. The coffee’s chlorogenic acid may also be a contributing factor. Gastrin is secreted into the bloodstream by the stomach wall. In addition to stimulating the release of gastric juices, it activates a process called peristalsis; the relaxation and contraction of muscles in the colon. This helps move feces down to their exit.

Cholecystokinin is secreted by the duodenum, which is the top of the small intestine. This hormone boosts the release of bile into the intestine and the release of digestive enzymes by the pancreas. In addition, cholecystokinin has been proven to increase colonic motility, meaning it increases the movement of fecal matter.

The acidic nature of coffee helps you poop, too.

Chlorogenic acid is the main antioxidant in coffee, so it potentially offers a number of health benefits. One of the drawbacks is that its acidic nature spurs the stomach to actually produce more stomach acid (HCl, KCl, & NaCl). Those do help break down protein, though too much can cause heartburn and stomach ache.

This boost in acidity, spurred by the chlorogenic acid, can cause the stomach to dump its content prematurely into the small intestine.

Believe it or not, it actually takes an average of 33 hours for men and 47 hours for women for food to move through the entire digestive tract. So when the stomach dumps its content into to the small intestine, there are still many hours left before it exits your body. But like a row of dominoes, that movement near the top of the digestive tract can still promote movement lower down. (3) (4) (5) (6) (7)

What kind of coffee makes you poop?

Both Arabica coffee (from the Coffea arabica plant) and Robusta (from Coffea canephora) will cause you to poop, if you are among the 30-60% of the population who experiences this side effect.

There are over 1,000 different chemical compounds which naturally occur in coffee, according to Coffee: Volume 1: Chemistry. Scientists don’t yet know which one(s) are specifically responsible.

Caffeine is not the cause, as it’s confirmed that decaf coffee makes you poop. This is further evidenced by the fact that other highly caffeinated drinks, like black tea and matcha, don’t have the same effect even when strongly brewed. Caffeine pills don’t do it either.

If made with real coffee beans, all brands and types may make you poop and for those most sensitive, cause diarrhea. A cup of hot black, iced coffee, decaffeinated, Starbucks, Bulletproof coffee, it doesn’t matter which you drink, as they all contain the same compounds of the plant.

How many people are affected?

It’s commonly claimed by various media outlets that 30-40% of the population experience the need to defecate after downing this beverage. What they forget to mention is that’s the average for both genders counted together. A deeper dive into the data suggests that women may be twice as likely to experience this.

In 1990, a study was published in the scientific journal bluntly titled Gut. It’s a well-respected publication and an official journal of the British Society of Gastroenterology.

The study reported that 29% of men reported “a desire to defecate” within 20 minutes after drinking coffee. For women, the rate was twice as high at 63%.

The different reactions in women vs. men is not surprising, given that the female rectum has been found to be more sensitive to distension. Unfortunately, women are also more prone to having constipation and irritable bowel syndrome (IBS). So it makes sense why the laxative effect of coffee is stronger in women.

Now this study did use a small sample size of only 99 people. What makes it noteworthy is that 14 of them were chosen to undergo a multiport manometry. That’s an unpleasant series of tests which involves rectal balloons and probes, to directly measure what happened before and after drinking coffee.

For 6 of those 14 participants, they had claimed that coffee doesn’t make them poop. Their test results validated that; there was no increase in rectosigmoid activity after drinking regular coffee, decaf coffee, or plain hot water.

For 8 of the 14 participants that reported coffee causes them to poop, their test results confirmed that… 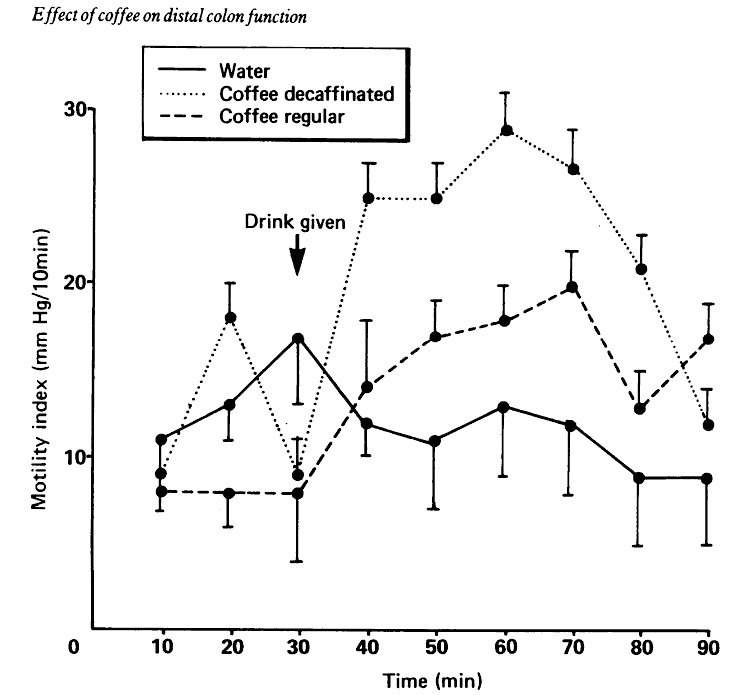 Surprisingly, when decaf was drank, the stimulation of the colon was even greater than with regular coffee.

The motility index of the distal colon hovers around 8 to 9 before drinking coffee. Afterward, it shoots up as high as 20 with regular coffee and nearly 30 with decaf. Drinking the same amount of hot water doesn’t cause this, as the motility index actually decreases with it.

Decaf coffee can make you poop right away, just like regular, but it’s premature to say it’s more stimulating. The small study size or variations in samples may be the simple reason as to why coffee without caffeine is a more potent laxative. (8) (9) (10) (11)

How to stop coffee from making you poop

The laxative effect of coffee may be lessened with the following techniques:

1. Drink cold or warm instead of hot

Reviews on Reddit and elsewhere report that lukewarm seems to have a milder effect in some people.

At least according to one mechanism of action, that theoretically makes sense. A piping hot beverage may stimulate the stomach more, which in turn, may lead to increased production of gastric juices.

However, research done by the Veterans Administration Hospital in Dallas confirms that hot, warm, and cold coffee all have an equal effect on secretion of the gastrin hormone and the emptying rate of the stomach. The belief that iced or cold coffee is less likely to cause it may just be a myth, but it’s worth a try. (12)

Assuming they’re brewed with equal amounts of coffee grind, a serving of black will contain the same amount of active ingredients as a serving you add milk to. The difference is that the milk dilutes the concentration, and hence, can slow down how quickly it gets absorbed.

Since the potency is less, dilution with milk or creamer may reduce the laxative reaction from coffee. Adding cow milk or a vegan alternative, like almond milk, should be equally effective.

The bad news is that adding milk reduces availability of the antioxidants. This is according to research out of a Croatian university which tested antioxidant activity using plain coffee, macchiato, latte, and other brewing methods. (13)

Food can help for the same reason that milk can; dilution of the bioactive compounds.

If your morning ritual is coffee, followed by breakfast, try doing both at the same time. It might help stop the urge to poop.

4. Use dark vs. light roast

Many people have the impression that dark roast is stronger than light. That’s a fallacy.

Starbucks Blonde Roast actually has more caffeine; 360 mg in the Grande vs. 310 mg for the same size of Pike Place. That’s according to the their own nutrition facts.

Research out of Germany and the University of Wisconsin reports that dark roasts are “less effective at stimulating gastric acid secretion in healthy volunteers.”

The boost in stomach acid caused by coffee is only a contributing factor. Less may help. (14)

Another good reason to use it is that acrylamide in coffee is lower in dark vs. light.

Watering down and using additives (milk or a meal) may be how to stop pooping after drinking coffee. This solution may result in higher daily calorie consumption, unfortunately. That’s bad for your weight loss goals. Also, your caffeine buzz may be more subtle. That’s not what you want on a Monday morning.

“I drank coffee and now I can’t stop pooping!” is what some people say regardless of whether it’s watered down or not.

In both scenarios, caffeine supplements are a great alternative. Not only do they save you from this side effect, but they may also save you some big money (and time) versus standing in line at Starbucks everyday.

Our favorite are these caffeine + L-theanine supplements on Amazon. The added theanine, which is found in green tea, reduces jitters and boosts your focus.

It either affects you or it doesn’t.

For those affected, it can be a curse or benefit, depending on your lifestyle and schedule. Consider yourself lucky, as not everyone has the ability to schedule their number two time, thanks to coffee. Emptying out before going to work, or getting on an airplane, can be a big relief in more ways than one!

You might as well make light of this weird phenomenon. Those novelty mugs we saw at Spencer’s? We found an even better one on Amazon.