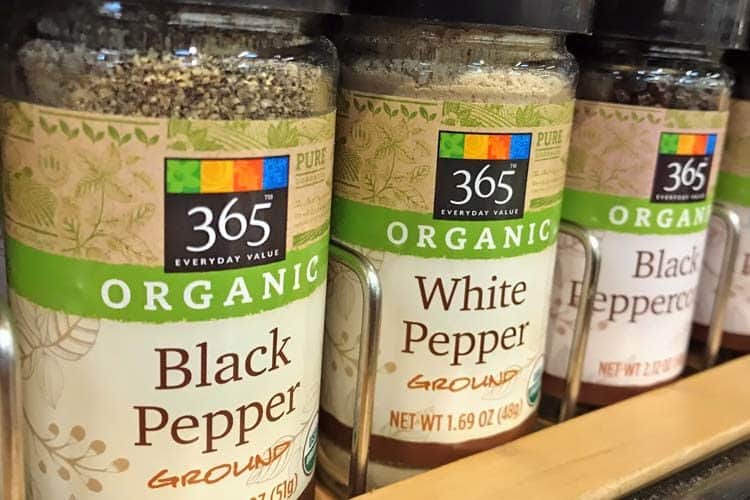 White Pepper vs Black Pepper: Difference & Which Is Healthiest

Salt is a mineral, not a spice.

Setting aside that flavoring agent, the tiny fruits of the Piper nigrum plant are the most well known.

They were a luxury throughout much of history. If you were alive 500 years ago, you would have to be rich to afford them.

Today, pepper is the most popular spice in the world. Depending on where you live, it may also be the cheapest.

What is the difference between white pepper and black pepper?

Both are dried fruits (peppercorns) which come from the same plant, Piper nigrum, which is native to south India. The difference is that black pepper has the fruit skin intact, while white pepper has the skin removed.

How white pepper is made involves soaking the ripe fruits for 7-10 days, so their outer skin can be easily removed. Afterward, they are dried and either sold as ground white pepper or whole peppercorn. 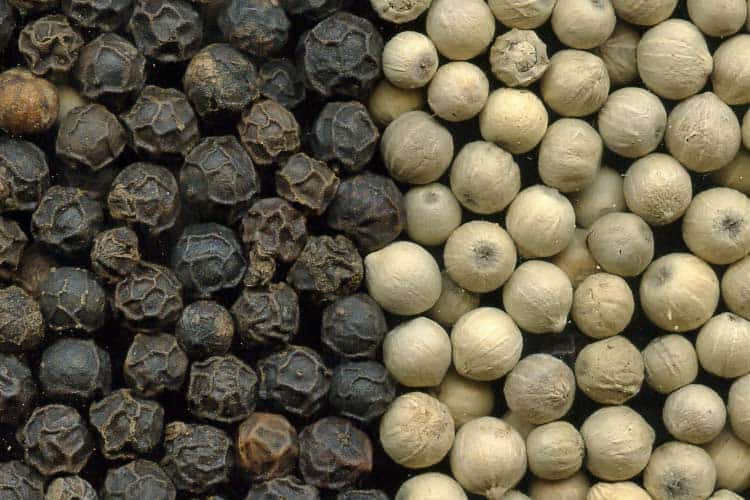 Unlike white that’s made from the fully ripe fruits, black pepper is made from those which are not ripe. Black pepper is not always raw. Sometimes the peppercorns are cooked/baked prior to grinding into powder or being sold whole. However, the dark color comes from the maturing and oxidation of the berries as they dry. It’s not from the heat of cooking.

There’s also green pepper. They are harvested premature and undergo freeze-drying or brining to stop the ripening process.

All colors of this spice get their flavor from the volatile (essential) oils and pungent compounds.

Among them, what’s most noteworthy to human taste buds is the alkaloid known as piperine.

White pepper does not taste the same as black pepper because its skin has been removed. Even though it contains comparable amounts of piperine, many terpenes are lacking in the white. This leads to a milder, less complex taste.

The skin contains these aroma-contributing terpenes:

The pulp or flesh of the fruit contains very little of the terpenes. That said, the white can develop different and unique notes to its flavor, thanks to the fermentation process that’s part of removing the skin. (3) 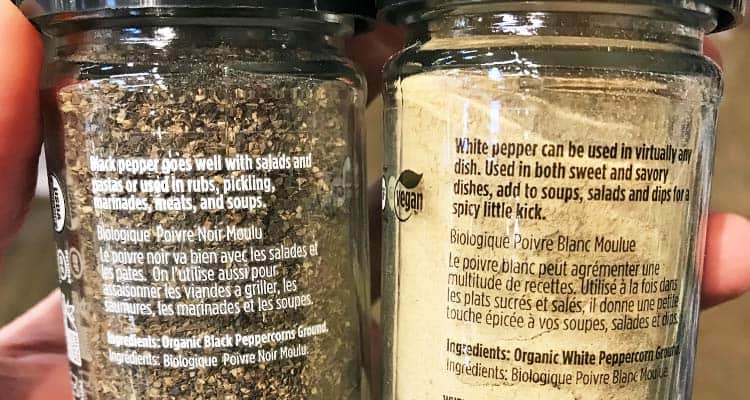 In short, white pepper tastes as hot and sometimes even hotter than black, due to its piperine content. However, its flavor profile is less complex than black pepper, due to the missing terpenes which are mostly found in the missing skin.

Which is healthier for you?

In terms of antioxidants, white pepper demonstrates about 20% higher activity. Its ORAC value is 40,700 versus 34,000 for black pepper.

While you can be allergic to white pepper, since it comes from the exact same plant as black, you can’t be allergic to one and not the other. While not a bona fide food allergy, some people do prefer the snow colored variety because their sinuses are less sensitive to it.

Regardless of color, the biggest health benefit of this spice is its ability to boost the bioavailability of other nutrients. 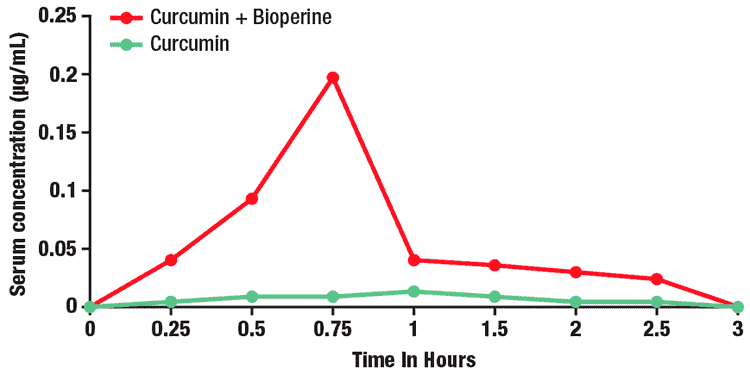 This is why curcumin, which is the bioactive compound in turmeric, is often supplemented with black pepper and/or isolated piperine to enhance absorption.

It is the piperine which has been proven to enhance the bioavailability of various supplements and medicines by 30-200% and sometimes higher. (4)

Since pepper white in color contains as much piperine as black, and sometimes even more, one could argue that it’s the healthiest choice.

That said, the vast majority of research over the past three decades on this topic involves the regular black spice and derivatives from it, like BioPerine.

Furthermore, there may be other unknown health benefits coming from the alkaloids which are only found in the skin.

In conclusion, both white and black are healthy for you. They both provide a high amount of antioxidants and piperine for boosting phytonutrient absorption. You should eat whichever one you enjoy most. Because if the milder flavor of white means you will use it more often, then that factor alone makes it ideal.

Why is white pepper so expensive? As with most things, it has to do with supply and demand. Even though it comes from the same peppercorns as black, much less of the white is made. Hence, it’s a specialty spice that often correlates with a higher cost.

There really isn’t a substitute for white pepper. You could simply use less of the black, in an effort to mimic the milder and less complex taste, though it won’t be identical. Chili flakes and cayenne certainly would not be a good substitute.

The culinary advantage that white offers is that you can hide it in food, without dark specks being visible. The fact that it doesn’t overpower the other flavors in recipes as much is a major advantage for more delicate dishes.

You should be able to find it for sale in ground form at any grocery store that has a half-way decent spice and seasoning aisle.

If you want an excellent ground version, we like this one on Amazon by Simply Organic.