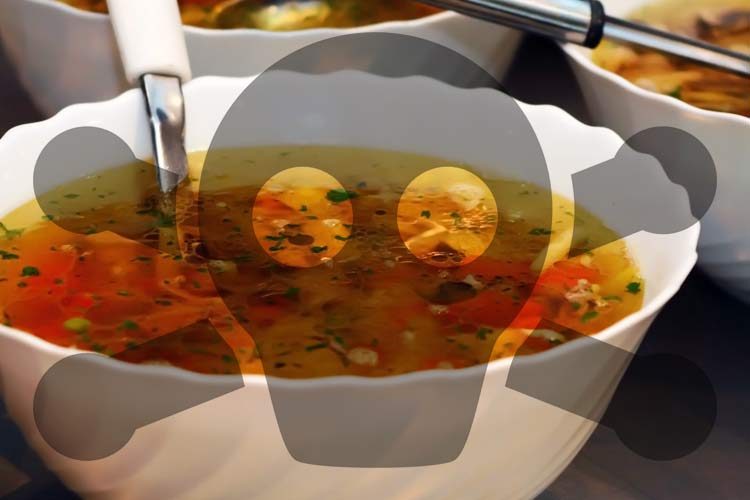 What is Melamine? The Safety of Your Plates Examined

The funny part about modern society is that we focus so much on what’s in our food, while largely ignoring what it’s on.

We’re talking about what dishes and storage containers your food and drinks come in contact with.

Did you ever stop to think that your USDA certified organic microwavable meal is being cooked in plastic – that when heated – might be leaking chemicals into your food?

BPA is not even much of an issue these days, since most manufacturers have stopped using it. But if you think BPA-free means safe, think again.

BPA is only one of many endocrine disruptors. Other compounds in plastics can affect your hormones.

Despite that fact, it’s peculiar that we have no problem paying up for an overpriced organic meal, yet we scoff at the idea of insisting glass vs. plastic dishes. 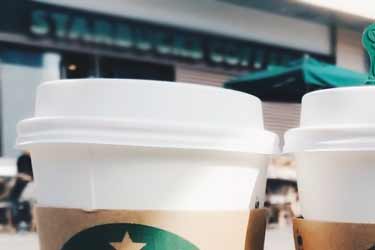 Even if you don’t cook using those containers or use plastic wrap, consider your hot carryout meals in the clamshells. Or that paper coffee cup with the lining inside.

Even when it’s not hot food, consider the acidity of vinegars and tomato products. The latter of which is why BPA has been (and still is to a lesser degree) used in canned foods… the tomatoes dissolve aluminum! What do you think they’re doing to those plastic deli containers as they sit in your fridge for days?

While on the go, you can’t avoid these disposables altogether, but at home you have control over what you eat your food on. 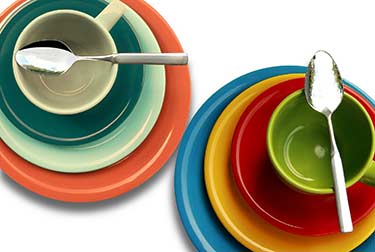 Technically, melamine is a white crystalline chemical which is not the same thing as plastic. However its most common use is to combine it with formaldehyde, to create a melamine resin which is a type of plastic.

Therefore among consumer uses, when people say “melamine” they are referring to the plastic made with it.

What are melamine plates?

You will instantly recognize what melamine dinnerware is. They feel hard and smooth like ceramic, but they weigh much less. It’s those plastic plates and bowls you can drop on the floor many times without shattering.

At home, people tend to choose the bright colored dishes from it. At restaurants, they prefer white melamine plates because it makes the food stand out more.

Light weight and great for clumsy kids and waiters, so what’s not to love?

There are toxic, cancer-causing compounds all around you. In fact, the mouse or phone in your hand at this very moment contains some pretty nasty stuff which is dangerous to human health.

But only dangerous if it leaches off and you ingest it.

That’s why gadgets, building materials, and even melamine furniture board (think Ikea) are all considered to be safe. The dubious compounds in them are generally not going anywhere.

The same holds true with food. In theory, you could eat off of a bowl made out of a solid poison and it would be OK so long as 100% of the poison stayed in the bowl.

Once you get poisons leaching – even if it’s only 1/1000th of 1% coming off – you can run into some serious medical issues. 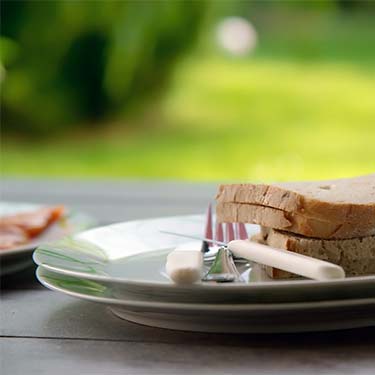 Before we even get into the science, consider the following 3 common sense observations about melamine tableware that you do not need a PhD or clinical study to understand.

If you have any of these old plates in your cupboard, take a close look at them. If they’ve gotten use over the years then you will feel and see lines across the surface from knives and forks scraping it. When that happens, where do you think the microscopic pieces are ending up?

White melamine utensils do stain sometimes. Coffee cups, bowls, and anything else made out of it can do. What’s happening to it when you’re using abrasive sponges and detergents to get those reds and browns off? Stains or not, there’s also the high heat of your dishwasher running for 60 to 90 minutes, along with things clanking against each other in there.

3. Melamine is not microwave safe.

Many people are unaware of this or forget the warning on occasion. Even when followed, doesn’t it seem strange that it’s acceptable to pour piping hot food from the microwave or stove top – which might be hundreds of degrees – onto these melamine plates?

Just those simple observations alone should ring alarm bells in your head, that melamine dishes might pose side effects.

What the FDA says

Does melamine cause cancer? The FDA doesn’t even mention that word (nor tumor, carcinogen, etc.) in their Q&A page about using this material for eating surfaces and utensils. What danger they discuss is kidney damage. They don’t say normal levels of exposure are unsafe, but a few of the statements they make will raise major concerns among health conscious consumers. (2)

“It has been found that melamine does not migrate from melamine-formaldehyde tableware into most foods.”

So only “most foods” don’t do it? Is that supposed to instill confidence?!

But wait, that’s not the crazy part.

Their good news to report is that “only” 3 out of the 19 tested plates sold at retail caused migration. That’s 16%. Are those odds you want to gamble with when it comes to your kids, your baby, and yourself?

It gets even more ridiculous. They say it was “exaggerated conditions” which caused the leaching.

Oh really, tell us more about these crazy and extreme scenarios which led to it?

Does that really sound extreme? When you scoop hot mashed potatoes onto your plate, they may remain at and even above that temperature for a good ten minutes.

For “actual use” conditions they still reported leaching. Cold orange juice for 15 minutes in a resin cup had 10 PPB of contamination. It is true that amount is well the below legal limits.

Legal or not, some people want none!

They go onto to say that “extreme temperatures” of 160° F (71° C) for acidic foods should be avoided because it increases how much melamine is harmful, by breaking it down and increasing the amount that leaches into your food.

Again, what follows is another common sense question that any woman or man who knows their way around the kitchen can answer…

You just baked a dish of lasagna (containing acidic tomato sauce) at 425° for 1 hour. If you scoop it out using melamine utensils or put it onto melamine plates within the first few minutes of being out of the oven, isn’t it safe to say that the temperature will still be above that “extreme” 160° threshold?

What the science says

The researchers used silverware (forks, spoons, knives) and tableware (plates, bowls, tumblers, cups) that were purchased at retail. It was said that “melamine migration was detected from all samples” that were tested. However the amounts were below the European Commission Directive 2002/72/EC. (3)

Study: Migration of formaldehyde and melamine monomers from kitchen- and tableware made of melamine plastic.

Many plastics are most dangerous right after they’re made, because that’s when they off-gas the most. This study done in Denmark tested a bowl, mug, ladle, and various plates and cups purchased at local retail stores. They did short term tests (3 successive exposures to food) as well as medium and long term. Their conclusion was “that continuous migration of formaldehyde and melamine takes place during the lifetime of these articles.” Your plates remain potentially dangerous even if they’re decades old (4)

The others were lab research, but this one looked at what happens to actual humans when they were exposed to the leached compounds. It was peer-reviewed and published in what is arguably the most prestigious medical journal, JAMA. (5)

16 healthy men and women, ranging in age from 20 to 27 years old, had their urine sampled before and after eating hot noodle soup. Some ate it out of melamine bowls while others used ceramic.

Here’s a look at how much melamine was in their urine when compared to the control group, who were using ceramic bowls… 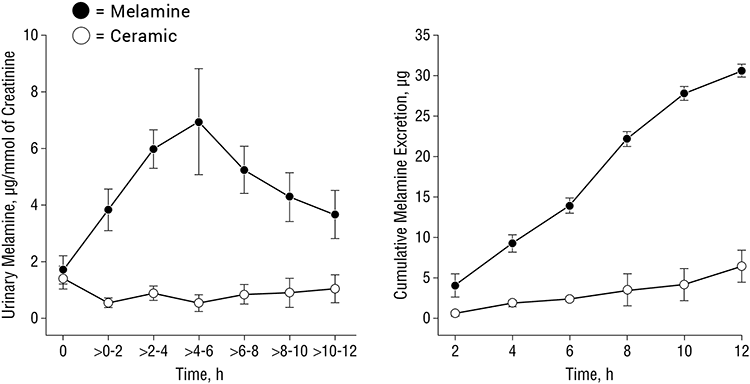 Is it safe or not? 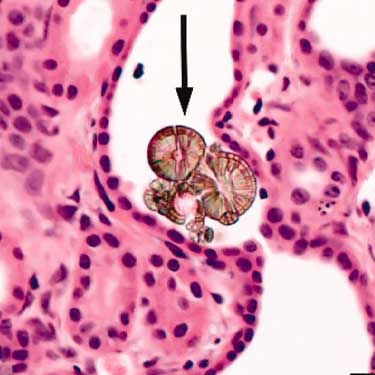 Yes it’s 100% safe. Just like the BPA in your baby bottles and the pesticides in your food.

Or at least, that’s the official position.

If you beg to differ with that mindset, then you should consider an alternative to melamine plates and cups.

Even though the amount that ends up in your food is legal and considered acceptable by government standards, scientists are clear that the long term implications of low level exposure in humans is unknown. In high amounts, it’s already certain to be poisonous and suspected to possibly be cancer causing.

According to the World Health Organization, in animal studies the small crystals which leach off actually block the microscopic tubular structures within the kidneys. This increases the formation of kidney stones and can lead to kidney failure or even death. (7)

Cancer risk has not been established in humans, but the WHO’s International Agency for Research on Cancer (IARC) has concluded:

“…there is sufficient evidence in experimental animals for the carcinogenicity of melamine under conditions in which it produces bladder calculi.”

They said this because most of the male rats test developed tumors in their bladder when they were fed dosages equal to 4,500 ppm for 2 years. (8)

As is often the case, the low tech and less modern solutions are probably safer. Ceramic pottery has been used by humans longer than history can date.

Avoid those made in China and other dubious countries. All of us here at Superfoodly use ceramic dinnerware which is made right in the USA.

Best of all, it’s suprisingly affordable.

We are talking about Fiestaware. Homer Laughlin out of West Virginia has been making it since 1936. We prefer the white because: 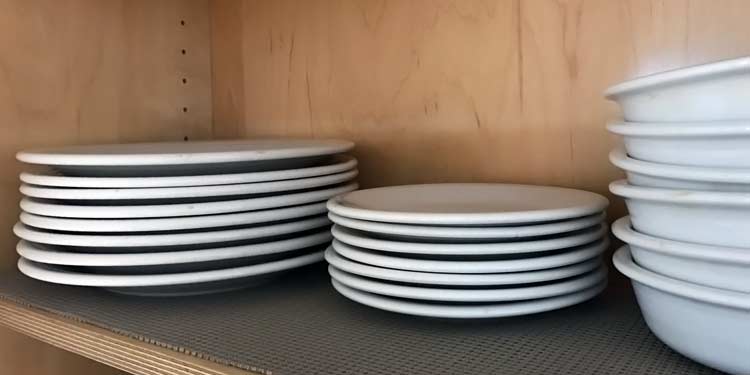 To start out, order a few of the 5-piece place settings, getting one for each person in your household. Don’t forget to get some for your guests, too.

As far as any melamine resin dinnerware currently in your cupboard, that can go in the rubbish. It’s not recyclable.