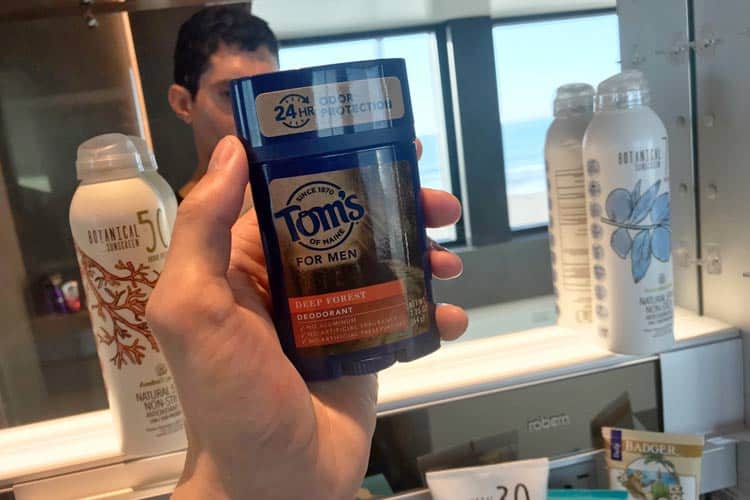 Founded some 50 years ago by Tom and Kate Chappell, today it may be the best known brand within the personal hygiene category.

That’s thanks to Colgate-Palmolive, who bought them out in 2006. Given Colgate’s size and distribution, you’ll find it everywhere.

They still strive to make products with natural ingredients that are usually vegan, however that doesn’t necessarily mean everything inside is the good stuff.

Does Tom’s of Maine deodorant have aluminum?

Out of the 32 varieties of deodorant and antiperspirant that Tom’s of Maine makes, 25 are aluminum-free. The 5 varieties which contain aluminum chlorohydrate are antiperspirants. Those consist of Coconut Lavender, Natural Powder, and Fresh Meadow for women, as well as Mountain Spring and North Woods for men.

If you want a good deodorant from Tom’s that doesn’t contain aluminum or other controversial ingredients, then head over to Amazon and check out this variety for men and this one for women.

Natural ingredients to be wary of

Aluminum is a perfect example of something which is natural but may not be good for you.

In addition, there are several other lesser known natural ingredients we would recommend avoiding that are commonly found in this category.

Similar to our recent piece on Jason toothpaste and tea tree oil, a number of Tom’s deodorants for women contain lavender oil.

It may smell nice, but did you know it’s a potent phytoestrogen?

So much so that it has been linked to gynecomastia (breast tissue growth) in teenage males. That’s according to a study done by researchers from the NIH and University of Colorado. (1)

To demonstrate just how potent of a phytoestrogen lavender oil is, they measured its biological effect versus actual estrogen (estradiol) in cultured human cells: 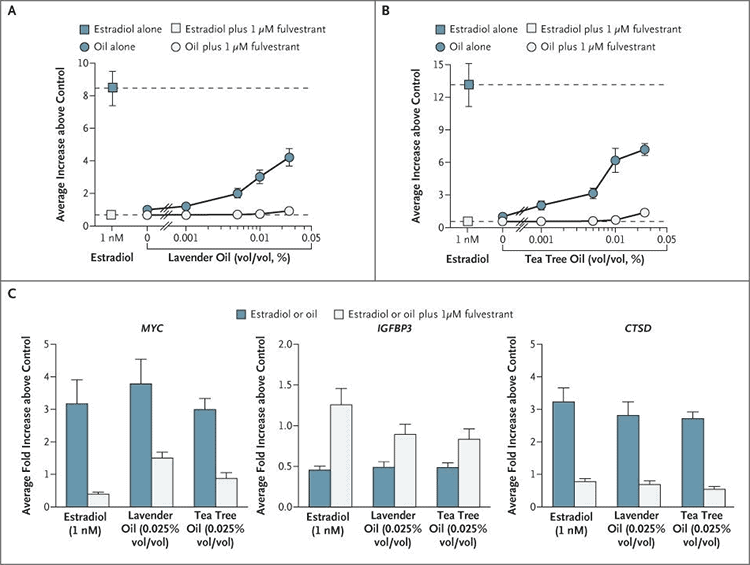 Tom’s Wild Lavender deodorant is not a good choice because of this. However, that may not be the only one with questionable safety. Several list “Natural Fragrance” on the deodorant ingredients label and the Tom’s of Maine website gives this definition as to what that means:

“A blend of essential oils, extracts and other natural fragrance ingredients”

Tom’s men’s long lasting wide stick deodorant comes in Mountain Spring, North Woods, and Deep Forest scents. They smell good but if you look at the ingredients in these deodorants you will see:

It is relatively well-known in endocrinology research that hops demonstrates “powerful estrogenic activity” in research.

Yes, the same hops that is in beer. This may be one of the reasons for man boobs jokingly being associated with heavy beer drinkers. Perhaps there is some truth to that.

The good news for beer drinkers is that the 8-prenylnaringenin in hops, which is one of the better known phytoestrogens in hops, is only found in low levels in beer. (2)

Given the many unknown safety concerns about hops and its effects on endocrinology, you will want to avoid Tom’s of Main deodorants which contain it. Maybe for a post-menopausal woman wanting phytoestrogen therapy it’s not bad, but for men, it is almost never desirable!

Fortunately, one of Tom’s newer deodorants for men does not contain hops. It’s in the grey tube (not blue) and the scent is Cedar Peak. You can get it on Amazon. Read the reviews of how well it works.

Is Tom’s of Maine safe?

Generally speaking, Tom’s is a good deodorant which avoids artificial ingredients and scents. However, safety concerns linger over their versions containing aluminum, as well as natural phytoestrogens.

Sure, even those versions are probably better for you than Speed Stick or Degree, but that doesn’t mean they’re good for you.

To play it safe, stick with the versions of Tom’s that don’t use aluminum, lavender oil, or hops.