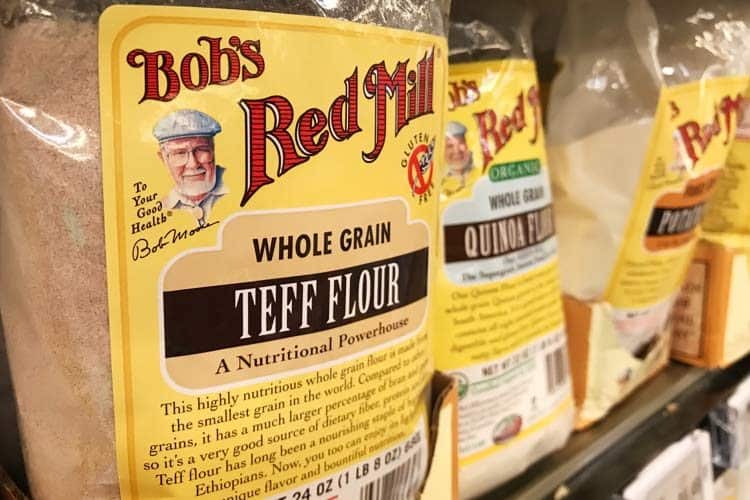 Have you ever had the pleasure of dining at an Ethiopian restaurant?

If so, then you certainly haven’t forgotten that delicious spongy bread. It’s made from this grain.

What is teff flour?

Native to Ethiopia, teff is a gluten free grain. It’s been used as a staple there for thousands of years. When ground into a flour, it’s good for making breads, pizza crusts, tortillas, muffins, and any other baked good one may normally make with wheat.

The most famous use for teff flour is to make injera. That’s the name of the Ethiopian spongy pancake-like bread. It’s made by fermenting the flour for a couple days.

In Amhari, which is one the Ethiopian Semitic languages, the word teff means “lost.” That’s because it’s the smallest grain in the world. It takes nearly 150 teff grass seeds to equal the size of just one wheat seed. They’re so tiny, many get lost during harvest if care isn’t taken. 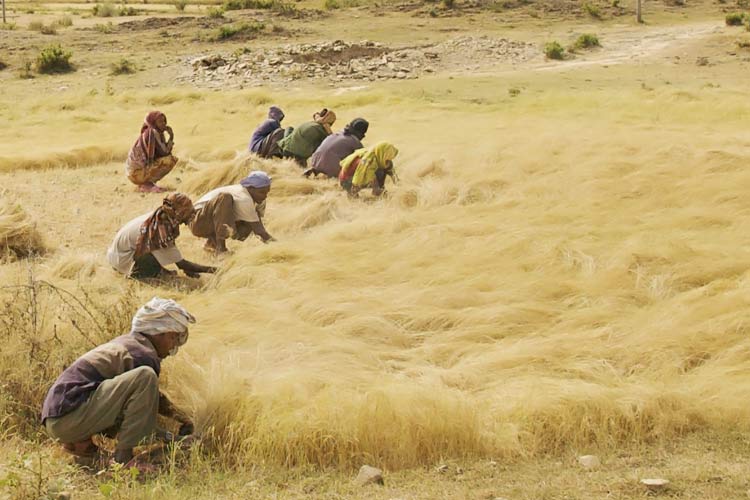 These men and women are harvesting the grain by hand in the northern Ethiopian Highlands. Photo by A. Davey via Flickr [CC by 2.0].

What teff flour tastes like is earthy, savory, and slightly sweet. Many say it’s nutty and some liken it to that of hazelnut. Unlike rice flour which has almost no flavor, teff is strong. Lighter in color than standard brown teff, the ivory kind is milder.

Injera, the Ethiopian bread made with teff, tastes like a hearty sourdough. That trait comes from fermenting the flour with yeast, as it’s normally not sour. 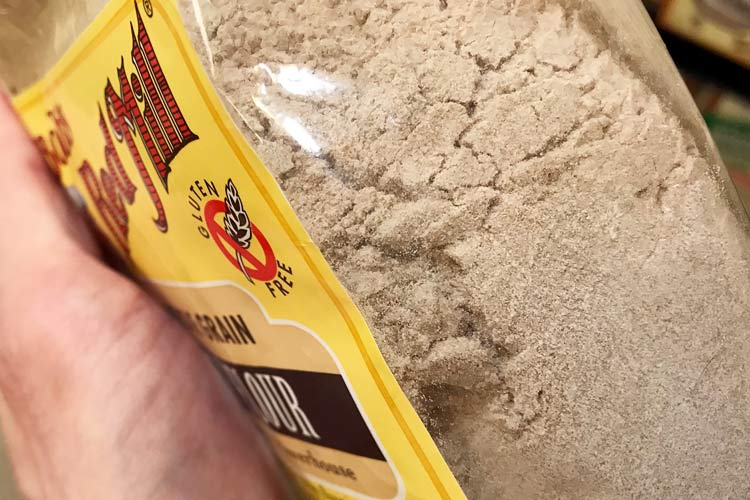 The texture of the flour made from teff is very fine, similar to that of wheat. It’s light brown when raw and can become darker with baking.

Because Americans are more accustomed to refined white grains that have a neutral taste, many teff recipes will call for only a 25-50% mixture, with the rest being wheat or a gluten free grain. If you like hearty, go for 100%.

What makes bread spongy is normally the wheat protein known as gluten. This is why most GF breads have to use eggs. The vegan versions made with just rice flour are often dense and hard.

How to make gluten free bread soft and fluffy without eggs? The secret is to use teff flour. It replicates the spongy texture of wheat.

2. High protein for a grain

Cereal grains, which are those that come from cultivated grass species, derive most of their calories from carbs. With up to 15% of the calories in the form of protein, teff is on par with whole grain wheat flour. It has 80% more protein than rice and double that of corn.

Teff has the same amount of protein as quinoa, which is not considered a grain but it is a gluten free superfood prized for its protein content. 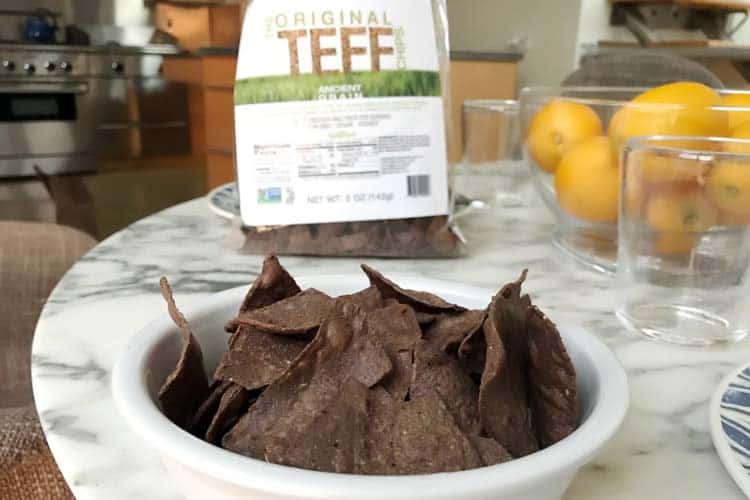 While fried snacks are not healthy, using teff flour to make tortilla chips can be healthier versus corn flour, which contains more carbs and lower mineral content.

When compared to most other grains like wheat, corn, oats, and barley, teff flour has a higher concentration of the branched-chain amino acids (BCAAs). Those are leucine, isoleucine, and valine. Getting ample amounts are important for muscle recovery and growth following a workout.

Teff is considered a complete protein, as it contains all 9 of the essential amino acids and they are within acceptable ratios. (1)

4. More calcium than any other grain

When people think of calcium, images of milk and cheese conjure up in the minds of many, however plants are rich sources too. In fact, what elephants in Africa eat have a higher percentage of calcium than that of cow milk. Which is not that unusual for leafy greens.

Almost every other country has a lower DV for calcium and many believe it’s the powerful dairy lobby responsible for the US recommending such a high amount. (2)

It also has more iron than any other grain; 14.73 mg per cup equates to 82% of the US adult daily value.

Some sources report that the teff’s glycemic index (GI) is 74. This is incorrect, as that value comes from an in vitro (lab) test which is used to estimate starch digestibility. It is not a substitute for actual glycemic index testing.

That requires at least 10 healthy, non-diabetic participants who eat a given food and have their blood sugar levels monitored before, during, and after.

An actual glycemic index test for teff wasn’t performed until 2017. Sydney University in Australia conducted the test with 10 people who were fed a 50g serving. The glycemic index of teff is 57 and the glycemic load is 19.

Low GI foods are considered to be 55 or less and this grain is very close for that serving size. It’s comparable to healthy rolled or steal-cut oats and whole grain wheat, rice, and barley when consumed in small quantity. (1) (3)

The nutrition facts for Bob’s Red Mill teff flour, which is whole grain, lists 5g of fiber per ¼ cup serving (150 calories). That equates to 20% of the daily value for fiber.

An estimated 20-40% of the carbs in teff are in the form of resistant starches.

These are a relatively newer nutritional discovery and in short, they escape digestion in the small intestine. Some get broken down later in the large intestine.

Research suggests that resistant starches are good for lowering blood sugar after meals, improving insulin sensitivity, and therefore are good for type 2 diabetes. They also can promote satiety, which is good for dieting and weight loss. (4)

Calcium and zinc are the most touted minerals in teff, yet this grain also offers high amounts of other essential minerals. One cup of the uncooked flour has 89% of the daily value for magnesium, 83% for phosphorus, 24% for potassium, 47% for zinc, and a staggering 892% for manganese.

This is the nutrition facts label for Bob’s Red Mill teff flour, which represents the typical whole grain form. A ¼ cup serving of uncooked whole grain teff flour will have 150 calories, 1.5g of fat, 5g of fiber, and 5g of protein. With only 10 of the calories coming from fat, it’s a low fat food (93% fat free). How many calories there are in teff is comparable to the flours of wheat, rice, corn, buckwheat, and sorghum, when comparing equal weights of each. It’s lower carb versus corn and rice.

In Ethiopia, it’s as common as wheat is America. In the United States, Canada, United Kingdom, Germany, Australia, and pretty much everywhere else in the world, consumers are only starting to discover this grain.

Grocery stores which carry a good selection of Bob’s Red Mill flours are your best bet at finding it. That brand sells whole grain brown teff flour in a 24 ounce bag.

You can also buy Bob’s on Amazon.

Use it in just about any recipe you would normally use wheat flour. Bob’s is not organic and that’s typical. Organic teff is rare since most is imported from Ethiopia. 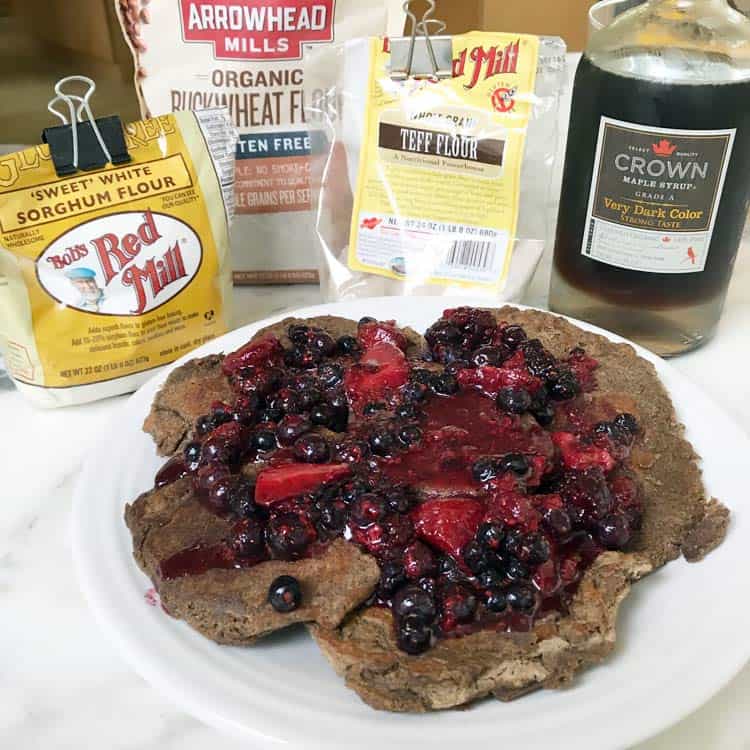 We use it to make gluten free pancakes, blending it with buckwheat and sorghum.

Not up for baking? Then check out the GF chickpea chili teff thins by Kashi. They’re available on Amazon.