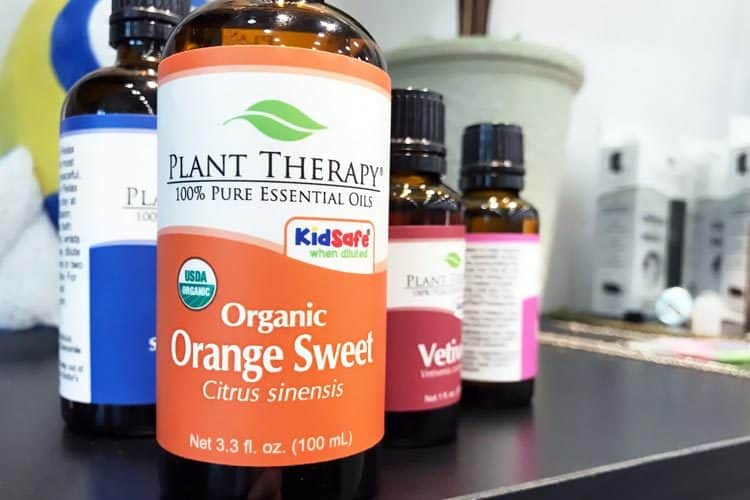 Yes, they are both the same thing. The most common orange consumed is the Citrus sinensis species. To differentiate it from other types, many essential oil brands will refer to it as sweet orange, because that’s how the fruit tastes. This is in contrast to oil from bitter orange (Citrus × aurantium) and neroli, which comes from its flower.

Sweet or regular orange essential oil comes from the fruit peel/rind. The chemical composition of it is at least 83% limonene, which is responsible for its well-known citrus scent.

There’s up to 9% linalol, followed by 4% myrcene, 1% for both alpha-pinene and sabinene, and less than 1% for the several dozen other compounds inside. (1)

You’re obviously not expected to know those. Why they’re worth mentioning is because it’s unusual for an EO to have 80-90% of its composition be a single chemical.

Most likely, any advantages orange sweet oil offers comes from the limonene.

The following health benefits are not proven. They are preliminary findings only and should be viewed as such. This product is not intended to diagnose, treat, cure, or prevent any disease.

Aside from being a food flavoring, sweet orange oil for skin care is the most common use. It’s added to lotions, creams, and perfumes to produce a citrus scent. However, the advantages may be more than what your nose can detect.

A university in Columbia conducted a blinded human study with 28 people who were split into 4 different treatment groups. One group received a gel containing the essential oils of orange and sweet basil. After 8 weeks of use, they experienced a 43% reduction in comedones (blackheads or pimples). (2)

It’s unknown how each oil type would have performed independently, but the next benefit lends further support…

Scientists are even researching its use as a fruit juice additive, to inhibit E. coli growth. (4)

While the root cause of acne is not bacteria, the species Propionibacterium acnes (P. acnes) worsens the redness and inflammation of acne nodules. Although not tested, one can hypothesis that this essential oil probably inhibits its growth, too.

Along with oregano and clove oil, orange is among “the most inhibitory against bacteria and yeasts” in lab research. (5)

Yeasts are single-celled fungi and one of the most problematic species for human health is Candida. It’s the culprit behind vaginal yeast infections and oral thrush. Candida overgrowth in the digestive tract is possible and seems to affect women more than men. 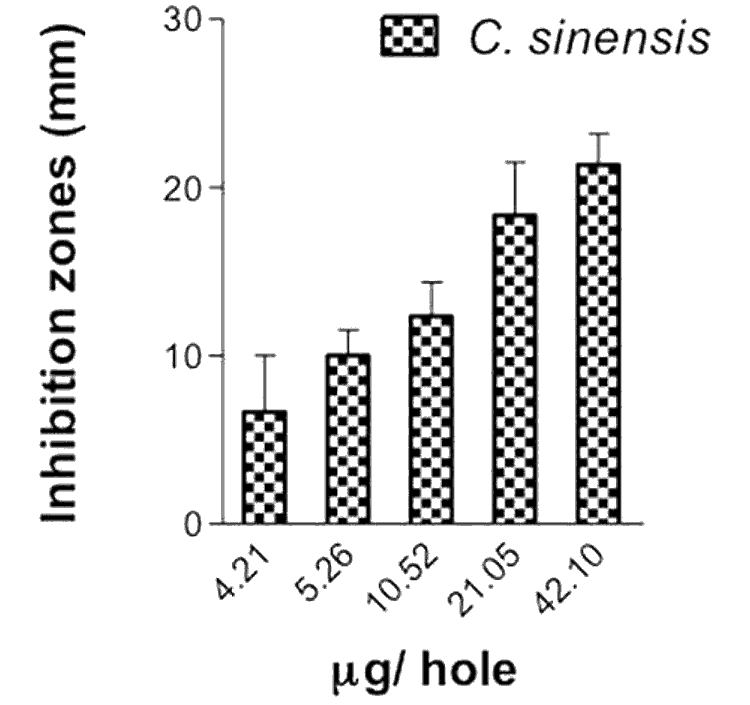 This chart shows how in a dose-dependent manner, orange oil inhibited the growth of Candida tropicalis in Petri dish experiments. The effective dosages were very small; 4.21-42.10 µg are less than 1/100th of 1%.

The effects against the most problematic species, Candida albicans, were less impressive but still noteworthy. (6)

Pioglitazone (Actos) is a type 2 diabetes medicine. Interestingly, it has been found to improve acne and rosacea in obese teen girls with PCOS. The improved insulin metabolism seems to somehow help their breakouts. (7)

Topically applied pioglitazone for rosacea and eczema doesn’t yet exist, but it is being researched for that purpose.

Published in 2017, the University of Barcelona did experiments with topical pioglitazone (PGZ) and ways to boost its absorption. 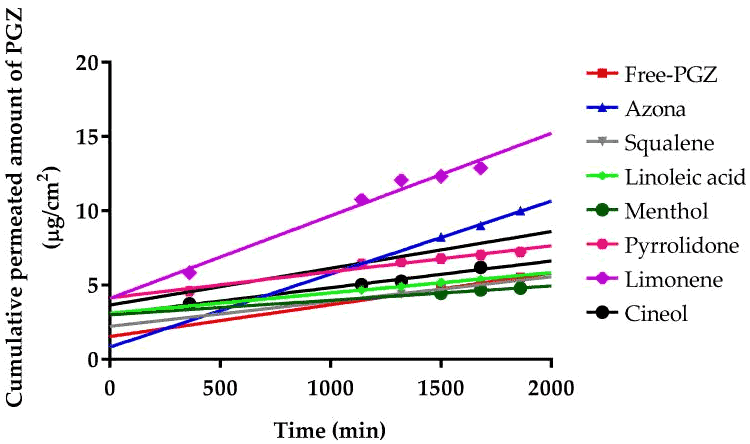 They found that limonene, which is the main ingredient in orange sweet essential oil, boosted skin permeability more than any other compound tested. (8) (9)

This suggests that skin care products with orange oil may be more effective at helping the antioxidants, peptides, and other anti-aging ingredients get deep into the skin.

As an herbal remedy in various traditional medicine practices, citrus rinds have a long history for use in treating inflammatory skin disorders. Only recently have scientists studied this use of orange oil.

Published in 2018, researchers out of India found that when limonene was used to pre-treat macrophages (a type of white blood cell) there was a reduction in the pro-inflammatory cytokines; TNF-a, IL-6, IL-1ß.

Their conclusion was that it offers “preventive potential” for the treatment of inflammatory skin diseases. (10)

When it comes to essential oils ORAC values, orange actually ranks very low. This is because there’s no ascorbic acid (vitamin C) in it. That’s a water-soluble compound which doesn’t end up in the pure oil, even if it’s cold-pressed.

That said, the advantage orange oil offers is that it’s safer to use in larger amounts, when compared to many others which irritate the skin with just a drop.

Not if it’s therapeutic grade. Food grade orange oil can be ingested in tiny amounts, when properly diluted according to manufacturer instructions. Because it’s so concentrated, it’s not safe to ingest straight.

When diluted, it can be used as a flavoring agent for chocolate, baked goods like cookies, marinades, and as a substitute for grated orange zest in recipes. According to the manufacturer LorAnn, 1 tablespoon of fresh orange zest can be substituted with 1/8th teaspoon of orange essential oil if it’s food grade.

On Amazon you can buy food grade from LorAnn. The ingredients are 100% essential oil.

After giving your dog or cat a bath, doing a final rinse with a 2% or less concentration of sweet orange oil will leave them smelling good. It also may offer anti-inflammatory benefits, which could help with their itching. 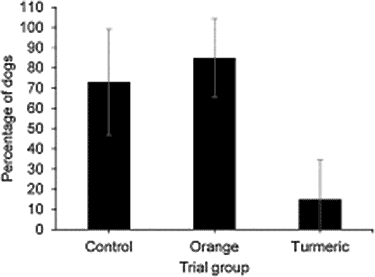 Contrary to what some sources report, orange essential oil is a bad choice as a tick repellent for pets. In 2018, the University of Bristol in the UK published a study comparing a 2.5% solution of it versus DEET and turmeric oil.

The percentage of dogs with ticks attached to their legs or belly afterward were 73% for the untreated group and 85% for the orange oil group. Meaning, the percentage with ticks actually increased when it was used.

The natural essential oil of turmeric fared much better; only 15% tick adhesion. (11)

If you want a good turmeric oil, check out this one by UpNature.

These 56 patients were split into two groups; fragrance and non-fragrance.

Despite having comparable vital signs prior to entering the waiting room, those exposed to sweet orange essential oil aromatherapy had significantly lower blood pressure, pulse, and respiratory rate during the surgical tooth extraction.

This was likely due to the anti-stress benefit it offered, according to the Dental Anxiety Scale (DAS) questionnaire they answered. (12)

Perhaps your dentist should have that Doterra diffuser running next time you’re in the chair!

Long prized in aromatherapy for its relaxing and anti-stress benefits, there is now clinical data to support sweet orange essential oil for sleep.

Published in 2017, Sungshin Women’s University in South Korea conducted a human clinical trial involving 70 elderly women. They were split into two groups; 35 as control/placebo and 35 received an “aroma necklace” filled with the essential oils of orange and marjoram. They were monitored for 4 weeks.

When compared to the control group, their sleep quality, duration, and satisfaction all increased. Anxiety and depression decreased. (13)

If you suffer from insomnia, using it in a diffuser before bed is worth a try.

Ammonia and hydrogen peroxide are caustic chemicals that not only smell bad and burn your skin, but also damage your lung cells and cause DNA mutations. (14) (15)

Using the essence of this citrus fruit for cleaning around the house offers a two-fold benefit; it smells great and might help inhibit bacterial and fungal growth.

Since it hasn’t been tested for food prep surfaces, you shouldn’t use it as a sanitizer. However, for general cleaning of windows, showers, floors, and countertops, sweet orange is a safer natural alternative to harsh chemicals.

How to make cleaner with orange essential oil is a simple homemade recipe; mix 1 cup water, 1 cup white vinegar, and 30 drops of the oil. Stir until it is thoroughly mixed. You can use it to clean windows, shower doors, ceramic, and other surfaces where you want a streak-free shine.

If you want premade instead of homemade, check out this product on Amazon.

The positive effects of essential oil aromatherapy on cognitive function has been seen in numerous studies, using different types of oils.

A Japanese university published a clinical trial to evaluate how elderly individuals with dementia and Alzheimer’s disease’s respond to aromatherapy.

In total, 28 men and women participated whose average age was in the mid 80’s. Among them, 17 had confirmed Alzheimer’s disease.

The trial consisted of a 28-day period without aromatherapy, as a control period.

After that, there was 28-days of aroma treatment consisting of: 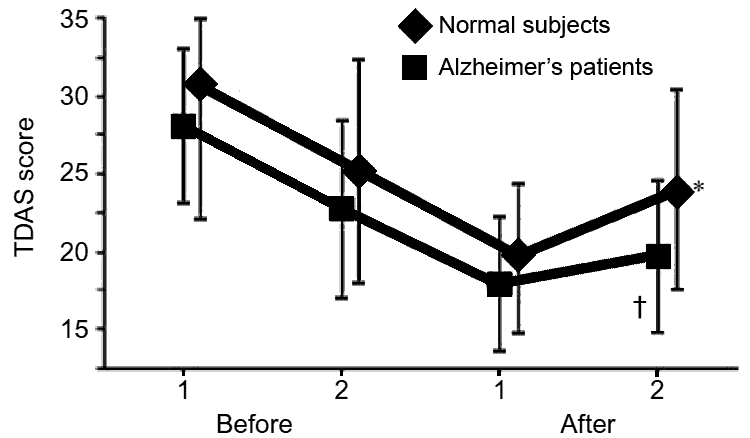 Using the Touch Panel-type Dementia Assessment Scale (TDAS) there wasn’t statistically significant changes for individual parameters, like word recognition, vocal orders, and so forth. However for the overall TDAS scale, there was significant improvement for both the Alzheimer’s and regular patients when aromatherapy was used.

Since multiple oils were being used, it’s tough to read too much into the results. Though it does suggest that sweet orange oil may good for your brain, beyond just boosting your mood with that pleasant scent. (16)

Potential antibacterial properties aren’t the only reason it might be helpful.

Research has reported that when orange peel extracts were given orally to diabetic rats:

In mouse models of dermatitis where limonene was topically applied, it was reported to “demonstrate significant anti-inflammatory effects in murine dermal inflammation and wound-healing.” It also reduced neo-vascularization, which is the growth of tiny blood vessels that can increase redness during the healing process. (17) (18)

No research exists specific to hair follicles, though some skin care benefits likely carry over.

If safely diluted in your shampoo or conditioner, sweet orange oil may help alleviate the itching and inflammation that comes with a dry scalp or dandruff. This is further supported by the clinical trial on acne, in which the essential oil reduced the number of blocked pores on the skin.

Unlike lavender and many other popular oils, the scent that sweet orange will leave behind on your hair is one that can work for both women and men.

Side effects of sweet orange oil

It’s generally well-tolerated when used topically for skin and hair care. If diluted, irritation and allergic reactions are rare. Unlike some essential oils which cause photosensitivity, meaning they increase sensitivity to sunlight, orange oil is not phototoxic.

Pregnant women and those who are breastfeeding should avoid using sweet orange essential oil, because there is not clinical safety data available during those times.

Unlike clove oil and several others which cause headaches when used for aromatherapy, that side effect is extremely uncommon with orange.

The oil is edible if it is food-grade. Small quantities are safe to eat as long as they are diluted per manufacturer instructions.

Sweet orange oil is safe for cats and dogs when diluted and applied topically, such as during bathing. Ingestion by pets is not recommended.

In prior years when top brands like Doterra, Aura Cacia, Young Living, and Plant Therapy published their top 10 or bestsellers lists, you never saw this one on it.

Thanks to the versatility of uses including scent, household cleaner, skin care, hair care, and culinary, sweet orange essential oil is becoming very popular. Most retailers that sell oils should carry it in-store, including The Vitamin Shoppe, Whole Foods, and some CVS locations. Major grocers like Kroger and Walmart often carry the edible version in the baking section, such as the one made by LorAnn. 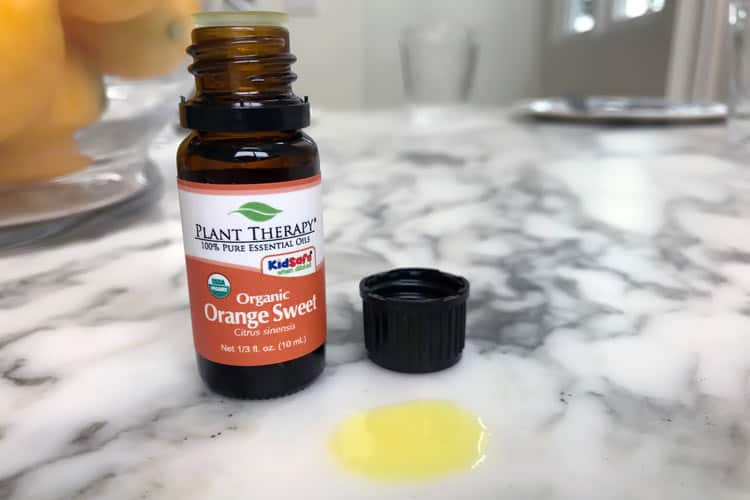 Plant Therapy is one of the best brands to buy. They make a USDA certified organic orange sweet oil that is available in a 1 oz and 3.3 oz size. You can get it on Amazon.