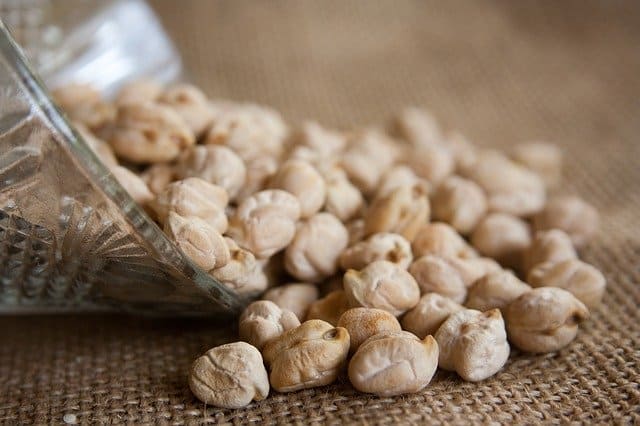 Side Effects of Eating Hummus

Whenever anyone thinks of starting a healthier lifestyle, one of the first things that come to mind is what healthy food they can intake. Hummus, which is basically an Arabic word for chickpeas, is one of the most loved and preferred snacks that people eat.

The origin of hummus is known to be dated way back to the 13th century, found in the Ancient Middle East, and has now become a famous dish worldwide. It is very simple to make, all you need to make Hummus is mashed chickpeas blended with garlic, tahini (sesame seed paste), lemon juice, and etc. to give it the scrumptious flavor and it’s topped with olive oil which adds to taste. It’s considered a dip served as an appetizer majorly served with pita bread, vegetables such as carrots, and cucumbers or chips on the side.

The reason why this dip is known to be helpful in weight loss is that hummus is a low-calorie meal, containing no sugars and a reduced amount of fat. It has a high protein content and apart from that it also contains iron, vitamin b6, sodium, potassium and etc.

Generally, a 100-grams portion size of traditionally made hummus would contain the following nutritional values;

There are, however, different variations of how hummus is made so depending on whether it’s home-made or store-bought and the personal extra added ingredients, these values can vary.

How does hummus affect our body?

Hummus is the food of choice for a lot of people when they’re on a diet because apart from containing low calories, it has a mouth-watering taste. This dish helps is a weight loss-friendly food due to its ability in curbing appetite along with the low calorie, high protein content that it contains.

It’s also low in glycemic index so if you’re diabetic you can still happily enjoy a plate of hummus without worrying about your blood glucose rising up! It has antioxidants properties as well as it contains olive oil as one of its ingredients which helps to fight inflammation and it’s also good for the heart.

Too much hummus problem 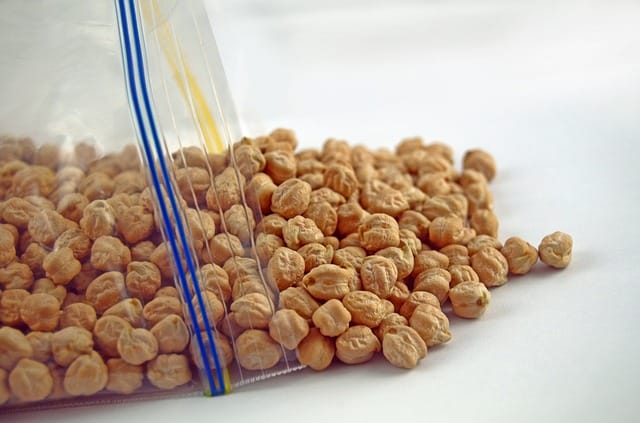 Even though hummus is known to be a healthy food option, if you eat it more than necessary then it’ll have its own negative effects. Written below are a few of the problems that may arise in association with eating hummus excessively:

One of the reasons why you shouldn’t have too much hummus is the amount of sodium content it contains. A normal single serving of hummus contains salt ranging from 40-200mg, some of the commercial pre-made hummus in stories however contain higher salt content than the daily recommendation so be careful and look at the nutrient values before buying it next time at the store.

Consuming a high amount of sodium can increase the risk of developing a high blood pressure which can further lead to heart problems or even a stroke. So if you’re someone who’s diagnosed with high blood pressure or has a family history of heart conditions it is better to avoid having hummus frequently.

However, you can work your way around having hummus more often in a few ways such as making it yourself at home so that you’ll be in control of the salt quantity, exercising more frequently plus increasing the take of green vegetables to counteract the harmful side effect of the salt content in hummus.

If you’re on medications such as beta-blockers then you’ll already have elevated potassium levels so having control over your hummus intake is important as it contains a high amount of potassium in it as well. 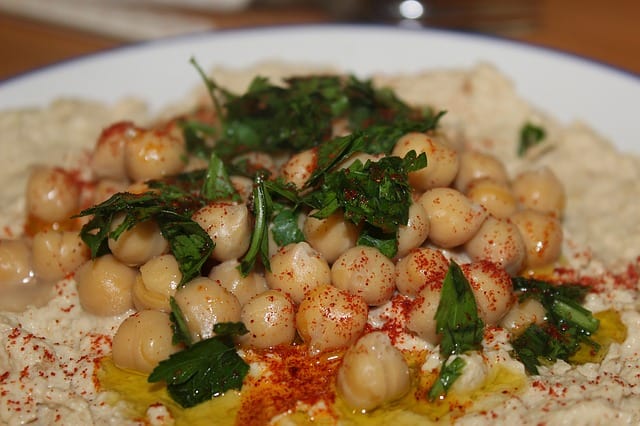 Hummus is generally healthy when consumed in moderation, especially if it is homemade. However, if you don’t have the time to make your own and use store-bought hummus then you’ve got to look out for the ingredients.

Each brand has its own separate additional substances that they include, some have a high sugar content which can result in a blood sugar rise and it can be bad for you in the long run leading to an increase in your weight instead of loss.

As hummus is a dish that can be easily modified, some brands use preservatives like potassium sorbate, other artificial additives, and unnecessary flavors which turn it into an unhealthy snack instead. Instead of olive oil, some companies add soybean or sunflower oil which are highly processed oils that you should undoubtedly do your best to avoid.

This is the reason why it’s very important to look at the listed ingredients written on the pack and refrain from buying from brands that contain unneeded chemical constituents when you’re off to get yourself this tasty creamy and nutty treat.

A small percentage of people tend to be allergic to legumes including chickpeas, some are even allergic to tahini which is basically a sesame seed paste. If you experience itching, nausea, abdominal pain after having hummus, it’s best to go to a doctor and get it checked out.

The chickpeas part of hummus contains purine which breaks down to produce uric acid. If you consume a high amount of chickpeas that can result in the production of excess uric acid which can accumulate and form into uric acid crystals and deposit in the joints, mainly in the big toe.

Chickpeas also contain oxalates which get excreted out through the urine normally. However, if hummus is eaten at high levels then oxalate levels can rise up and start depositing in the kidney causing the production of a type of kidney stone, calcium oxalate stones. 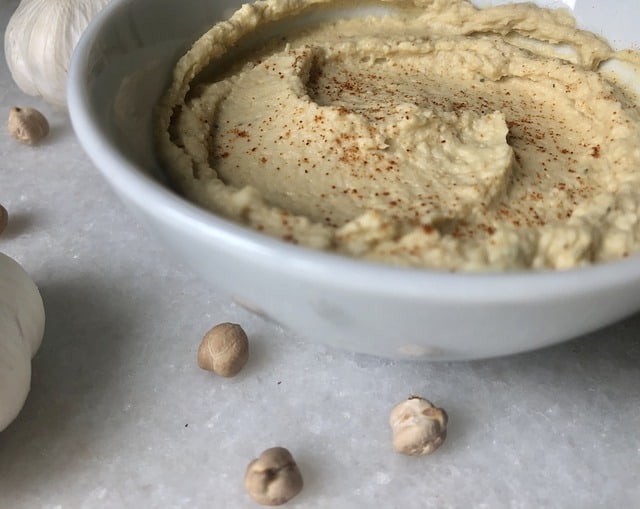 Chickpeas are the major component of hummus which can be hard to digest for a lot of people. If you experience bloating, stomach pain, or acid reflux after eating hummus it’s probably best to not eat the tempting dish anymore until you get it checked out by a doctor.

It is possible to train yourself to eat more fiber without your stomach being upset. You can start off with taking just two to three bites with plenty of water alongside, slowly increase the amount of the hummus you eat as long as you’re having no stomach problems because of it. 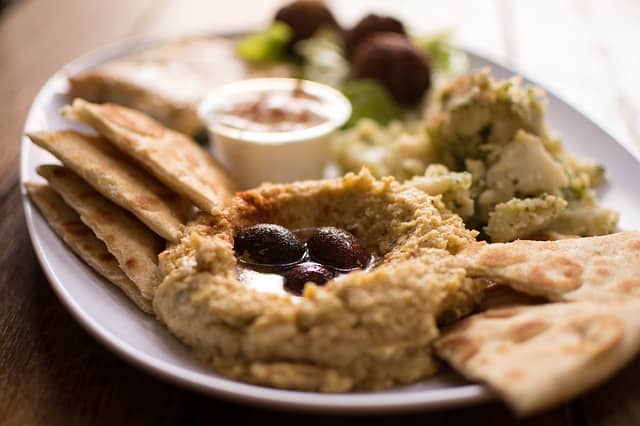 Hummus is helpful if someone is on a weight-loss journey but an excess of anything no matter how healthy can be harmful instead. Tahini, which is one of the components of hummus is what increases the fat content, mainly healthy fat but in high levels that may lead up to weight gain instead.

Homemade hummus is not that high in calories, however the same cannot be said about store-bought ones so limiting yourself to only a few bites instead of as a whole meal is important if you’re someone who has hummus daily.

Some of the store-bought hummus were tested and found to contain a harmful chemical called “glyphosate”. It is an herbicide used mainly to dry fields of beans, wheat, etc. but crops that stay wet for a long time such as chickpeas, tend to soak up glyphosate more readily. So the next time you’re buying hummus, make sure to opt for companies that are organic and low in glyphosate.

Apart from sodium and protein, hummus is also rich in folic acid and iron. Folic acid is a vitamin essential to the human body but a surplus of it due to overconsumption of hummus can lead to nausea, bitter taste in the mouth, and trouble sleeping or concentrating.

Iron is a mineral needed by the body for growth and development however and increased levels of it may cause symptoms such as constipation, dark stools, nausea, and vomiting. 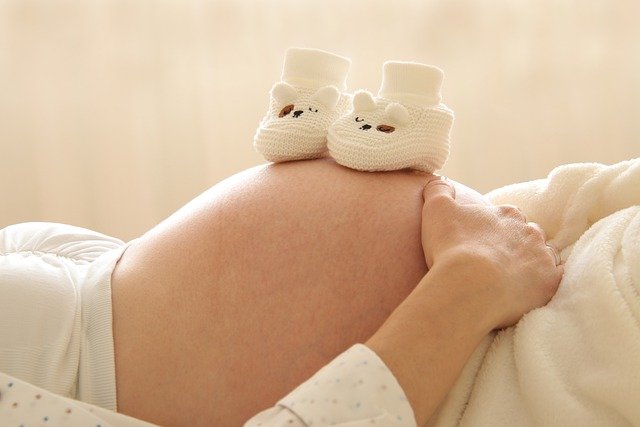 If you’re pregnant and have a craving for hummus then ask someone to make it at home for you. As packaged hummus have a risk of containing and bacterial organism known as listeria which can be dangerous as it can cause listeriosis a disease that causes the immune system to weaken up leading to fever, stiff neck, convulsions.

This can pose as a threat to both, the baby and you. So make sure to not eat hummus brought from the store and eat the homemade version instead during pregnancy to prevent any adverse effects.

Gluten Components in the Mix

Traditionally, hummus does not contain hummus hence it doesn’t come in the way of people who are allergic to gluten. Some packaged hummus however have gluten as a part of the ingredient which is crucial to look out for if you’re gluten-sensitive.

Consumption of hummus in a generous amount can cause flatulence and stomach discomfort. Avoidance of these symptoms is very simple, all you’ve got to do is focus on not eating more than what’s recommended portion size per day and opting for hummus made at home or if it’s from a brand then choose one with no added chemicals and additives.

What Can You Have Other than Hummus?

There are multiple other options available for you to choose from when it comes to dips and healthy snacks. Rather than making a particular type of snack your go-to option every day, you can switch things up to ensure that you don’t overdo your hummus intake. Here are three different snacks that you can try instead of the traditional hummus. 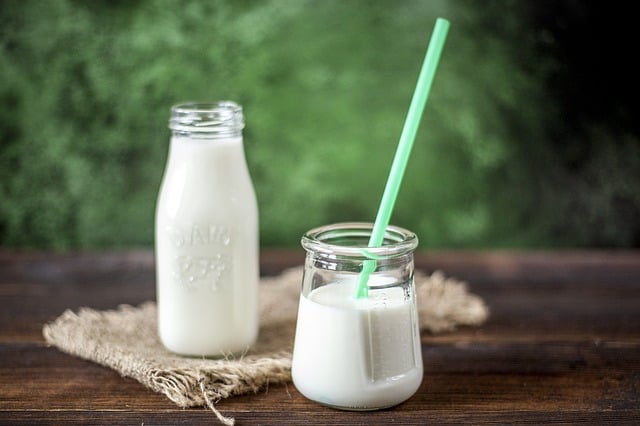 It is also known as “strained yogurt” as its made by fermentation of the yogurt In tanks with straining of whey resulting in a thicker consistency and increased protein content. Though the taste is quite different from hummus, it’s still a delightful snack you can eat to stop yourself from overconsumption of the latter dish.

This is an incredible alternative to the traditional hummus especially if you’re allergic to tahini. In this form of hummus, almond butter is used instead of tahini, and the taste is so similar that you won’t even realize that the ingredient was changed!

To make your hummus, even more, healthier, you can add in different vegetables like carrot, sweet potato, shallots. This will enhance the flavor of your favorite dish even more and this way you can balance out all the nutrients as well.

Hummus is no doubt a finger-licking meal with a lot of benefits and the perfect meal if you’re looking to eat healthy as it has the quality of being an anti-oxidant, helps in controlling blood sugar levels, and much more but it can also have some negative effect if it’s eaten more than necessary.

However, if you make sure to not get store-bought hummus which has added chemicals that are harmful to the body, and instead make it yourself at your home along with self-limiting yourself with the amount of hummus you intake then you’re good to go!

The conclusion is that no matter how healthy a food is, it always possesses harmful side effects if not taken in moderation.