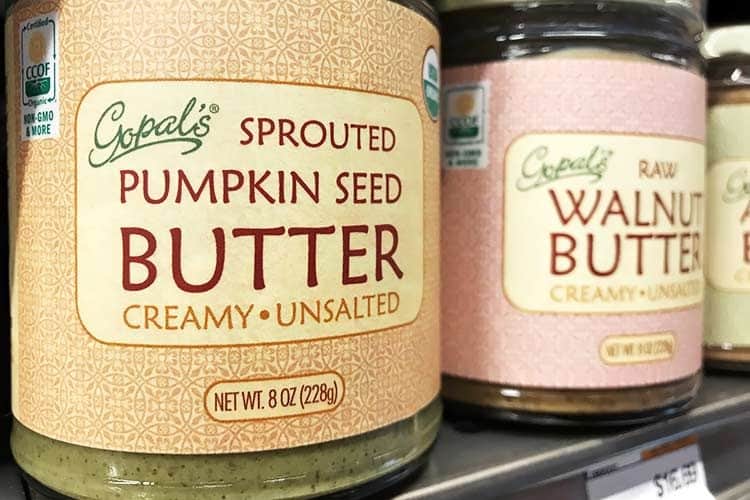 The days of Jif and Skippy may have been your parents’ generation, while yours is almond butter.

What nut butter will your kids – or grandkids – supplant yours with?

For superfood aficionados who own a Vitamix or similar, homemade pumpkin seed butter recipes have been a cult favorite for many years.

Now stores are starting to sell it premade. Many people are making the switch from peanut and almond, realizing it’s a nut-free nut butter alternative which offers several advantages.

Unlike the hard and fibrous white-shelled seeds you pull out of jack-o’-lanterns at Halloween, these butters are made from cultivars which contain shell-less seeds. Commonly called pepitas, the small raw seeds are olive green in color and soft to the chew. 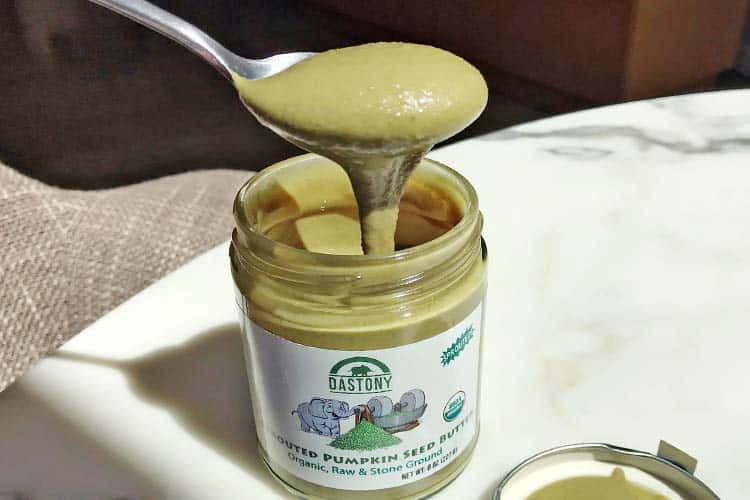 Pumpkin seed butter tastes just like raw pepitas, without the crunch. It’s a delicious nutty flavor that’s a bit earthy, with only a subtle sweetness. Unlike nut butters, the natural oils don’t separate much, leading to a more consistent creamy texture on the tongue.

Unlike almond, minimal to no stirring is required.

Since it’s not sweet like almond butter, the drawback is that choosy children (and some adults) may not fancy the flavor. Some brands of pepitas butter add salt and sugar to overcome this, however that’s unnecessary.

While earthy on its own, the natural pepitas taste balances out when you combine it with fruit jam, berries, protein powder, or just about anything else you eat with it.

The true allergy prevalence for peanuts – which are not nuts but actually legumes – is often exaggerated. Still, that doesn’t change the fact it’s a relatively common food allergen; 1% to 5% of the population is allergic, depending on the source you cite. (1) (2)

Almond, cashew, hazelnut, macadamia, pistachio, pecan, and walnut are all tree nuts. Allergic reactions as documented by immunoglobulin E (IgE) antibodies is less than 2% for these, however oral allergy syndrome (OAS) is up to 11.4% for tree nuts. (3)

According to The Journal of Allergy and Clinical Immunology, allergic reactions to pumpkin seed are so rare that up until 2017, the allergens in them responsible had not even been studied! (4)

Most nut and seed butters list a 2 tablespoon serving on the nutrition facts label.

This can be a bit deceptive because fillers, like added oil and sugar, will throw off the numbers. How much (or how little) water there is can make a higher calorie nut seem lower.

The best way to compare protein content is to look at the raw seeds and nuts. Per 200 calorie serving, here’s how much protein you get with each type:

With the exception of pure peanut butter, pumpkin seed butter has more protein per calorie than all other common seed and nut butters. It’s 17% more protein than almond butter and 31% more than cashew butter.

A 2 tablespoon serving of pumpkin seed butter typically requires 1 ounce (28g) of the seed to make it.

Moisture content will affect how many calories there are in a standard 2 Tbsp serving of the butter. Jiva Organics raw sprouted pumpkin seed butter is 151 calories. The brand Dastony, which also uses raw and sprouted seeds, is 160 calories.

A 1 oz. serving of raw almonds is 163 calories. Cashews are 157. Peanuts are 161. The calorie counts for nut butters made with them tend to tack on an additional 20 calories, even if there are no added oils or sugars.

This is because they’re higher in fat, which is denser. So to fill 2 Tbsp, more calories are packed in there.

Assuming they’re all sugar-free and oil-free, the average 2 Tbsp serving of pepitas butter will be 15% fewer calories almond or cashew butter.

Not a huge difference, but every little bit helps with weight loss.

Among the seed and nut varieties most commonly sold, pumpkin seeds have the highest density of essential minerals.

A 1-ounce serving of pepitas, which is the same amount used to make a 2 Tbsp serving of seed butter, offers the following percentages for adult daily values:

While high in macronutrients, nuts and seeds are generally a poor source of essential vitamins. They only contain trace amounts of vitamin C and A. For B vitamins present, the daily value percentages are typically 5% or less.

What makes pumpkin seed butter healthy for you is the vitamin K content. Each ounce offers 18% of the daily value.

Cashew has 33% less than that. You don’t get any vitamin K from roasted or raw almond butter, peanut butter, or sunflower seed butter.

If you’re a fitness buff, the higher protein content isn’t the only thing that’s good for you. Pumpkin seeds are one of the richest sources of L-arginine.

L-arginine is a conditionally-essential amino acid. Meaning our bodies can make it, however certain health conditions may limit how much gets made.

It serves as a precursor for the synthesis of nitric oxide (NO). (7)

Bodybuilders and athletes use supplements to try and boost nitric oxide because it can benefit performance. It’s a signaling molecule of the vascular system, which can amplify blood flow and nutrients – like glucose and protein – that are delivered to the muscle cells during and after a workout.

While still debated, there is evidence to suggest that higher intake of arginine might help boost nitric oxide levels in the blood. (8)

Arginine also has been found to stimulate higher levels of growth hormones, which may also support muscle growth and physical endurance. (9) (10)

Not conclusively proven, but there is promising clinical evidence.

In a double-blinded and placebo controlled trial of 50 men who had erectile dysfunction (ED), those who supplemented with 5 grams of L-arginine daily experienced a “significant improvement” in their sexual function. (11)

This is another reason why it’s one of the best superfoods for men. This potential benefit makes sense when you think about; it supports nitric oxide production, which is directly related to blood flow… including down there.

About 3.5 ounces of pumpkin seeds will contain that same 5g dosage of L-arginine.

Of course, you’re unlikely to eat that much seed butter made from pumpkins at a given time. Still, even an average serving packs a significant amount of L-arginine, especially when compared to peanut and nut butters.

If you buy a brand of pure pumpkin seed butter that’s sugar-free and oil-free, then the nutrition facts will typically look like this per 1 ounce serving; 151 calories, 13g of fat, 5g of carbs, 1g of fiber, and 5g of protein. 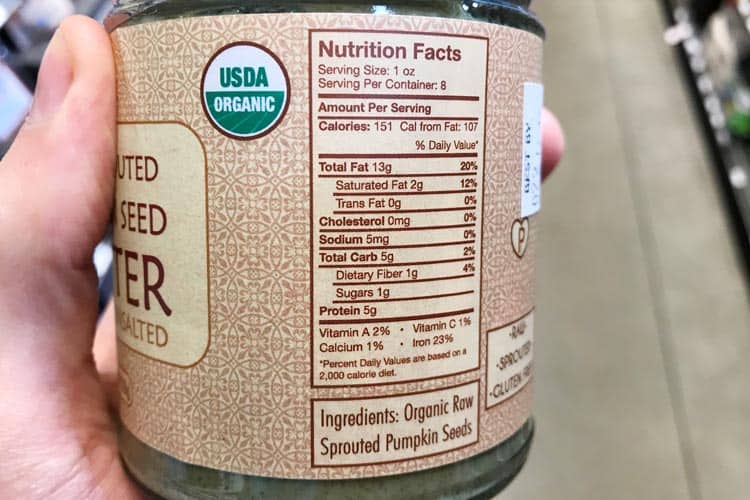 Above is a photo of the nutrition facts label for the brand Gopal’s. We spotted it for sale at Erewhon, an independent health foods grocer in Los Angeles. It’s also available on Amazon.

As parents and schools seek nut-free alternatives to peanut butter, the preferred choice has become sunflower seed butter. It’s the nut-free butter which tastes the most like peanut butter. Its drawback is that the dry roasted seeds are unusually high in acrylamide, a suspected carcinogen, and recipes typically require added oil to make them spreadable.

The best no-nut alternative is pepitas butter. Its has more protein and fewer calories than sunflower seed, as long as oils aren’t added. It can be made with raw seeds instead of roasted, which will reduce acrylamide exposure.

Mainstream grocers like Walmart and Kroger carry Sunbutter, which is a brand made from sunflower kernels. While that remains a viable alternative for those with peanut and tree nut allergies, these stores and similar currently don’t carry pumpkin seed butter. 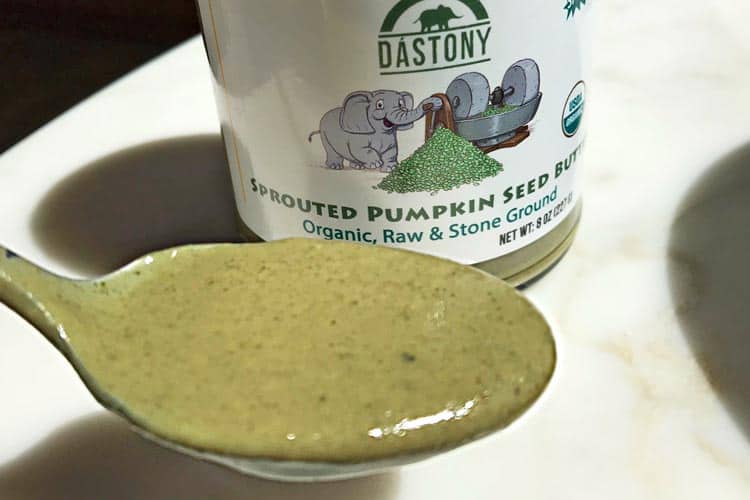 Specialty grocers with an emphasis on healthy eating, like Whole Foods and Sprouts, as well as co-ops, are beginning to carry raw organic and sprouted pumpkin seed butter. Good brands include Dastony, Radiant Life’s Better Than Roasted, and Jiva. The brand 88 Acres is not preferred, because it has added oil, sugar, and salt.

Since demand for a healthy nut butter alternative only seems to increase as time goes on, expect big brands like Justin’s, MaraNatha, and Barney to hop on the bandwagon sooner or later.

Meanwhile there’s always Amazon. Here is the link for Jiva Organics and Dastony. Both use sprouted raw and organic seeds. You can’t go wrong with either.