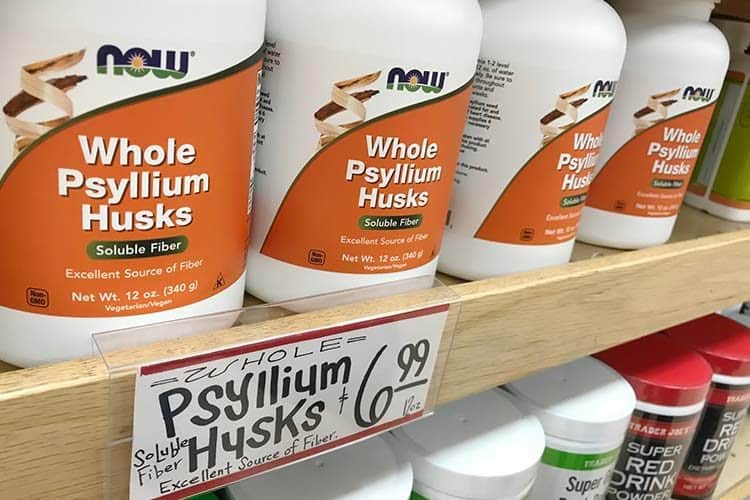 What Is Psyllium Husk? This Fiber Can Be Bad For Weight Loss

If you eat a whole food, plant-based diet, it’s almost guaranteed you are getting plenty of dietary fiber. More than enough.

However, we live in a world where grab ‘n go snacks and fast food comprise a large chunk of our eating. Not salads and veggies.

That’s why many Americans and those on a westernized diet are fiber deficient.

In turn, many manufacturers of cereals and protein bars are fortifying their products with added fiber from sources like chicory root and Jerusalem artichoke. For capsule supplements, this husk is a favorite.

It offers a double-edge sword; potential benefits for losing weight but for some, there are side effects.

What does psyllium husk do?

Psyllium husk or powder comes from the seeds of a medicinal grass; Plantago ovata. It’s commonly called blonde psyllium and desert Indianwheat. It grows in most of the northern hemisphere and is heavily cultivated in India, where it’s used for Ayurveda. It’s the active ingredient in Metamucil and many similar supplements that are marketed for appetite control and regularity. 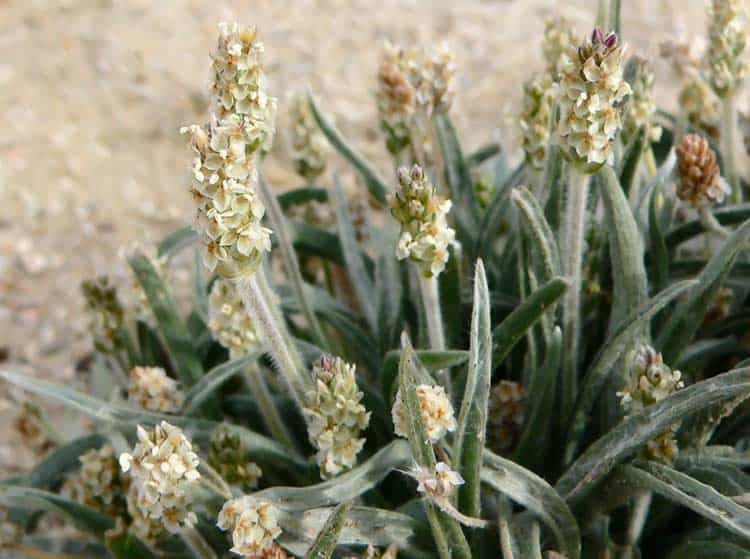 What the Plantago ovata plant looks like. Photo by Stan Shebs via Wikipedia [GFDL]

What psyllium husk does for the body is help relieve constipation and promote regularity. This is due to its high amount of soluble fiber, which can act as a mild laxative. It absorbs water to create a gel-like substance, which keeps stools softer by carrying water through the small and large intestine.

Psyllium benefits include lowering total and LDL cholesterol, which is the bad kind. It does this by binding to dietary sources of it in the digestive tract and carrying them through excretion. Clinical trials suggest that after 8 weeks of daily usage, LDL cholesterol can be lowered up to 7%. (1)

The amount of soluble fiber in psyllium husk is 6g per level tablespoon of powder. There is 1g of insoluble fiber, which means 85% of its total fiber content is soluble.

At 3g per Tbsp, psyllium husk is among the best food sources of soluble fiber. It’s significantly higher than African baobab fruit powder (2g) and dry oatmeal (0.25g) of the same weight.

The amount of calories will vary based on whether it’s whole psyllium husks or the refined powder. A serving of 2 level tablespoons for the whole husks is 35 calories. For organic husk powder, it’s 30 calories for 1 level tablespoon. Since fiber is not a source of calories, they come from carbs. Each has around 8g of carbs and 10 mg of naturally occurring sodium.

Those are the nutritional values for the supplements from NOW Foods. Below is their label for the whole husk version. 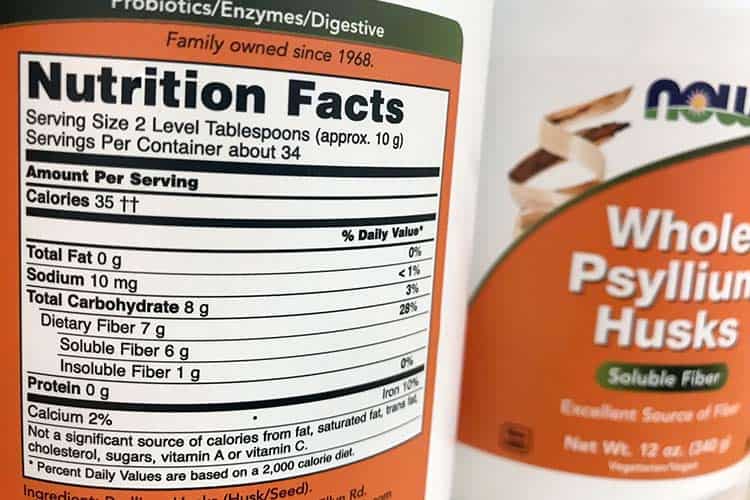 Most of these benefits are unproven. For foods that contain at least 1.7 grams of psyllium per serving, the FDA allows for the claim they “may” reduce the risk of heart disease, when consumed as part of a low-fat diet. The U.S. government’s MedlinePlus says it’s “likely effective for” lowering cholesterol in people with high cholesterol. They say it’s “possibly effective for” obesity, diabetes, diarrhea, irritable bowel syndrome (IBS), ulcerative colitis (UC), hemorrhoids, and high blood pressure. (2)

As part of India’s Ayurvedic medicine, psyllium is called snigdhajira and uses of it include chronic constipation, chronic diarrhea, excess mucus in the nose/throat, inflammation of the urethra, cystitis (bladder inflammation), colitis, stomach ulcers and inflammation. These uses do not have human clinical studies to validate them. You can read more about the theories of these benefits in The Way of Ayurvedic Herbs.

Side effect and dangers

What are the side effects of psyllium husk?

When taken in a dose of 5-10g up to 3x daily, psyllium supplements are generally without major adverse reactions. Gas, bloating, and abdominal pain may occur. Too much can cause loose stools and diarrhea. Since the soluble fiber absorbs high amounts of water, psyllium husk can cause constipation if you don’t drink enough liquids while taking it. (3) (4)

While higher fiber intake often correlates with more gas, surprisingly the evidence so far suggests that psyllium fiber is actually less likely to cause farting and that for many people, a decrease occurs with usage. (5)

Allergy to psyllium husk is uncommon but possible. It has been thoroughly documented in medical literature. Allergic reactions can include rhinitis, asthma, and anaphylaxis. It has been reported that the dust is a “potent inhalant allergen” and there has been at least one confirmed death from anaphylaxis after eating psyllium. That occurred to a relatively young 42 year-old woman. (6) (7)

Health care workers in nursing homes and hospitals may be more at risk because they are exposed to it frequently and for years, which can intensify the allergy. In a Spanish study of 58 workers, their positive testing for having a clinical allergy to the plant was 13.8% versus 8.6% for the non-exposed group. (8) (9)

Drug interactions are not well understood. Due to decreased GI transit time, psyllium husk, guar gum, and other food sources of soluble fiber can decrease the absorption of some medications. It’s possible but unknown if this happening with essential minerals, vitamins, and other nutrients.

One human study using radiolabeled iron supplements detected less iron in the body after consumption with psyllium for 4 days. (10)

In a study with rabbits given the type 2 diabetic medication metformin, usage of psyllium husk boosted bioavailability by 34%. This suggests that even though transit time may be increased, it may increase the absorption of some medications and nutrients. This could be a good or bad thing. (11) (12)

Gout may be helped by using psyllium husk powder. This is based on an 11% decrease in uric acid levels of diabetics in a study. However in a different study on cholesterol, one participant withdrew from the trial because their gout worsened. The doctor monitoring it said it was “possibly related” to the ingredient. (13) (14)

Pregnancy risks are unknown. It is believed to be safe to take Metamucil and other psyllium husk supplements while pregnant to help relieve constipation, though no human or animal studies have taken place during pregnancy or breastfeeding.

The biggest danger of psyllium may be for those who have GI diseases. While there is some evidence to suggest that it may help these diseases, low-fiber diets are often recommended for irritable bowel syndrome (IBS), diverticulitis, Crohn’s disease, ulcerative colitis, and intestinal pseudo-obstruction. It is still debated as to whether the soluble fiber in psyllium is good or bad for these and other GI disorders. (15) (16) (17)

If you have an abnormal GI system and want to use it for dieting, you should do so with extreme caution since it could worsen your symptoms. It is recommended you start with a low dose under the guidance of your physician.

While many use it as a supplemental source of fiber, dieting is probably the #1 reason people use it.

There are nearly 200 human clinical trials involving this food or supplements made from it in the PubMed database. Most focus on the lowering of cholesterol and other blood lipids. Only a fraction focus on body weight and composition. Among those, most are studying type 2 diabetics rather than overweight people who are otherwise healthy. 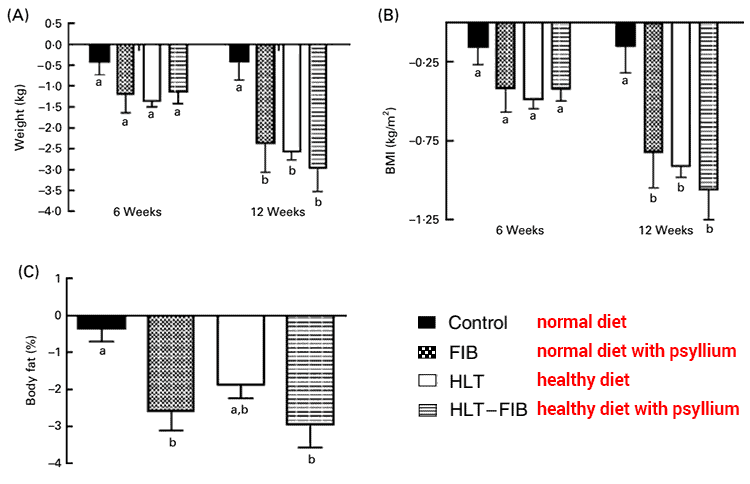 A 12-week study out of Australia was completed by 57 people. There were 32 women and 25 men, with an average-age in the low 40’s. They were divided into four groups with comparable profiles.

According to study, the healthy eating group with psyllium fiber supplement experienced the greatest improvement in body weight, BMI, and body fat percentage. After 12 weeks, they lost 13 lbs versus only 1 lb for the group on a normal diet. (18)

Similar trials, with up to 150 days of continuous usage, have reported statistically significant benefits for losing weight. While promising, there is not enough clinical data to conclusively prove this benefit. (19)

With short term usage, psyllium husk may work by helping to suppress appetite. The high fiber can help create a feeling of fullness in the stomach. Using psyllium long term may not work as well, if at all, because the body may get accustomed to this feeling. This is based on longer duration studies where weight loss was not associated with intake. (20) (21) (22) (23) (24) (25)