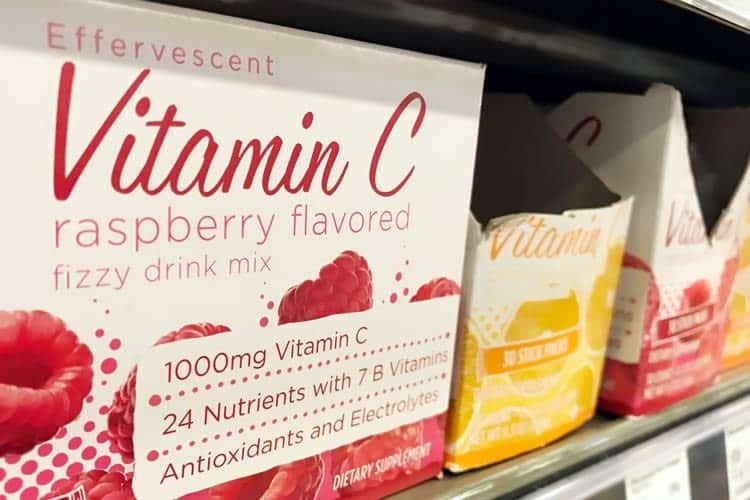 Pro-oxidants: Are Antioxidants Actually Bad For You?

What are antioxidants? In a nutshell, they “donate” electrons to unstable molecules which are known as free radicals (oxidants). This stabilizes them, so they are no longer reactive.

The oxidant is neutralized. It can no longer damage cells.

Based on that basic explanation, one often concludes that obviously, antioxidants are good for you. The more, the merrier. Right?

Unfortunately, it’s not always that simple.

In certain scenarios, too much antioxidants can be bad for you. While vitamin C in an essential nutrient and also a powerful antioxidant, it can have a pro-oxidant effect in the body and create new free radicals.

Pro-oxidants do the opposite of antioxidants. Instead of neutralizing free radicals, they promote their formation.

They do this by stealing electrons from cells in our body, which makes them unstable. This creates a vicious chain reaction; the cell which has had its electron taken will do the same to another nearby cell, in order to restore its own stability. This results in damage to the cells and their DNA.

Some pro-oxidants don’t take the electrons directly. Rather, they trigger other biological/chemical processes which cause the same effect to occur.

While they are mostly bad for you, pro-oxidants can have health benefits. The immune system will ramp up their production to kill pathogens in the body. The phagocytic cells will increase their oxygen uptake by as much as 20-fold, in order to generate more reactive oxygen species (free radicals) to destroy viruses and bacteria. (1)

Sources in your life

Using them to destroy a dangerous infection is a productive use by the body, though often times, our bodies produce them fruitlessly.

Science suggests that humans produce them in response to other diseases, even when they are not caused by bacteria, viruses, or fungi. Presumably, the body thinks pathogens like that are responsible, but they’re not. (2)

So instead of killing evaders, these new free radicals we generate just damage our own cells. They do nothing to help the underlying disease and in fact, make it worse be creating inflammation, which is a side effect that goes hand in hand with free radicals.

Most of these chronic diseases are without a cure, which is why it’s important to carefully manage them as effectively as possible under the care of a qualified physician. It won’t stop the increase in free radicals generated, but a disease under control should result in fewer being made.

We have more control over the pro-oxidants we encounter through our lifestyle and diet.

Alcohol, smoking, unhealthy sun exposure, anxiety, and even loud noise all act as pro-oxidants, as they all trigger ROS generation. With the sun, it’s limited more to the skin and eyes. With loud noise, free radicals form in the inner ear (lateral wall, organ of Corti, and auditory nerve) which accelerate hearing loss. (14)

With drinking, liver damage is really just the tip of the iceberg. The side effects are throughout the body. An estimated 3.5% of all cancer deaths are attributable to alcohol. Head and neck cancer, esophageal cancer, and breast cancer highly correlate with alcohol consumption. (15)

Pro-oxidants in food are prevalent, even in what most people perceive to be a healthy diet.

Is organic food a scam? Well consider how short the half-lives are for most pesticides: 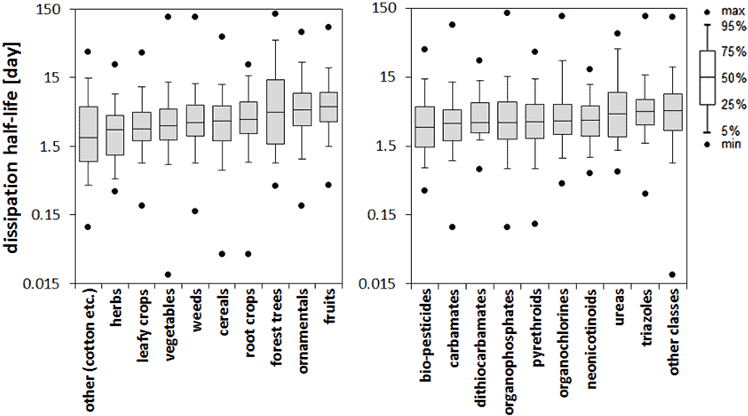 Upon measuring 346 different pesticides on 183 different plants, it was found that on average, 95% of them were between 0.6 and 29 days. As you see from the chart, most fall on the low end of that range. (16)

In short, not all but most pesticides dissipate quickly. While it’s true that some pesticides are pro-oxidants, the bigger concern people should be having is how they cook their food, regardless of whether it’s organic or conventional.

Many cooking methods create high amounts of oxidants, including those which are Group 1 Carcinogens, according the World Health Organization.

Examples of foods high in pro-oxidants include grilled chicken due to heterocyclic amines (HCAs), smoked fish and anything barbecued with charcoal, propane, or gas due to polycyclic aromatic hydrocarbons (PAHs), fried potatoes due to acrylamide, and most high-glycemic foods.

Regardless of whether it’s raw or cooked, any food that that really spikes your blood sugar will create high amounts of oxidative stress. Both type 1 and type 2 diabetics have it worse, as even more glycation (oxidation of sugar) occurs in their bodies. That’s what HbA1c measures. (17)

Sugars aside, most of the pro-oxidants we eat are a result of our cooking habits.

One of the reasons why meat causes cancer may be because it’s more prone to be charred, grilled, and smoked.

However due to the fact that it contains creatine, meat is the sole offender of providing carcinogenic HCAs in the human diet. They can only form when creatine molecules are cooked. Since creatine is not present in plants, not even burnt vegetables will contain them.

Is seitan healthy? That one, along with other vegan meats, are usually far from being healthy. They typically contain high amounts of added sodium and other dubious processed ingredients. Yet still, they’re probably better for you than the real thing, being that they won’t contain oxidizing and carcinogenic HCAs.

Both vegans and meat-eaters alike are guilty of eating too many oxidized fats.

While you can’t stop the oxidation of fats that takes place in your body after digestion, you can reduce how oxidized foods are before going in. Olive, coconut oils, and all other fats undergo oxidation from exposure to heat, air, and light. Unfortunately, the fats we eat are often exposed to all three of those.

We fry our oils, we roast our fatty nuts, and unlike during the hunter-gatherer days, many foods will sit on the store shelf or in your pantry for months or even years before being eaten.

Even if they’re raw foods, during that time there’s still the light and air exposure. The latter problem is often amplified, since processed food companies will fill their bags with excess air, to make them appear bigger.

This diagram sums up all of the sources, both the internal and external… 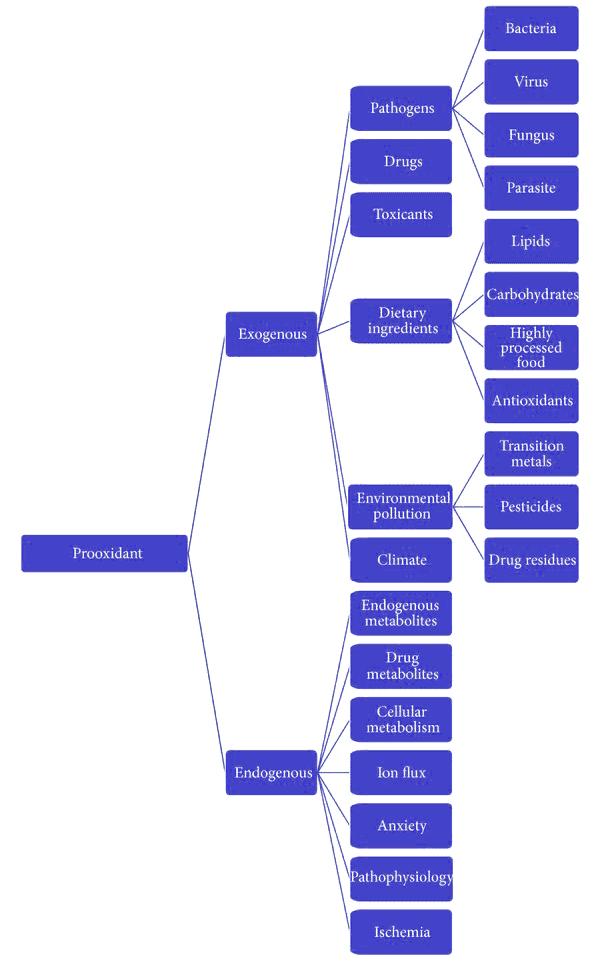 These mechanisms are opposite, but they can be two sides of the same coin.

The difference between antioxidants and pro-oxidants can depend on conditions. There are some antioxidants, like vitamin C, which can act as a pro-oxidant in the right environment. 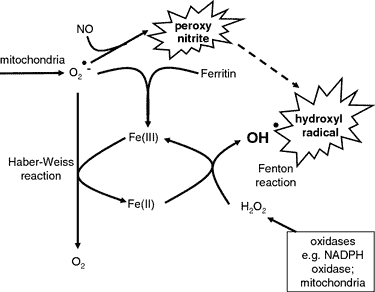 The Fenton reaction can be hard to comprehend. Just know that it creates free radicals.

This is because vitamin C also has the ability to reduce metal ions through a process known as the Fenton reaction. It is believed that the Fenton reaction may be a mechanism that worsens Alzheimer’s, Parkinson’s, and a number of other neurodegenerative diseases. (18)

Are polyphenols antioxidants or pro-oxidants?

With the exception of the vitamin C (ascorbic acid) and vitamin E, other antioxidants in plants don’t appear to act as pro-oxidants.

Vitamin E, which is actually a broad category of various tocopherols and tocotrienols, can be a pro-oxidant in high doses. That’s with amounts typically found in supplements, not foods. (19) (20)

There are tens of thousands of different types of polyphenols, so our understanding of each is limited and therefore, it’s possible and even likely that there are many others which can have a strong pro-oxidant effect that have yet to be identified.

That being said, whether it’s the common flavonol kaempferol, or the rare stilbenoid resveratrol, this negative effect is not being observed in research.

While they are antioxidants, vitamins C and E are essential in the human diet for entirely different reasons. We need vitamin C to prevent scurvy. Vitamin E deficiency leads to nerve problems and other health issues.

Taking high amounts of C and E may outweigh the good.

How much vitamin C is too much? No one knows. There is research to suggest that mega-doses of vitamin C may offer immune system benefits over short periods of time. (22)

As far as long-term use of high amounts, given the pro-oxidant effect of C on metal ions, drinking 1,000 mg fizzy packets and eating high dosage chewies on a daily basis should probably be avoided.

With vitamin E, many studies have actually found an inverse relation to health when it comes to the high amounts found in supplements.

UC Berkeley’s Wellness blog gives a rundown of the pros and cons seen in numerous studies and concludes “the evidence is growing stronger that vitamin E supplements might actually be harmful in some circumstances.” (23)

The amounts of vitamin E found in food and even multivitamins seem to be within the range of being more beneficial than not, however the concentrated supplements of it should probably be avoided.

While vitamins C and E can have both prooxidant and antioxidant effects, a more common scenario are the foods which contain antioxidants and pro-oxidants which are separate from one another.

A good example is coffee.

Depending on the roast, 3.5 ounces of brewed Arabica will have ORAC values – which is a measure of antioxidant activity – ranging from 2,450 for the light, to 2,780 for a medium roast. Those numbers are comparable to Fuji apples with skin.

Since people don’t eat enough fruits and vegetables, coffee is actually the number one source of antioxidants in the average American’s diet. (24)

The flip side is that there’s also acrylamide in coffee. Acrylamide is pro-oxidant to such a degree that the World Health Organization classifies it as a Group 2B carcinogen. That means it’s “possibly carcinogenic to humans.”

Fortunately for the coffee drinkers, the research suggests that despite the bad aspect of acrylamide, overall it’s good for your health because of the high amounts of antioxidants.

With chicken, the picture isn’t so rosy.

Fried chicken has an ORAC value of just 50. That means on an equal-weight basis, brewed coffee has around 50 times more antioxidants than fried chicken.

At 440 to 650, the ORAC values for grilled chicken are better, but they are still about 75% lower than coffee.

They’re a low source of antioxidants and with 14,000 ng of HCAs per 100g serving, chicken is chock full of potential carcinogens. Even a well-done grilled beef hamburger patty is over 99% lower, at 130 ng.  (25)

Sure, it has great protein content, but it’s hard to argue that the overall health of meats like chicken outweigh their pro-oxidant effect.

While no food is perfect, you can reduce oxidation in the human body by choosing foods whose good outweigh their bad. Contrary to the public’s perception of “healthy” grilled chicken breasts, they definitely don’t qualify as superfood.

Contrary to what some bloggers may claim, there is not proof or even strong evidence that too much antioxidants cause cancer.

It is true that there is preliminary evidence that N-acetyl cysteine (NAC) and vitamin E may worsen the disease, yet those are a couple types out of thousands of different antioxidants. Some cancer medications, like methotrexate, work through pro-oxidant attacks on tumors. Therefore in theory, antioxidants may adversely interfere with some cancer treatments. (28)

On the flip side, with other types of treatment like radiation, they may help reduce the damage done to healthy cells. (29)

When it comes to healthy individuals without cancer, there is countless research which suggests that antioxidants may reduce the risk of getting the disease in the first place. (30)

The harmful effects of antioxidants on the human body are limited. Even with vitamins C and E that can sometimes have an oxidant effect, their good qualities – the neutralizing of free radicals – outweigh the bad when consuming reasonable amounts.

It’s the high amounts of C and E in certain supplements that may have side effects, yet even the risk of their ability to increase oxidation remains theoretical. It’s been observed in lab research. Though to be safe, it may be best to stick with other antioxidant supplements that don’t exhibit a likely pro-oxidant potential.