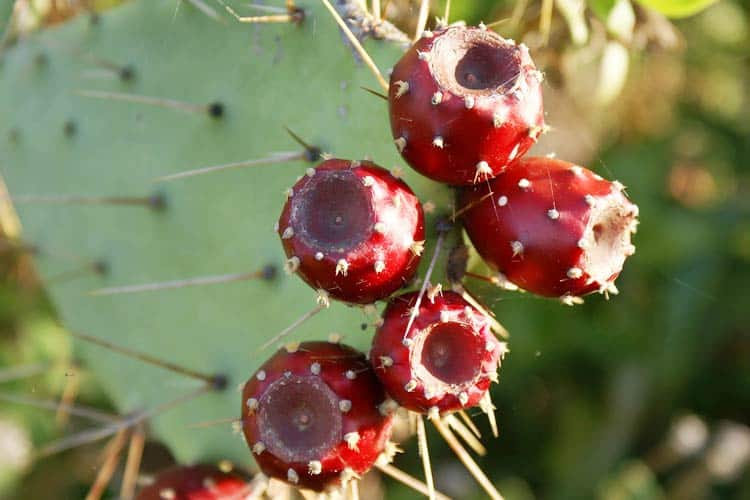 An even more popular cacti fruit is pitaya. Also known as dragon fruit. It’s being hailed as a superfood on par with acai.

As such, pitaya bowls have dethroned acai bowls in popularity. At least at some places we’ve seen here in SoCal.

Sure, both produce very vibrant colors. Acai is deep purple, while pitaya is an intense pink.

Does that mean they both contain intense concentrations of antioxidants?

Before you assume that freeze-dried nopal cactus prickly pear is another superfood, you need to look at the facts.

What is prickly pear fruit?

Prickly pears refer to the several dozen species of cacti in the Opuntia genus. Once fertilized their flowers produce a fruit (usually red) which are also known as prickly pears.

Contrary to their name, they are unrelated to pears (Pyrus genus). They are called prickly pears only because they are similar in size and shape to real pears. Other names include nopal cactus and tuna.

Prickly pears are not poisonous. Humans can eat them. They are edible and taste slightly sweet, similar to a cantaloupe. Since their flesh is juicy, they can also be pressed to make prickly pear juices and drinks.

And no, Cactus Cooler – a vintage soda sold in California and the northwest – does NOT contain any of this fruit. Nor any other part of the cacti. 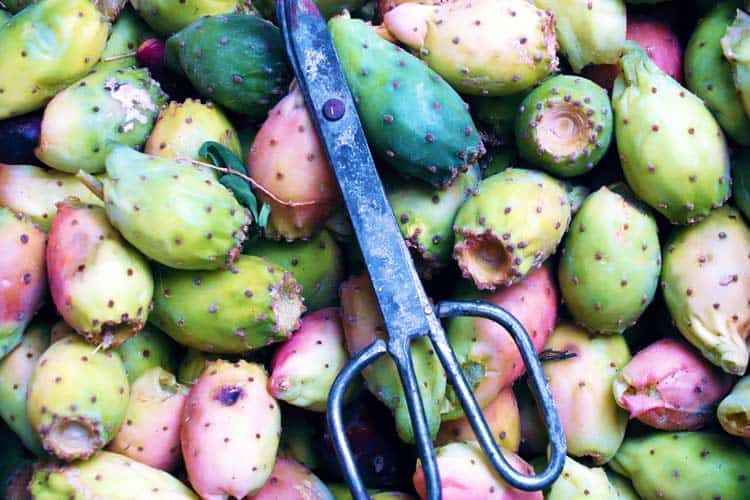 While red fruits are most common, they can also be yellow, orange, and green depending on the plant.

The many species of the Opuntia genus are native throughout Central America, particularly Mexico, as well as the United States. They are a common source of food in Mexican cuisine.

As a food, juice, and nutritional supplement, the red fruits are the most popular. As such, we will focus on that color.

The only benefits of prickly pear red fruit which have been clinically studied are the lowering of blood sugar and reducing oxidative stress in the body.

The first peer-reviewed study was quite small. It was published in 2012, in the International Journal of Sports Nutrition and Exercise Metabolism. (1) 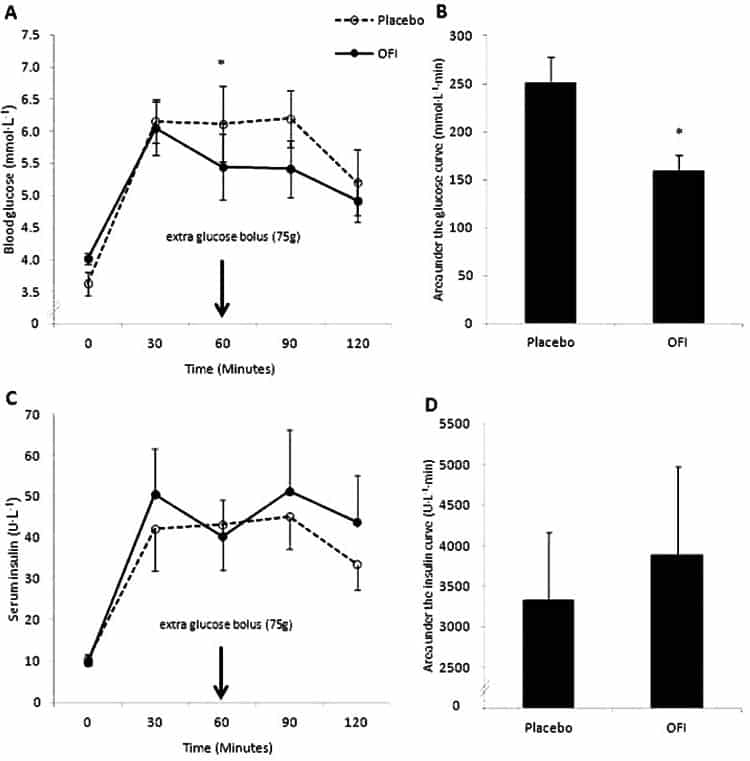 “In conclusion, the current study shows that OFI [prickly pear] extract can increase plasma insulin and thereby facilitate the clearance of an oral glucose load from the circulation at rest and after endurance exercise in healthy men.”

The 2nd trial was even earlier, in 2004. It looked at the antioxidants of red prickly pear. The species used was Opuntia ficus-indica. It compared the antioxidant activity of the fruit compared to taking vitamin C alone. It was published in The American Journal of Clinical Nutrition. (2)

This table shows the Trolox-equivalent antioxidant activity (TEAC) and concentrations of some antioxidants, like vitamins A, C, and E, in the blood plasma of the participants before and after using the supplements.

This next table shows measures of oxidative stress in their bodies before and after taking the prickly pear fruit.

Admittedly, this is quite confusing to the average person.

In a nutshell, prickly pear decreased many signs of oxidative stress. Some even better than the vitamin C supplement group.

Specifically, the MDA test, which was about 4-fold lower than baseline.

The MDA in the vitamin C group was actually higher than baseline. That might be because vitamin C acts as both an antioxidant and pro-oxidant. It’s why taking high amounts of vitamin C is not something we recommend.

Most noteworthy are the GSH:GSSG test results.

GSH:GSSG suggests how much glutathione activity you have. Glutathione is one of, if not the most powerful, natural antioxidant your body produces. It’s exponentially more powerful than any dietary source you can eat or supplement with.

As you see above, the baseline for this test was 10.5. The vitamin C group was the same. However the cactus pear group was 50% higher, meaning these burgundy, crimson, and ruby colored fruits seemed to spur the body’s natural production of glutathione.

By the way you can’t supplement glutathione directly, so that’s the next best thing.

In addition to this study, it should be noted that ORAC values testing for red prickly pear fruit juice has been reported as 17 to 25 µmol TE/ml. While that’s over 2x higher than red and white grape, it’s a far cry from a superfood like acai powder, amla, or our favorite vegan astaxanthin. (3)

Given how little research there is on this desert fruit, it is underrepresented in the medical literature of functional foods. That’s too bad because it means the the health-promoting benefits of prickly pear remain largely unknown.

Unlike most common fruits and vegetables, the antioxidants in white, green, red, and yellow cactus pear do not come from polyphenols. Rather, it appears to be from the betanin and indicaxanthin, which are the pigments of the fruit and found in the skin. 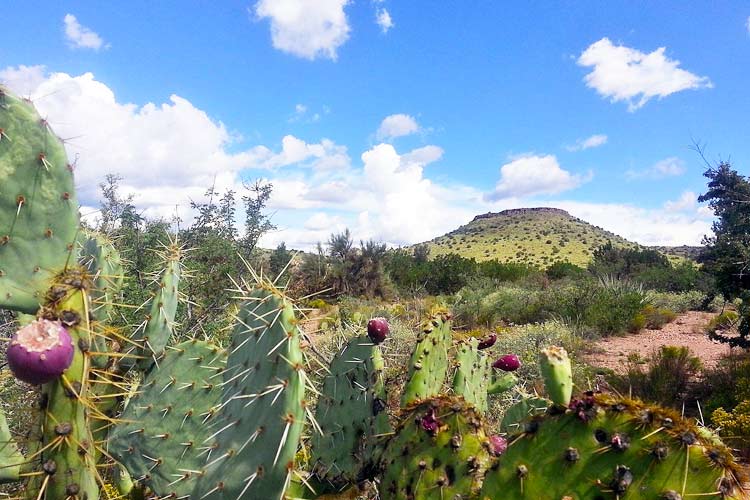 Given they must survive and thrive in the extreme desert conditions of heat, drought, and brutal UV bombardment, it’s not surprising that these pears have a skin which is loaded with antioxidants.

Most likely though, its biggest benefit is not the antioxidants it contains, but rather the antioxidant activity it spurs inside the body – i.e. promoting glutathione activity.

Does prickly pear lower blood sugar? Probably, however there is not enough research to know what effect, if any, it has on fasting blood glucose and postpandial (after a meal).

In short, there are promising signs of major benefits for this superfood, but many of the claims being made about it are somewhat a hoax. You can’t claim prickly pears lower cholesterol, fight cancer, aids in digestion, or promotes hearth health. Those have not been studied!

Of course, antioxidants in general do reduce inflammation and as such, a number of theoretical possibilities can be extrapolated from that. But for now, such perks should not be claimed in the marketing of red prickly pear juice, powders, and capsule supplements.

Obtaining the fresh fruit locally is preferred. Though most of us don’t have that luxury and even if we are in region where they grow, their flowering season which leads to fruit is a short period of time.

On Amazon you can buy organic red nopal cactus juice from Maxx Herb. You can also buy the fruit powder.

Whether you buy these or another brand, make sure it’s made from the fruit. Freeze-dried powders and juices made from the leaves of the cacti will not contain the same phytonutrients.