In the United States, it's difficult to buy fresh mulberries, but the dried versions have become a popular superfood. The resveratrol content of the mulberry is quite high. A study published in 2015 found it to have 50.61 (microgram-1 dry weight) (1). Of course that number means nothing without perspective. Grapes, particularly the darker varieties, are known to be an excellent source of resveratrol. The amount in black grape skins is 7.8 (microgram-1 dry weight). The amount of resveratrol in mulberries is over 7 times that amount.Although impressive, what may be the highest source are peanuts, which measure out at a whopping 270.54 (microgram-1 dry weight). Peanuts are about half the resveratrol as red wine, when you compare them ounce for ounce. This is quite surprising when you consider that 2.4 lbs of grapes are used to make a single bottle of wine, or in other words, you are comparing extremely concentrated grapes against plain unprocessed peanuts.The total antioxidant content in mulberries is quite high. An ORAC value of 2,036 is often mentioned online, though the websites who mention it do not disclose (or apparently even know) where that number is coming from. When it comes to ORAC values, we have found that very few people thoroughly research them and instead, simply cite a number from wherever they first see it. Unfortunately this leads to a cascading effect, where a false value is repeated multiple times and over the years, it becomes the only number you find during research.The only ORAC value for mulberries which we have conclusively verified and seen first hand is found in the book Issues in new crops and new uses, authored by Jules Janick and Anna Whipkey (eds.), published in 2007 by ASHS Press, Alexandria, VA (2). On page 287, they present the following chart which lists the mulberry ORAC value as 6,130. 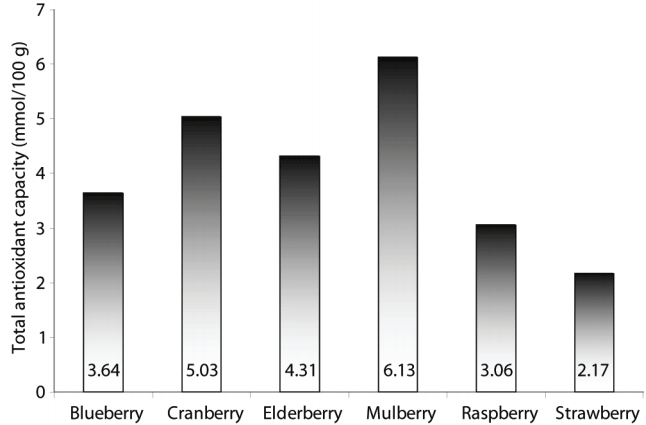 These tests were based on fresh fruits. It was not specified whether black or white mulberries were used for the test, but one would presume white, since those are by far the most common variety and it appears this test was looking at common berries. You don't see mulberries vs. blackberries, but just about all other common American berries are included. Blueberries, raspberries, strawberries, elderberries, and cranberries are beaten by a landslide.Obviously, this is not an ideal comparison since you are most likely to encounter organic dried mulberries in the United States. It's unknown how the drying, air, and light exposure affects their antioxidant content. Though given that dried mulberries are more concentrated than fresh mulberries (since the water has been removed) it is possible that the dried versions may actually have an even higher value.