A sister to broccoli, cauliflower, and kale, the maca root is part of the cruciferous family. Despite having been a popular superfood for nearly a decade, as of 2016 its antioxidant content information was still not readily available.We could not locate a single maca supplement manufacturer who could provide ORAC data, neither for their specific product or the actual plant, Lepidium meyenii. Furthermore, the nutritional information and health benefits provided were often vague. Therefore we analyzed nearly two decades of research specifically for this plant, ranging from hundreds of academic papers, to even patent applications for supplements containing this ingredient (which ironically, would reference this and other "high ORAC" ingredients, without providing or apparently even knowing the actual ORAC values).In Food Chemistry (Volume 79, Issue 2, Volume 79, Issue 2, November 2002, pages 207-213) is a study titled "Antioxidant activity of the cruciferous vegetable Maca (Lepidium meyenii)." It appeared promising, but the measurement methodologies used were far less sophisticated than the ORAC scale is at measuring antioxidant bio-activity.Finally in the 2013 edition of the International Food Research Journal we found what we were looking for: "Maca flour: a powerful ingredient for functionally enhanced bread" which provided test results from an extensive study conducted in Italy which looked at the antioxidant activity of maca flour (powder) compared to wheat, for the purpose of enhancing nutrition in bread. 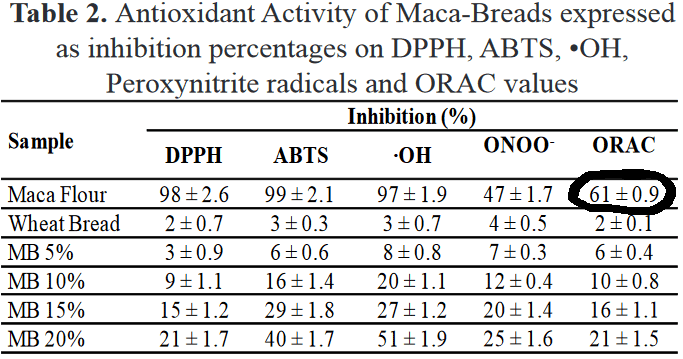 What the study references as flour is typically called raw maca powder by consumers and supplement retailers. The number in the above chart is u mol TE/gram. When converted to 100 grams, we have our answer: 6,100. How does this compare to other nutritional and healthy superfoods? It's about the same value as raw plums, which is respectable, but not what we would deem exceptional. Many berries are comparable or higher than maca. Another root vegetable, ginger, has a value over twice that of maca root.Many, if not most, online articles and marketing materials about maca use generic terms in describing its nutritional content. For example, we see statements like "rich in vitamin B, vitamin C, and vitamin E" and "excellent source of calcium, magnesium, zinc, iron, phosphorous, and amino acids." These statements are inaccurate at best and misleading at worst.

For example, 100 grams of maca contains 14.3 grams of protein (amino acids). That may sound high, but if you look at the powder's nutritional label you will see a serving size is typically 1 teaspoon, which is 5 grams. That means a single serving of maca contains less than 1 gram of protein based on the nutritional facts. The same logic applies to its vitamin and mineral content data - i.e. 100 grams of raw powder yields 285 mg of vitamin C (475% of DV) but one serving yields about 24% of your DV (and depending on processing method, it may yield zero). For these reasons, buying maca root powder or capsules for the antioxidant content alone would be an extremely expensive endeavor. Instead, other maca health benefits would be the only logical reason for taking them.