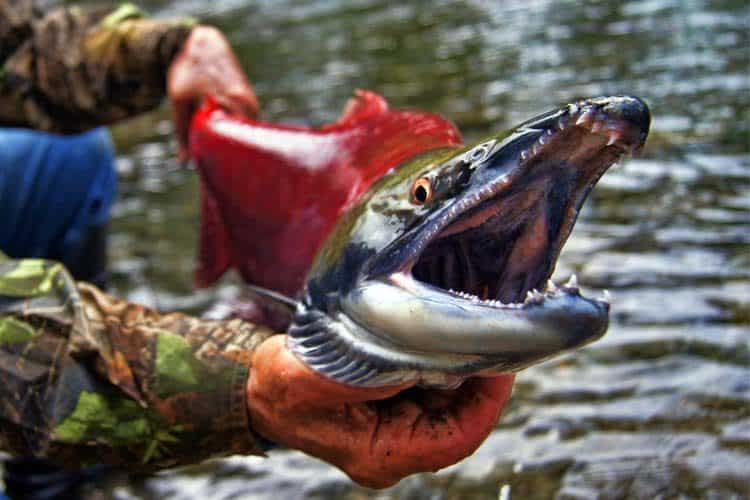 Every day you are bombarded with media and marketing for “must have” superfoods and supplements. But more times than not, sound scientific studies backing them are weak, or worse yet, non-existent!

That’s why for us at Superfoodly, it takes a large body of proof (or something close to it) for us to go out of our way to add a new food or nutrient to our daily regimen. We’re not going to jump through hoops and spend money for snake oil.

There’s only a small handful – less than 10 supplements total – which we believe are worth taking on a daily or semi-regular basis. Even then, not all of them are for everyone. For example, no point in taking glucosamine if you don’t have joint problems! 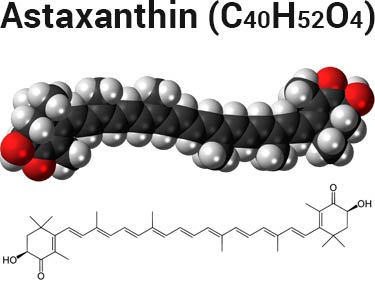 One of those nutrients which research overwhelmingly suggests as being worthwhile is astaxanthin. It trumps many antioxidants by leaps and bounds.

It’s hard to ignore its ROS-scavenging capacity (1). In vitro it’s up to:

Many of the suggested health benefits of astaxanthin are related to your eyes (2). It can be found in higher concentrations within your retina when consumed from dietary sources, such as foods high in astaxanthin as well as supplements. Along with the similar fat-soluble carotenoids lutein and zeaxanthin, research has suggested astaxanthin may help in absorbing some of the blue light and near-UV rays which our retinas are exposed to on a daily basis (3).

You can wear sunglasses outside, but what about indoors? LCD and LED screens such as computer monitors, cell phones, tablets, and TVs are some of the largest sources of blue-light (4). This is a newer phenomenon, since the old fashioned Cathode Ray Tube (CRT) TV screens didn’t have that problem. But of course during the past 15 to 20 years, only LCD and LED screens have been sold.

How many hours per day are we staring at these sc

Our total exposure is only magnified by the fact that LED energy-saving lightbulbs are now the go-to choice in both residential and commercial applications.

As you probably are aware, vision benefits are only the tip of the iceberg in what research has hinted at. Aside from cataracts and macular degeneration, there are studies suggesting that astaxanthin benefits might include cardiovascular health (5), brain aging (6), cancer (7) (8), diabetes (9), as well as other diseases and conditions.

To be clear, no health benefits being studied have been proven. However most would say this preliminary research is very promising so far.

As with any nutrient or supplement, when possible, we believe the ideal way to obtain it is through your diet. Where can you get astaxanthin from natural sources? Which foods contain high amounts of it?

How much astaxanthin is in salmon?

Here’s a look at the levels in several species of salmon, as well as closely related salmonoids (10).

As you see your best source – a wild sockeye salmon – will yield around 3 mg. That’s great but keep in mind that much of the research and clinical studies looked at up to 8 to 12 mg (or more) per day in humans. Or when the studies involved animals, the ratio of astaxanthin to body weight often converts to around that same amount.

Is it safe to eat salmon everyday? 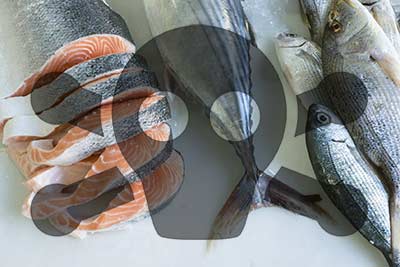 Eating 4 servings of sockeye salmon – or 12 ounces per day – in order to get 12 mg may be bad for your health. This is because of the unfortunate heavy metal contamination dangers, such as possible mercury poisoning.

This is true even with organic wild caught salmon. The reason why almost all fish can be problematic with mercury is because you are not just eating that particular single fish, but essentially all of the smaller fish it ate during its lifetime.

Why? Because once mercury is in a body, it tends to stay in a body. Whether it’s a human, fish, or some other animal, the mercury will bind to sulfur-containing molecules in a body, and those are found in the mitochondria and nearly every enzyme (11).

This is why even if you’re eating an organic wild caught salmon, no one has any control over the foods it ate while alive and how much mercury it may have contained.

It’s the reason that some people who eat only salmon (and not other types of fish) still may have high mercury levels (12). Whether it’s farm raised, wild caught, or canned, pregnant women are advised to not eat more than 6 ounces of salmon per week.

Fish aside, what is the astaxanthin content in other foods? Marine life – or land animals which eat it – are about the only places you are going to find it. There is one land-based plant which produces it in relatively high amounts and that is phaffia yeast (13). However it’s not common in nature. 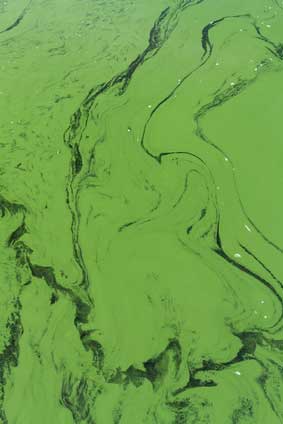 Animals do not produce astaxanthin, they get it from plants they eat. Those plants happen to be microalgae, which grow in the salt water oceans as well as fresh bodies of water. So technically, there are only vegan and vegetarian sources of astaxanthin, at least if you’re getting it straight from the original source which made it. The same holds true for the essential fatty acid, omega 3 (14). Salmon are getting omega 3’s from what they eat, it’s not something they synthesize themselves.

Even if a certain type of marine life doesn’t directly eat plants, it may be eating other animals which do lower down on the food chain. For example, animal A may not directly eat astaxanthin, but it eats animal B which does directly eat it. As a result, A gets it from eating B.

This is why seafood is the most common source of astaxanthin in food. It’s not that we as humans can’t eat microalgae directly, but rather we choose not to. Unfortunately that is the only vegan source.

To put those numbers in perspective, the salmonoid category (such as foods 1-10) average out at about 5 ppm.

That explains how much astaxanthin is in krill oil. It’s a rich source because the whole krill (before refining and extracting the oil) has around 24x more astaxanthin content than salmon and similar species of fish.

Obviously, not all of those are feasible for the human diet. We’re willing to wager that you don’t want to scarf down a bowl of krill and almond milk for your breakfast tomorrow. Nor do you care to slurp up the Pacific ocean for some of that green algae! 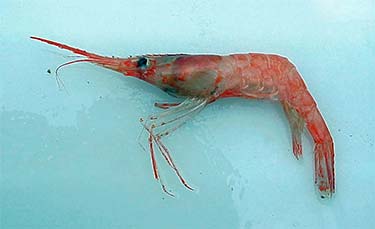 What percentage of seafood sold in the world is shrimp? The entire category only represents 4.6% of seafood by weight (16). Isolating that figure further, the cold water species of shrimp (which includes arctic) is only about 6% of the total world supply of shrimp sold per year (17).

That means only 0.276% of seafood sold includes arctic shrimp (but not just the P. borealis, as other cold-water species too).

The warm-watered species are what we commonly eat and those have most of their pigment in the tails. Even if you ate those, much of it leaches out from boiling.

The more red, the better

If you’ve ever broken open one of the capsules for this particular antioxidant supplement, you will realize how intensely red of a pigment it is. Astaxanthin food coloring is actually used for some applications because of that – to make seafood appear more red. Unfortunately though, it’s almost always the synthetic kind, which doesn’t have the same antioxidant properties.

Given its bright red color – usually but not always – the best natural astaxanthin food sources are those which have the most intense color. There are not precise and vetted studies on the exact amounts in the following foods (numbers 16 through 20) and that is because they contain less (often exponentially lower amounts) than the salmonoids. Plus, most of it is in their shells or scales which are not edible. As a result, you don’t really see in-depth studies being done on these to measure how much they have in their edible parts. 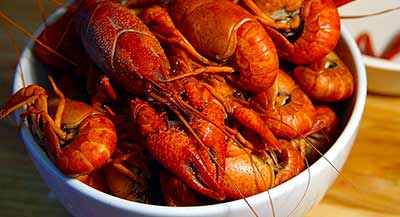 Just a couple centuries ago, we would be able to eat salmon, shrimp, lobster, and other fish containing astaxanthin on a daily basis without any health worries. Today that is not possible and as detailed above, the problem is so bad that even organic and wild caught is likely not safe to eat on a daily basis.

And not all astaxanthin is equal.

Synthetic astaxanthin has 90x less antioxidant activity than the natural form (18). This is because what’s found in algae (the original source for fish) are the ester forms; diester and monoester. The synthetic kind is just “free” astaxanthin which doesn’t operate in the same biological manner (even though it has the same bright red color).

Whether it’s organic wild caught or farm raised, don’t assume your salmon will be naturally red. Alaskan wild salmon are naturally grey, since there are no red crustaceans in their diet (19). If you see it in the supermarket as red, it’s because added coloring. Farm-raised fish are fed pellets containing the synthetic version, in order to give their flesh that red appearance when it reaches your kitchen table.

That’s why even your bright red salmon you buy may not be packing the antioxidant content you think it is.

In short, even when you think you’re getting a natural dietary source of it, you might not be.

This is why in addition to your food sources, using a supplement the rest of the time or to augment is a good idea.

The legit and trusted astaxanthin supplement brands all derive it naturally from H. pluvialis, the same green algae that fish and seafood get it from. By going direct to the source not only are you able to get exponentially higher amounts, but also avoid those dangers of mercury and heavy metals.

Pictured here are the actual bottles that two of us here at Superfoodly currently use. Why x3 of the EyeAstin? Because that version only comes in a quantity of 60. Since we take 1 at each meal, multiple bottles are used each month.

On Amazon you can get Nutrex Hawaii EyeAstin in a 60 count.

If you are vegetarian or simply don’t want capsules made out of gelatin, the Doctor’s Best brand on the right uses a plant-based (vegan) capsule. However a brand we like even more for the pure form is Sports Research, who uses AstaReal (the best natural source) in a higher dose than EyeAstin (Sports Research is 12 mg). They combine it with non-GMO coconut oil to boost absorption. Veggie softgels, too.

Since EyeAstin contains multiple ingredients that sometimes overlap with other supplements, a number of us have now switched. Here is the Sports Research product we use.

Whether it’s these or other brands, please understand that it’s a fat-soluble substance. So do not take it with just a glass of water or your morning coffee. In order for your body to absorb it, it’s best to take with meals or snacks, preferably those which contain at least 10 to 15% fat content.