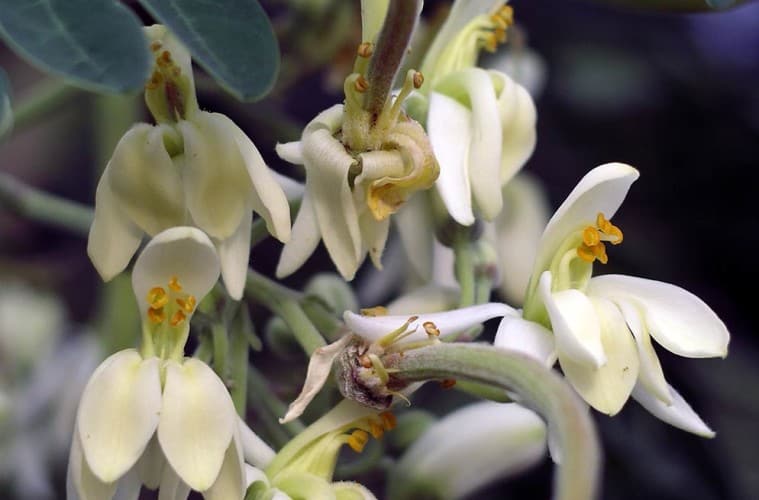 Also known as the drumstick tree, horseradish tree, and miracle tree, the moringa has been used for centuries in Ayurvedic medicine (which is an ancient Indian holistic approach).

Most parts of the moringa tree are edible and are used as a source of food in the places where it grows indigenously. The young fruit pods, shaped like drumsticks, have an asparagus-like taste and its seeds can be eaten like peanuts. Moringa leaves are used as a green vegetable and the roots, which have a sharp flavor, are used to make a condiment similar to horseradish

This species went largely unnoticed by the west until a recent series of studies that reported (or suggested the possibility of) favorable health benefits for this ancient medicinal plant. No doubt, the fact that Dr. Oz featured it on his show several years back help put it on people’s rader.

Not all of the following are proven but they are suggested as possibilities, according to the latest science.

Native to the Himalayan regions of northern India and parts of Africa, science is discovering that the plant is packed with essential nutrients and also provides a range of phytonutrients – plant compounds that, while not essential for life, are known for their powerful health-boosting properties. All in all, it contains more than 90 nutrients and phytonutrients, some of which are thought to be unique to moringa.

By weight, this herb provides 7x as much vitamin C as an orange and 4x as much vitamin A as a carrot – which translates to almost 3 times the RDI of vitamin A per serving of moringa. It contains more niacin than peanuts or brown rice, two plant sources with the highest levels of this B-complex vitamin. It also contains 4 times as much calcium as milk, 3 times as much potassium as a banana and triple the iron of spinach1.

The leaves contains 18 amino acids and is one of the rare plants that contain all eight essential amino acids, making it an excellent source of complete protein, with none of the saturated fats contained in animal products.

This of course makes moringa a good vegan source of the branched-chain amino acids (BCAA) leucine and isoleucine, commonly found in dairy foods. These amino acids promote lean muscle mass and boost your brain and body’s energy consumption, keeping you both energized and alert.

Tryptophan, a precursor to the calming neurotransmitter serotonin, is believed to possibly help reduce anxiety, insomnia, and improve immune function. It’s the same thing that’s in turkey and why everyone is sleepy after their Thanksgiving meal.

Tyrosine, a non-essential amino acid, is purported to help support memory and healthy function of the thyroid, adrenal and pituitary glands.

Zeatin, an antioxidant present in moringa at significantly higher levels than found in other plants, keeps cells healthy, wards off cell-aging damage from free radicals and prolongs the useful lifespan of cells. Zeatin also benefits the function of other antioxidants. Applied topically, some allege zeatin can help slow the premature aging of skin.

Chlorophyll is regarded as a blood purifier and alkalizer. Some believe it might promote detoxification and strengthen the immune system. Moringa is an excellent source of chlorophyll, containing four times as much as is found in wheatgrass.

Many of the antioxidants and other phytonutrients in moringa may offer anti-inflammatory effects.

Compounds with names such as caffeoylquinic acid, kaempherol and quercetin function as Cox-2 enzyme inhibitors in vitro (in the lab), by blocking production of pro-inflammatory chemical messengers, in a similar fashion to certain anti-inflammatory drugs. Carotenoids and flavonoids are known to help reduce inflammation and promote healthy joint function.

In addition to its anti-inflammatory arsenal, moringa contains a range of compounds that may help manage and reduce pain. Further research is needed to prove this though. A partial list of compounds theorized to be responsible for moringa’s pain-relieving effect include omega-3 fatty acids and its other anti-inflammatory compounds. Moringa also contains alpha, delta and gamma tocopherols, members of the vitamin E family that have been attributed as having pain-relieving functions.

In lab research, moringa seeds and leaves have been found to reduce the growth of food-borne pathogens such as E. coli, salmonella and staphylococcus, which may make concentrated extracts of the plant useful as a safe, natural food preservative.

Researchers are also looking into the possibility that the seeds may contain compounds that kill common water-contaminating bacteria and fungal pathogens. However claims that moringa extract might help to inhibit the herpes and Epstein-Barr viruses have no research to support them.

Bitter properties of the leaves are purported to provide liver cleansing in Ayurvedic practices. The seeds have been identified as a possible bio-absorbant for removing heavy metals. Neither are proven but research does suggest their possibility.

Its bark, leaf and root may help support healthy digestion. Moringine and moringinine, alkaloid compounds named for this plant, have been purported to help regulate blood sugar levels and those spikes that can lead to type 2 diabetes. As such, after further research, moringa may prove to be a powerful ally in the epidemic of diabetes and obesity.

Compounds in the seeds, bark, fruit, flowers, and leaves may help support the circulatory system.

A compound called niaziminin in the plant has been shown to have some anti-cancer properties in the lab. Cells of cervical, prostate, pancreatic, liver and colon cancers have been inhibited in preliminary animal or tissue culture studies. Though it’s important to stress that what happens in the lab rarely happens in living, breathing humans.

Additionally, compounds in the plant might turn out to be beneficial for regulating thyroid function, which affects women 5-8x more frequently than men. Moringa leaf extract has been found to increase thyroid hormone levels in female, but not male rats when administered in high doses, while low doses suppressed thyroid hormone levels4.

Remember all the research mentioned so far are only preliminary findings. It has not been proven for any disease. It should be used as a dietary supplement only.

The big lie (or at least exaggeration)

Obviously, many diet pill manufacturers are notorious for telling big lies (or at least exaggerating claims) regarding certain ingredients used in their products. Some have marketed pure moringa leaf pills or supplements as offering weight loss benefits. The problem? To the best of our knowledge, there is not reputable research out there which supports or suggests that claim.