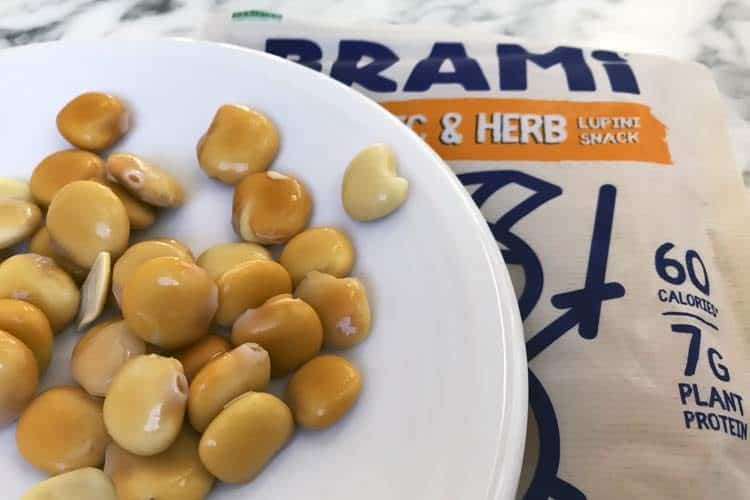 But probably not this one, unless you live in Europe or South America.

Compared to those other beans, it offers higher protein, lower carbs, and other health advantages.

But watch out for side effects, because lupini beans are poisonous if not prepared/sourced the right way.

What are lupini beans?

Also known as lupin and lupine, this yellow legume comes from the Mediterranean (Lupinus albus) and South America (Lupinus mutabilis). Both of these edible species produce a bean that’s about ½” in length, flat, and has a firm texture.

Lupini beans have been eaten by humans throughout history. 2,000 years ago during the era of Augustus, lupini were a common food throughout the Roman Empire and considered “a dish of the poor” due to their low price.

Royalty enjoyed them, too. Lupin were recovered from an Egyptian pharaoh’s tomb which dates back some 4,200 years.

The species found in the Andean mountains, known as tarwi in Spanish, was considered a staple food within the Incan Empire.

Today are they are still consumed in these regions and elsewhere. During the past few decades, there have been non-GMO variants called sweet lupins which have been bred. These contain far less of the bitter toxic alkaloids and can be safely eaten without soaking. 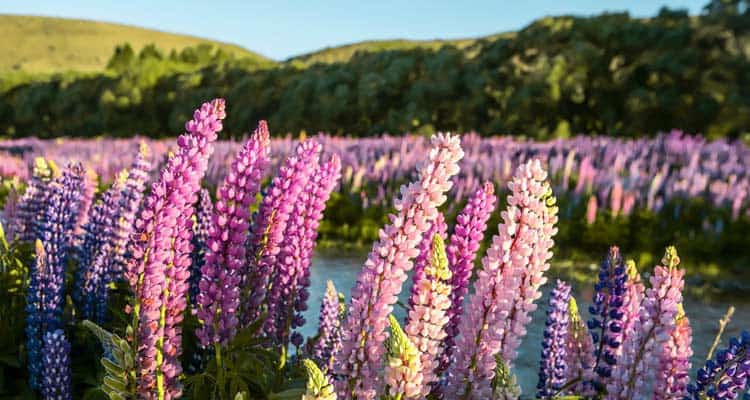 Unlike peanuts, which are a legume that grows underground, lupine grow above the ground. Before the seeds form, there are beautiful blue and pink flowers.

The fact that they grow above ground is safer because aflatoxins, which are produced by fungi, are a notorious problem for peanuts and potatoes.

Source: Gallus, or Roman Scenes of the Time of Augustus and Lupins: Geography, Classification, Genetic Resources and Breeding.

Lupini beans naturally have a very bitter flavor. To overcome this, they are soaked and rinsed several times to remove the alkaloids. This creates a moist inside, while the outer skin remains crisp. They taste salty from the brining process, with a natural subtle sweetness. As with soybeans, the taste of lupini is mostly neutral on its own. They work best for recipes where you want the flavors of other ingredients to shine. 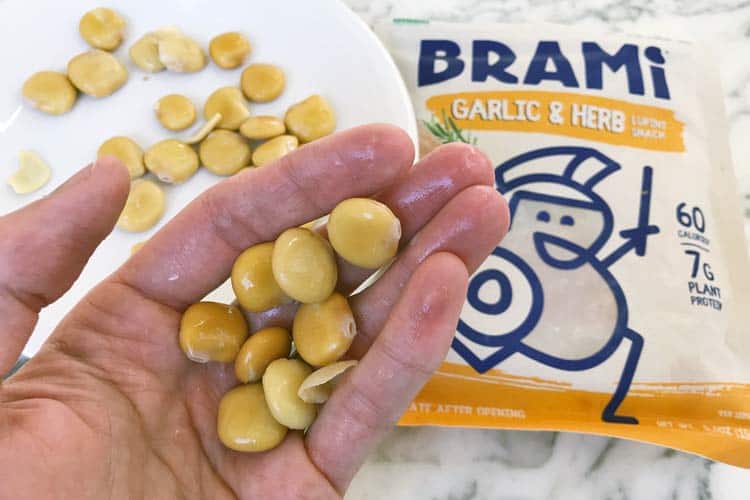 Unlike peanuts, almonds, and other nuts, you eat lupin slightly moist since they are pickled or brined. This is why the ready-to-eat versions are sold in jars and bags.

What are they good for?

Lupini beans are good for a stand-alone snack, or as part of a recipe where they are the main ingredient. This is because preparing lupini is a time-intensive process and their higher price reflects that. You want to use them in a way they’re noticed, not ignored.

In Italy, Spain and Portugal, they’re marinated with herbs and spices to serve for special occasions, like during Sunday dinner and Christmas. This is why they’re also known as Easter beans.

Brined lupini are used as an upscale bar food in the Mediterranean region, much like olives. In fact, you will often see them mixed with green or Kalamata olives in a small dish.

After the soaking process and drying, the beans are good for making lupin flour, which is a wheat alternative that works well for baking bread and making pasta. Several European brands use this flour in their GF noodles, though it’s diluted with cheaper filler ingredients, like corn and potato starch.

In place of chickpeas, lupin work great in a tossed salad. They serve as a similar filling ingredient, while offering an even higher protein boost.

How long lupin last after harvest and processing can be up to two years, if properly preserved and packaged.

These are a healthy snack for bodybuilders, athletes, and anyone else trying to eat more vegan protein.

How much protein lupini beans have is more than other legumes and even beef or steak. 40% of the calories in lupin are in the form of protein. A ¼ cup serving is 30 calories and has 3g of protein. That’s according to the USDA National Nutrient Database. (1)

As reminder, grams are different than calories. With amino acids, 1g = 4 calories.

Added olive oil and seasonings will lower the percentage of calories from protein, but if you buy lupini beans in a jar with only salt or preservatives added, the 40% concentration will hold true.

If you want some in a jar without oil that are ready to eat, try the brand Cento which is available on Amazon.

The Journal of Nutrition published a protein bioavailability study using whole sweet lupin (L. albus cv. Multolupa) and compared it to egg protein. Young adult males consumed each and absorption was evaluated using the nitrogen balance technique. They found that the human body utilized lupini protein at about 80% the rate of egg protein. (4)

Unlike many beans which have 10-20% of their calories in the form of fat, lupin have almost none. On nutrition facts label, the amount is so trivial it rounds down to 0g of fat per serving.

The only common legume with fewer carbs than lupine is the peanut. It is 11% carbs but significantly higher in calories, since 78% of them are in the form of fat. In comparison, peanuts are calorically-dense snack that’s not good for weight loss. (11)

Compare that to animal-based proteins and meats, which all contain zero fiber. 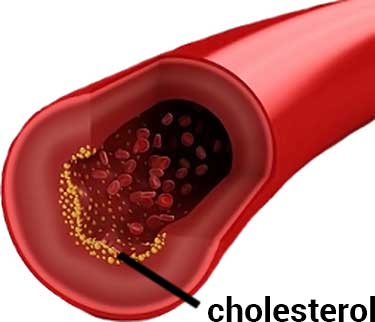 In a model of atherosclerosis, for 90 days rabbits were fed diets consisting of 1% cholesterol, 15% saturated fat, and 20% protein. For the protein component, some received casein, some received lupin protein powder, and others received a 50/50 mixture of both.

Even though all groups were consuming the same amount of cholesterol, the lupin protein isolate group had a 40.3% reduction, versus the 33.5% for the casein group. (12)

When chickens were fed lupini seeds versus grains, their bodies produced less cholesterol and liver fat. (13)

There has even been a randomized, controlled, and double-blinded trial involving 72 people with high cholesterol. Taking 25g daily of lupini bean protein had a lowering effect that the same dosage of milk protein did not. (16)

Plus, remember it’s a cholesterol-free food since it’s plant-based.

While legumes are normally not prized for having high antioxidant activity, it appears lupin flour and beans may be an outlier.

Researchers found a surprisingly high concentration of phytosterols in lupin flour that demonstrated significant radical scavenging activity in lab tests. They are ß-sitosterol, stigmasterol, and campesterol. (17)

Several studies have reported that lupini beans have a blood sugar lowering effect, even when pitted against other foods with a similar nutrition profile. This has been particularly evident with diabetes. (18) (19) (20) (21)

The reason is believed to be due to the lupini’s conglutin gamma protein, which appears to influence genes related to glucose metabolism. (22)

When used as a flour in pasta and bread, the higher fiber content may also slow the rate at which the carbohydrates get digested. 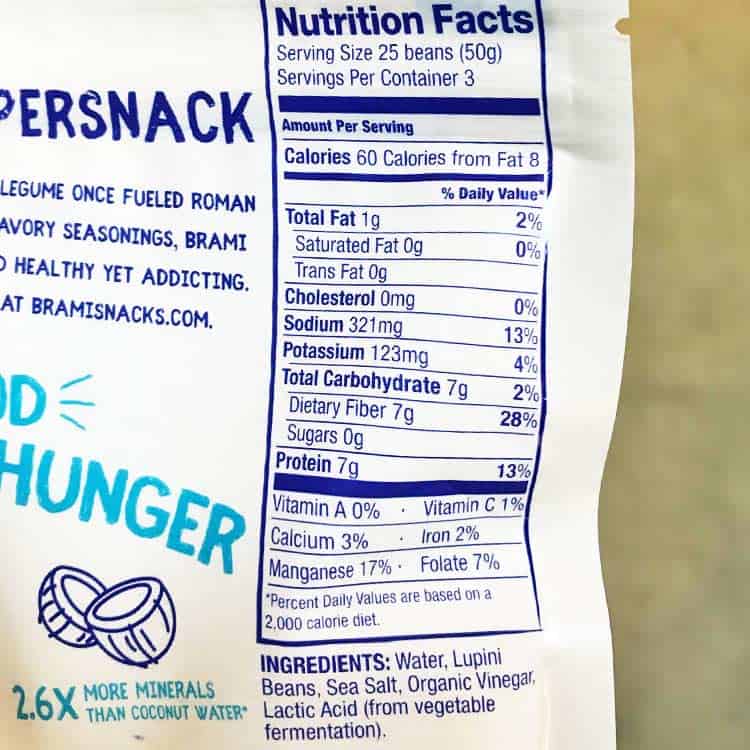 The nutrition facts for the average lupin snack without added oil will look like this. Salt doesn’t added calories, nor will small amounts of seasoning. Depending on plant species and cultivar, the nutritional values do vary a bit.

When it comes to this brand, Brami, theirs is actually higher protein than average for the bean. 7g per 60 calories = 47% protein! You can order them on Amazon.

Side effects of lupini beans

Due to their high amount of alkaloids and enzyme inhibitors, unprocessed raw lupins are poisonous to humans, dogs, cats, and livestock. That risk, along with allergic reactions, are the two most common adverse reactions from eating the beans.

There is an increased chance you are allergic to lupin if you have a peanut allergy. Both are legumes which have cross-reactivity as high as 44%, based on rates of skin prick testing. Soybean allergies also overlap to a lesser degree.

To prepare them safely and remove the alkaloids, they must be rinsed, soaked, and the process is repeated over a period that typically spans several days. Rinsing and soaking in brine is another common method for removing and neutralizing the bitter compounds.

Sweet lupini don’t need to undergo the same prep. Because they’re hard to differentiate visually, precautions must be taken to ensure they aren’t mixed up with the normal bitter varieties.

Making homaemade lupini beans from scratch can be safely done but given the risk, it’s not recommended for the novice. The safest way to eat them is to buy in jars, cans, or brine from trusted brands which have already addressed the alkaloid issue. (23) (24)

In Italy, Spain, United Kingdom, and many European countries, lupin can be found for sale at grocery stores. In the US and Canada, they remain hard-to-find, as many people have never even heard of them. 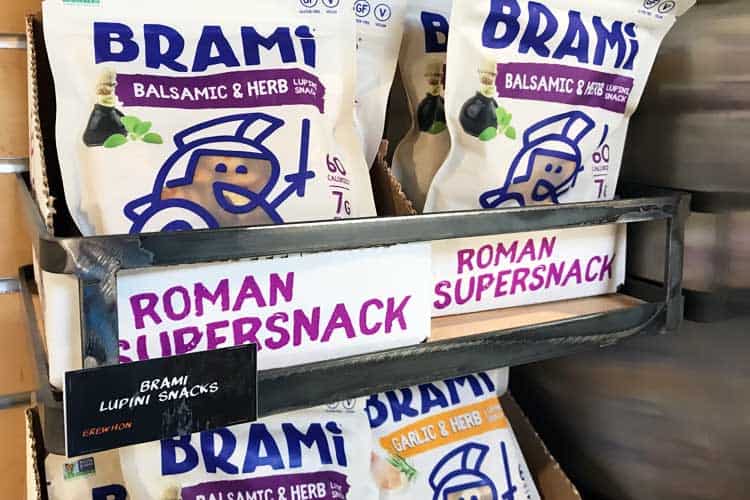 Walmart sells imported lupini beans in jars by the brands Castella and Cento, but only via their website. Sold as a snack food, the brand Brami, which are brined in small bags, can be purchased in-store at some locations of Whole Foods, Plum Market, and numerous independent grocers and health food stores.

On Amazon, you can buy them in sea salt, garlic and herb, balsamic herb, and chili lime. They are a delicious low calorie and high protein snack that works for almost any diet.

Can’t decide on a flavor? Try their variety pack.