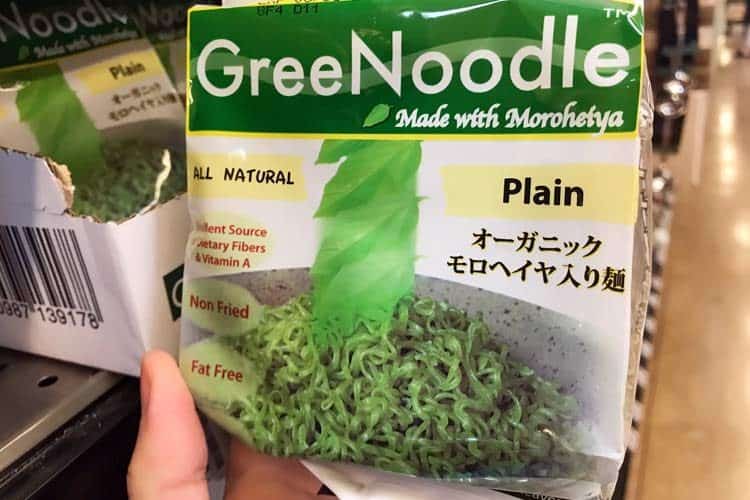 Unless you find a way to buy frozen molokhia online, which is another way to spell it, or you grow the seeds in your backyard, odds are that you will never come across this food. At least in the fresh form, at a normal grocery store.

However, you can find the dried leaves for sale, as well as nutritious foods which incorporate them.

What is Jew’s Mallow?

Native to Africa and Asia, Jew’s Mallow is a flowering plant which grows to a height of about 13 ft (4 m). The thick and sturdy stems are used for fiber (jute) to make textiles and rope. The green leaves, commonly called Egyptian spinach, are edible. 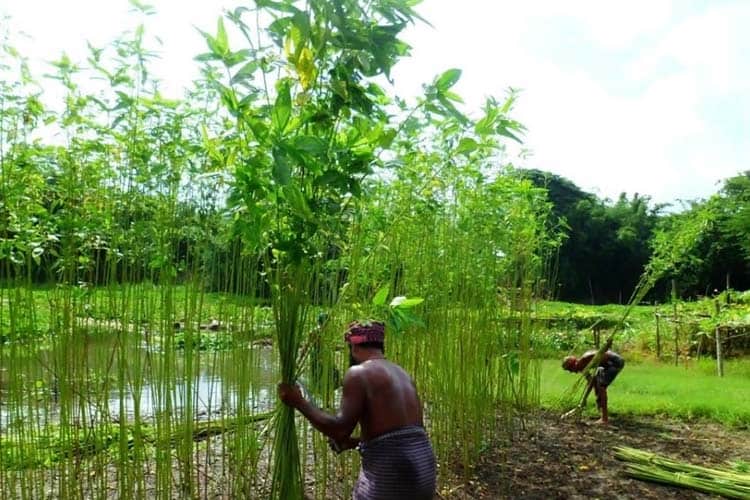 What the fully-grown plants look like. These men in Bangladesh are harvesting it for the jute (fiber). Photo by Baized Hossain [CC by SA 4.0]

There are over a dozen species of the plant. The one most commonly eaten is Corchorus olitorius, which is the scientific name for it.

The origin of Jew’s Mallow name comes from the fact that it served as a staple food during ancient times for the Jewish people. It’s believed to be the food referenced in Job 6:6-7. See Eat and be Satisfied: A Social History of Jewish Food.

The Egyptians have been eating it for thousands of years. Royalty, the pharaohs of ancient Egypt, were served a soup made from the leaves. It was believed to be a remedy for illness recovery. This is why their culture calls it “The King’s Vegetable.” For more history on it, check out Global Delicacies: Diversity, Exotic, Strange, Weird, Relativism.

Some believe Egypt is the geographical origin of the Corchorus olitorius plant. Others propose the greater Middle East, North Africa, the Indo-Burmese region, and/or India. Because its history of cultivation in these areas dates back hundreds to thousands of years, identifying where it first natively grew is impossible.

Moroheiya, which is sometimes spelled molokhia and mulukhiya, means mallow leaf in Arabic. Despite being a foreign word, moroheiya is commonly used in Western countries. Egyptian spinach is the most common English name for it.

The reason there are so many names is because each area calls it something different. (2) 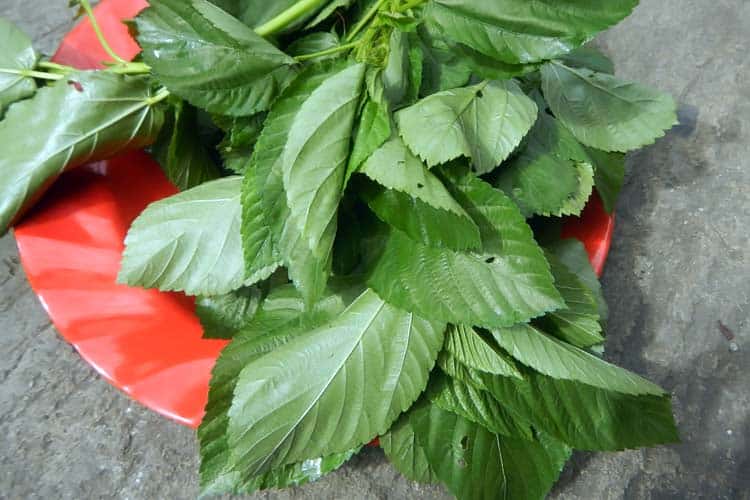 The bitter, mild flavor is similar to okra and the leaves of cruciferous vegetables, like kale and bok choy. Because of the bitter and earthy taste, along with a leafy texture, Jew’s Mallow is usually eaten cooked.

How do you make molokhia?

What’s unique about molokhia is that when you cook or pulverize it with water, it creates a gelatinous texture. That’s why it’s called bush okra, because of the comparable slimy consistency.

While the texture may not be appealing for a raw salad, molokhia leaves work wonderfully for soups, stews, and sauces that you want to thicken up. It can serve as a vegan low calorie alternative to dairy and eggs. 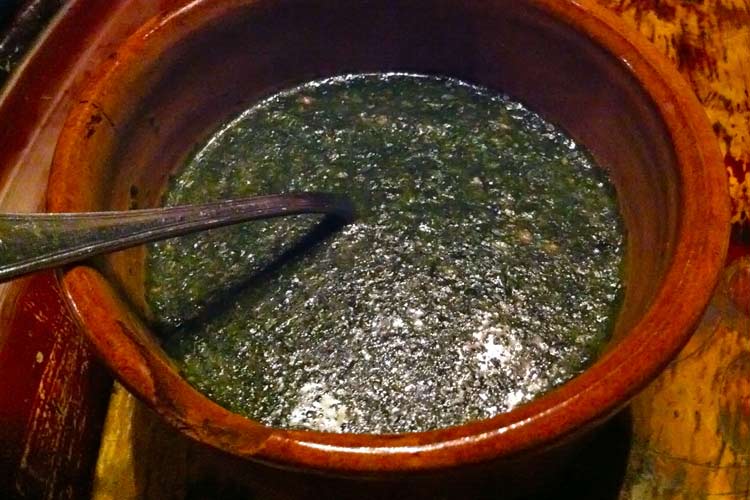 Authentic mulukhiyah, which is the English spelling often used in Egypt. Photo by Habib M’henni [CC by SA 3.0]

Egyptian, Syrian, Lebanese, and Tunisian molokhia recipes are all similar, as they involve making the leaves as a hot stew or into a green sauce that looks like pesto. The latter is typically served over chicken, rice, and rabbit. Egyptian flatbread, known as ‘eish baladi, uses the sauce and it’s practically considered a national dish.

Molokhia in Japanese cuisine didn’t become popular until the 1980’s. Today, ohitashi is a popular dish, which is the blanched green vegetable served with soy sauce. In Japan it’s commonly used in recipes for seafood, noodles, and stir-fry.

California-based Eon Foods makes GreeNoodle, which is a ramen-like pasta made with organic moroheiya leaf powder. This creates an extra gelatinous texture. In addition to Japanese and Asian supermarkets, you can buy GreeNoodle on Amazon.

The nutrition facts for Jew’s Mallow/moroheiya are listed under “jute potherb” in the USDA National Nutrient database.

One cup (28g) of raw moroheiya leaves are just 10 calories. When boiled and drained, one cup (87g) is still only 32 calories. It’s virtually fat-free and has almost no carbs.

Aside from water, most of the mass in Egyptian Spinach comes from insoluble fiber. The ratio is approximately 4:1 for insoluble vs. soluble fiber content. (3) (4) 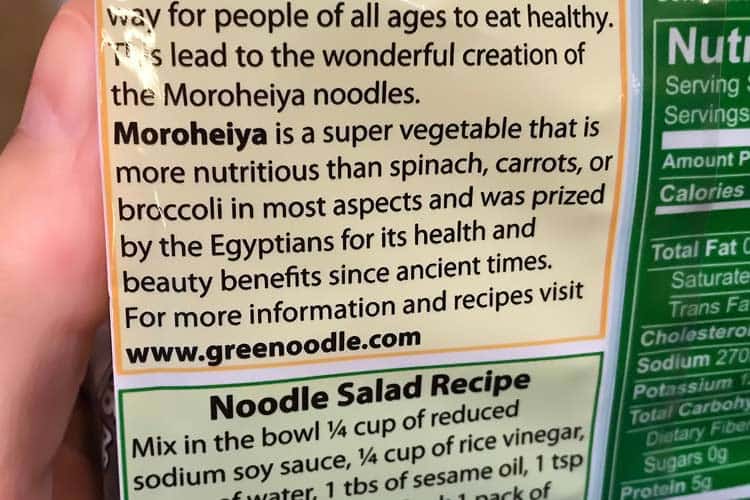 In the US and Canada, your best luck is searching for moroheiya leaves at a Middle Eastern or Asian grocer. Jew’s Mallow in UK, as that’s the name it’s most commonly sold under there. Dried and frozen moroheiya, rather than fresh, are what’s likely to be stocked anywhere that has it.

On Amazon, here are some good options: