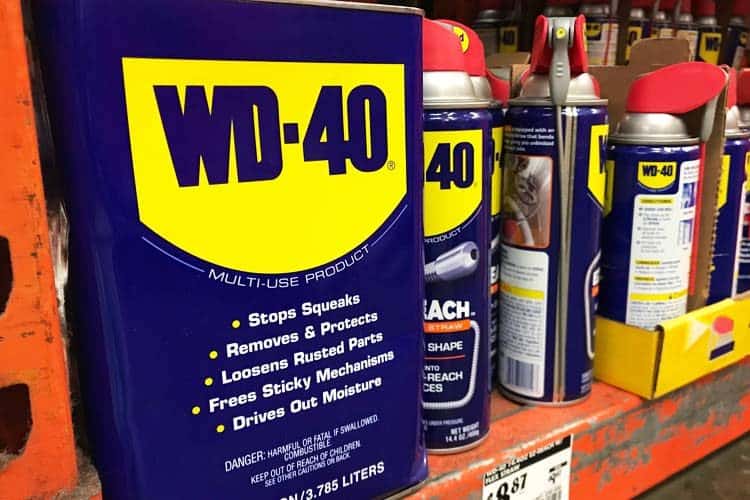 Is WD-40 Toxic? Natural Alternatives To Substitute With

Q: Is WD40 toxic to animals (like dogs, cats, and birds) or to humans?

A: The WD in the name stands for “Water Displacement” and the 40 signifies that it was the 40th version of the formula. It was introduced in 1953 by a San Diego company. Originally, it was used by the U.S. military for cleaning Atlas missile parts.

Today some people use it for seemingly anything and everything that squeaks, squeals, or sticks.

The ironic part is that WD-40 is not really a true lubricant.

Its lubrication-like effect comes from it being a solvent and rust dissolver. It dissolves components (e.g. debris and rust in hinges) and this stops their squeaking. In turn, they glide smoother.

So what are these magical dissolving chemicals and are they dangerous?

Well to answer the first part of the question, no one knows exactly what these chemicals are!

The Rocket Chemical Company (later re-named WD-40) never patented the formulation. That’s because doing so would require disclosing the ingredients in a public patent application. Like the formula of Coke, it’s their trade secret.

The closest answer you can get are the broad chemical categories they are required to disclose on the Material Safety Data Sheet (MSDS):

This safety data is for the standard or regular aerosol cans of WD-40 sold in the US and Canada. It’s classified as their low VOC version (25%). (1)

If you want a bio-based naturally-derived alternative, here’s the lube spray brand we’ve used for 5+ years.

The answer on human toxicity

WD-40 does not contain any known or suspected carcinogens, however it does contain some toxic chemicals. Inhaling high concentrations may cause respiratory problems and central nervous system side effects, like headache, nausea, and dizziness.

According to the data sheet, WD-40 has “low oral toxicity” which means that eating, drinking or swallowing it may cause effects such as stomach ache, diarrhea, and vomiting.

None of the chemicals in WD-40 are known to cause birth defects or reproductive harm.

According to current knowledge of chemistry and health, claims that WD-40 causes cancer are not true. That’s a myth, since there are no known carcinogens inside. 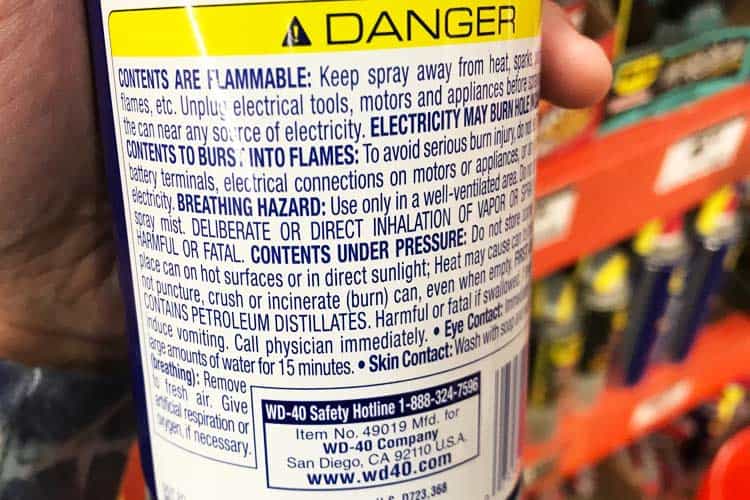 Numerical measures of toxicity are used by regulatory bodies like OSHA for quantifying how toxic something is.

For example, the amount of a substance required to kill 50% of the test animals with a single (acute) dose. This is known as LD50.

According to numerical measures of toxicity, WD-40 reports its formula is not classified as toxic. The LD50 (lethal dose for 50% of test animals) would need to be the ingestion of 5,000+ mg of WD-40 per kg of body weight, or 2,000+ mg for dermal exposure.

In short, WD-40 is considered safe according to the guidelines set forth by governments and regulatory bodies. However, it still can pose health risks and ultimately, these are synthetic chemicals which may not fit your lifestyle of natural and organic living.

Dangers for dogs and pets 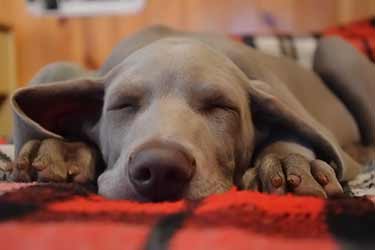 If your dog accidentally licked WD-40, it probably will be fine. There is no need to see a vet. However, repeated exposure and licking or skin contact with the chemical may be toxic to dogs and other pets.

Animals are not smart enough to know what they should and shouldn’t lick or eat. That makes this synthetic chemical concoction potentially dangerous if it is used on something they have access to.

For example, something at ground level.

For cats this is more problematic, since they can climb pretty much anywhere.

Birds, such as parakeets, are notorious for eating paint chips and other bizarre behavior. You certainly would not want WD-40 used on their cage door, or on anything they may pick at.

Cooking spray instead of WD-40?

Given that WD-40 is made from petroleum byproducts and chemicals which you can’t eat or have prolonged skin contact with, it make sense to seek more natural alternatives.

After all, even though you’re not licking mechanical parts, your pet or toddler may be. Even if that’s not applicable to you, one must ask the question… what happens to these chemicals once they wear off moving parts? Where do they go? 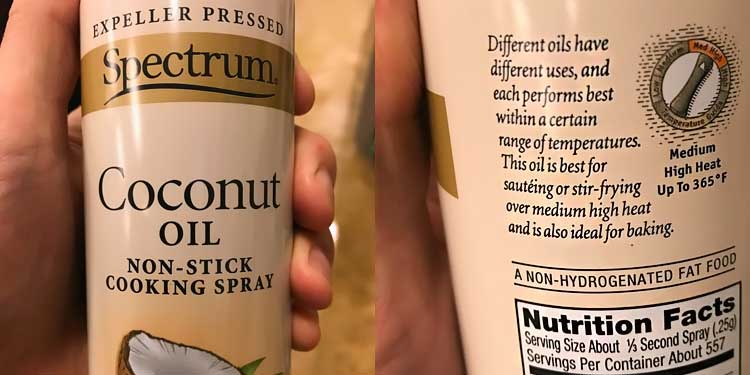 If lubrication is all that’s needed, something natural to use instead of WD-40 is mineral or vegetable oil, such as on door hinges. However, do not use vegetable oil on anything that makes contact with rubber, as fats degrade and destroy rubber and latex.

The benefit of using cooking spray, like Pam, instead of WD40 is that it’s a food-grade material. Even if it gets accidentally ingested by a person or pet in a larger quantity, there’s no worries about poisoning or toxicity.

If you don’t have cooking spray in your kitchen and need a quick and cheap replacement for a temporary fix, you could use a few drops of olive oil instead of WD-40. Apply with a Q-tip onto the part that squeaks or sticks.

Raw unrefined coconut oil would not be recommended, as it is a solid fat at room temperature. The fractionated (processed) coconut oil found in cooking sprays may work but is not ideal.

For the non-lubricating properties of WD-40, like dissolving debris which clogs up a moving part, organic alternatives could be orange oil or apple cider vinegar. Undiluted dish soap works wonders, but make sure you clean it up thoroughly afterward.

Cooking spray will provide lubrication, but only as a Band-Aid. It will wear off quickly and may gunk up the parts, making them worse than they were to begin with.

There are natural alternatives to WD-40. Brands include Plews & Edelmann UltraLube 4X, Renewable Lubricants Bio-Penetrating Lubricant, and Lubegard Zer0. These bio-based lubricants are made from plant oils, rather than petroleum.

These are competitors to WD-40 which are eco-safe, non-toxic, and usually odor free.

UltraLube 4X is not food-grade but Renewable Lubricants Food Bio-Penetrating Multipurpose Lubricant is. It’s specifically designed to be a light lubricant for food processing equipment. It’s sold on Amazon.

For lubricating and cleaning, Hoppe’s Gun Medic is a bio-based cleaner and lube. While it is designed for rifles and pistols, it could work well on tools and moving metal parts. Here’s the link for it.

The best natural lubricator on the market is UltraLube 4X spray. Like WD-40, it lasts a long time. Unlike WD-40, it’s VOC-free and made from high oleic vegetable oils. The formula is designed to penetrate rusted and sticky parts, as well as lubricate moving parts like hinges, chains, ball bearings, rollers, and windows.

The 4X in the UltraLube name comes from it having 4 times the lubricity as traditional oil-based (according to manufacturer).

Is that true and if so, how long does UltraLube last?

The reason this can looks a bit tarnished and beat up is because we’ve been using it for nearly 5 years now. This same can! It still seems to have about 15% left, too.

We have nothing but good things to say in our review of UltraLube.

On a regular basis, we use it to lubricate the arms of this Precor elliptical. The right-angled connection of its arms you see near the floor begin to squeal and not glide smoothly over time. We average over 50 miles every week on this exercise machine, so you’re talking well over 2,000 miles per year of lubrication that works.

It’s occasionally used on the house’s manual roll-up garage door, as well as an office chair. It works so good on the latter, we really only have to spray the moving parts of the computer chair once per year. 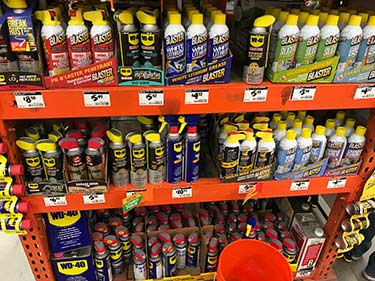 We originally bought UltraLube at Home Depot. When we went back there to buy another can and for the purpose of research for this article, we discovered they no longer carried it. It’s not in-store or on their website. In fact, none of the WD-40 competitors sold by Home Depot are natural or bio-based lubricants. You can get UltraLube on Amazon.

For food-based machinery, although we haven’t used it ourselves, we’ve heard many positive reviews for the brand Renewable Lubricants. Here’s the link for their spray.