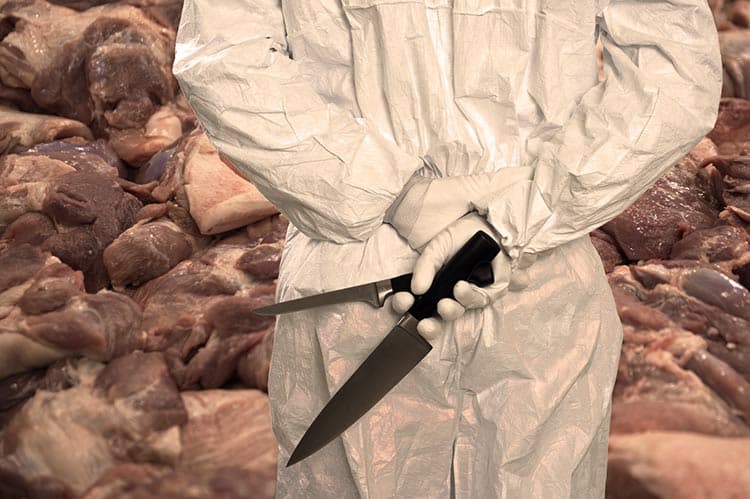 Is Meat Bad For You? Antioxidants In Meat vs. Vegetables

We occasionally receive emails or comments questioning why we rarely cover meats or animal-based superfoods.

The fact is, even iceberg lettuce you can buy for a buck has 1,400% more antioxidants than salmon.

Nor do they want to hear that salmon have less Omega 3’s than cheaper plant-based foods such as chia seeds.

Or the fact that fish don’t even make omega 3’s. Did you know that all omega 3 is vegan originally, as only plants produce the essential fatty acids? Animals only get them from eating plants!

The follow-up response (or accusation) is that we must be cherry-picking our comparisons. Because certainly there must be natural antioxidants in meat.

Are there antioxidants in red meat? White meat? Meat products? What about fish?

The answer to all of the above is almost none, at least when you compare them to fruits and vegetables. So is meat bad for you? Let’s review the facts…

In 2010, Nutrition Journal published an extensive study titled “The total antioxidant content of more than 3100 foods, beverages, spices, herbs and supplements used worldwide.” No, this wasn’t some slant piece done by a bunch of hippie vegans. Rather, it was a respected board of 16 scientists from throughout the world.

If you want to read through the analysis of all 3,100 foods as documented in the 138 page “additional file” of the study (1), then feel free to knock yourself out. But if you want the cliff notes version, keep reading.

This research committee did not cherry pick their foods. They included 24 categories:

Within those 24 categories are the 3,100 foods. There’s some of everything and for the most popular foods, often several different versions or brands are tested.

For example in the “meat and meat products” category, there are 31 different types of red meat alone which were tested for antioxidant content.

There are the most common things, such as hot dog and a hamburger patty. There are the more exotic red meats you probably rarely or never eat, such as a moose steak or a Norwegian reindeer steak (yeah, don’t eat Rudolph). Of course, a regular steak made from a cow’s butt is in there, too.

To prove we’re not cherry picking, let’s look at the the type of red meat with the most antioxidants.

710 is still quite low, but compared to what many consider to be “bad meats” such as a hamburger patty (110) or a steak (10), one could perhaps make the argument that liver is more nutritious, relatively speaking.

We all know the general public has a perception that red meat is considered less healthy than white meat. Is that accurate or not?

It is true that with a rating of 1,000, a liver from a chicken does have more antioxidants than one from a cow. But we’re guessing you’re not exactly eating chicken liver salads for your daily lunch, so let’s take a look at the antioxidant content in more common forms of chicken, which are all lower:

There wasn’t much turkey in the study, probably because this bird isn’t very popular outside of the U.S. and Canada. Even though there wasn’t a test of our classic Thanksgiving roasted turkey, the dogs offer us some insight:

What about the other white meat, pork?

Among all the white meats tested, pork had both the highest and lowest rated foods:

What is the healthiest white meat to eat? It terms of antioxidant content, surprisingly it’s fried bacon! That’s right, what is almost universally considered bad for you is the healthiest, at least for one category of nutrition.

But antioxidants is probably the only category bacon excels at. For sodium, cholesterol, saturated fat, and a laundry list of other reasons, bacon might be the worst white meat to eat. Not to mention, processed meats such as bacon were singled out as being the most potent among meats for causing cancer, according to the World Health Organization (2).

Is fish healthier than beef or chicken?

Unlike red meat, in our society fish (and seafood) is often hailed as a healthy option. The Mediterranean diet and others recommend fish versus red meat. In the study there were 32 different types of fish and seafood that were tested. Here’s a sampling which includes those with the highest and lowest scores:

That’s another shocker for most. Is fish as good for you as you had thought? It’s true that many, such as salmon, are rich in essential vitamins such a B12, D, and the B complex. It is also true that salmon is an excellent source of protein. But with over 50% of the calories coming from fat – and as mentioned at the start – salmon fat is not giving you as much of the omega 3’s as you may have thought, so can you still classify it as a superfood?

Antioxidants in meat vs. vegetables & fruits

Are we cherry picking the meats discussed? Absolutely! We included the highest ORAC rated for each category, so our analysis is actually slanted towards being pro-meat. But as you’ve seen firsthand, the perceived consensus can often differ from facts, or at least when it comes to antioxidant content…

…fried bacon has the most natural antioxidants among all types of meats
…raw salmon has the least antioxidants, less than any other fish, seafood, red or white meat

You probably would have guessed the opposite for those two foods, right?

With all the meats though, it’s kind of like comparing a dime being worth more than a nickel. Even cheap canned tomato sauce has higher ORAC than all of the fish and seafood tested. Dried kapenta from Malawi comes close, but we’re guessing that’s not exactly something you can pick up from your corner market on a daily basis. And certainly not for the price of canned tomato sauce!

If you don’t cherry pick and instead, simply calculate out the average for all 3,100 foods – taking into account every plant-based and animal-based item tested – this is what you get:

On average, plants have 64 times more antioxidant content than meats

Even when compared against the highest rated meat (chicken livers), the average plant has over 11 times more antioxidant content.

But perhaps the wrong question is being asked. Forget whether or not animal-based foods are bad or good. Because the truth is, vegan diets can be a total disaster too if one is consuming too many refined oils and processed products. Even Oreos are vegan and it would be a farce to claim those are better for you versus salmon.

Rather, the question you should be asking is what are the best foods you can eat to achieve maximum health benefits? If you want a diet that’s anti-inflammatory, anti-carcinogenic, and anti-aging… then the more plant-based whole foods you eat, the better. Not to mention, you will probably have a slimmer waist to boot!