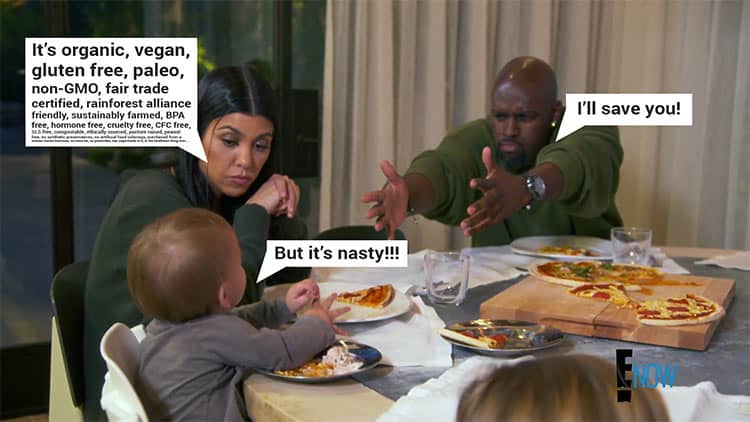 Before we get into the sheer stupidity of Kourtney’s diet of dairy free and whatever else, we should point out that she’s not much different than many people…

She makes dietary choices based on buzzwords, without apparently ever really digging into the science (or lack thereof) behind them.

It’s not that we don’t appreciate her trying to eat healthier (we do), rather we just see it’s quite obvious she has no clue what she’s doing, based on her contradictory dietary choices.

And many people are the exact same way as her. You certainly have friends guilty of it. Maybe you are too.

Case in point = season 12 of Kardashians

Not going to lie, we will watch an episode here and there. Missed last season, but have seen the first 3 shows this year.

Is Kourtney Kardashian on a vegan diet? Her comments suggests she is, but her actions contradict. She will insist on buying only organic at the grocery store and highlighting the veganism of items in episode 3, but episodes/scenes before and after she’s chowing down on dairy and other things which clearly are not vegan (we know the restaurants in LA, trust us).

She gives the real vegans a bad rap. 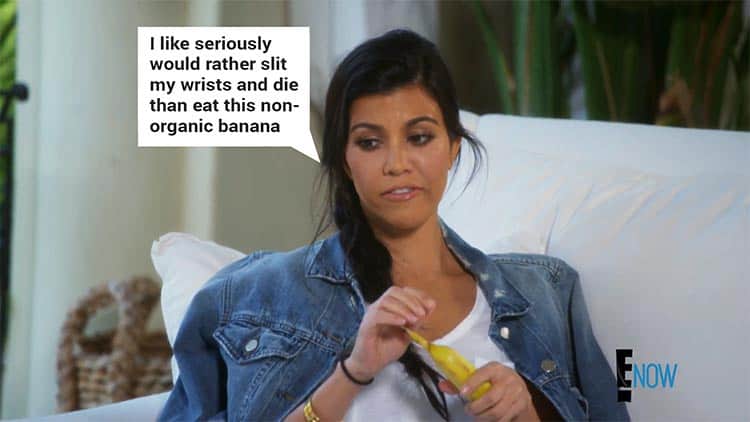 But as long as the food is not discussed, apparently it’s perfectly fine to eat anything and everything, organic or not. Case in point, the plastic clam-shell salads.

Where do Kourtney, Khloe, and Kim Kardashian get their salads? You know, the ones you see them eating from a clam-shell in what seems like every other scene? Those come from Health Nut in Calabasas/Woodland Hills, right off the 101 on Mulholland Dr.

Out of their entire menu, only 4 of the ingredients are called out as being organic…

Only 3 of the 4 would be relevant on the days this pseudo-vegan is actually being a vegan.

She makes a huge fuss over eating one non-organic banana, but seems to turn a blind eye to everything else such as the tomatoes, carrots, cucumbers, sunflower seeds, tuna, egg, dressing, or whatever else she’s putting on those Health Nut salads. As well as pretty much everything you see her eat from other restaurants. 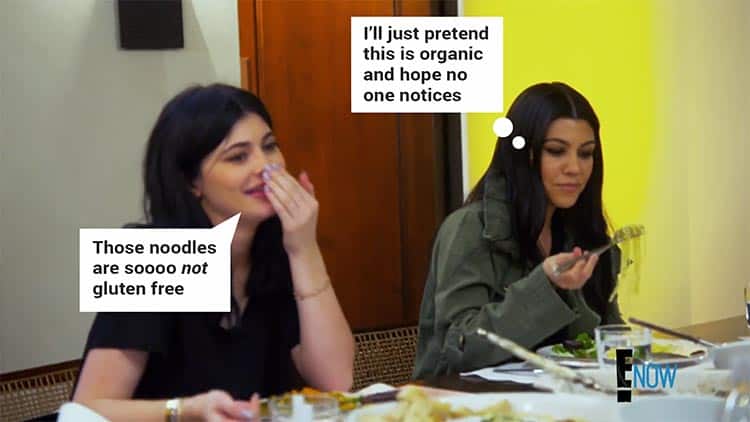 Sure, inconsistent food discrimination is something we’re all guilty of. But not all of us are guilty of preaching we only eat organic and then selectively having a temper tantrum when we get one banana that isn’t.

Though it’s really the gluten free vegan pizza we have beef with, pun intended. 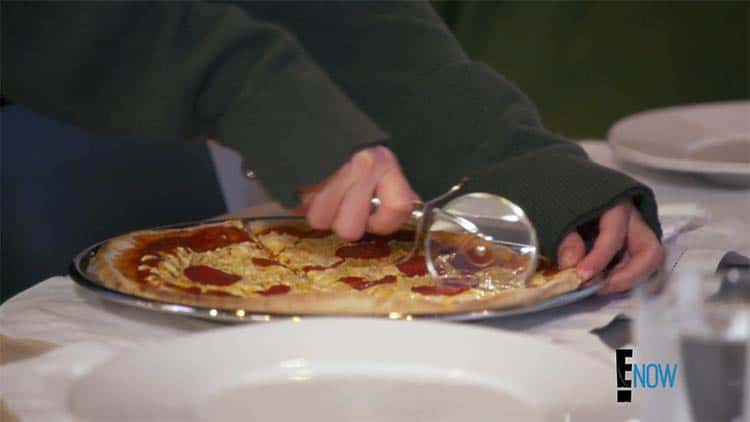 For starters, we’re vegan ourselves (the real kind) so we know how to identify what is and isn’t.

Did Kourtney go vegan just for a day or something?

We’re 99% confident that is either real pepperoni – or – if it is vegan, it’s definitely not gluten free, as Kourtney often insists upon. 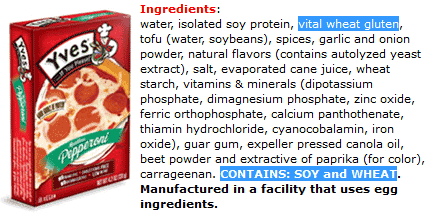 How do we know this? Because we know all the brands of vegan pepperoni on the market, including what’s sold at Erewhon (the grocery store Kourtney shops) as well as at Whole Foods, Lassen’s, and pretty much every other health food store in LA/OC.

If it is vegan pepperoni, it’s the Yves brand of meatless pepperoni. Not only is it not gluten free, but it’s actually gluten on steroids!

We’re very familiar with Yves products and because they use vital wheat gluten as their 2nd or 3rd ingredient in many of their products, it’s a nightmare for anyone with bona fied gluten allergies/sensitivities/delusions.

The other 2 vegan pepperonis on the market are even worse… Tofurky and Lightlife, which list vital wheat gluten before isolated soy protein.

It violates 2 of her things… it’s not organic or GF. Or she’s violating the vegan thing and eating real meat. Either one or the other is happening here.

The crust looks dubious too, but the resolution isn’t high enough to confirm so we’ll shut up about that one.

The biggest hypocrisy is the cheese

Yes, it is dairy free. It’s definitely vegan. That’s not the hypocritical part.

The type of vegan cheese used in this Kardashian pizza dinner is Daiya brand.

90% confident of that based on the melting pattern seen above. 10% chance it’s Follow Your Heart brand, but that has an almost identical nutritional profile and ingredient list, so it’s besides the point.

Yummy? If cooked right, yes. Healthy? Review for yourself and decide… 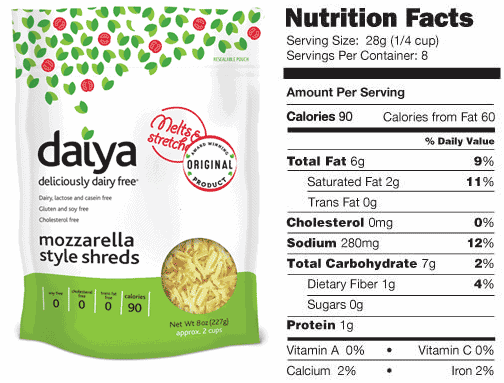 Oh and remember those are all per serving amounts. There’s a good chance a whole package is on one of those little pizzas and we would assume Kourtney is eating at least a couple slices.

Oh and none of it’s organic.

The fact that she’s eating any of these foods is not the problem. It’s a free country and people are allowed to eat whatever they want.

Our problem is the fact that she constantly says one thing and does another. So Kourtney, just eat what you want and please shut up with these labels you give yourself, because you have absolutely no clue what you are talking about.