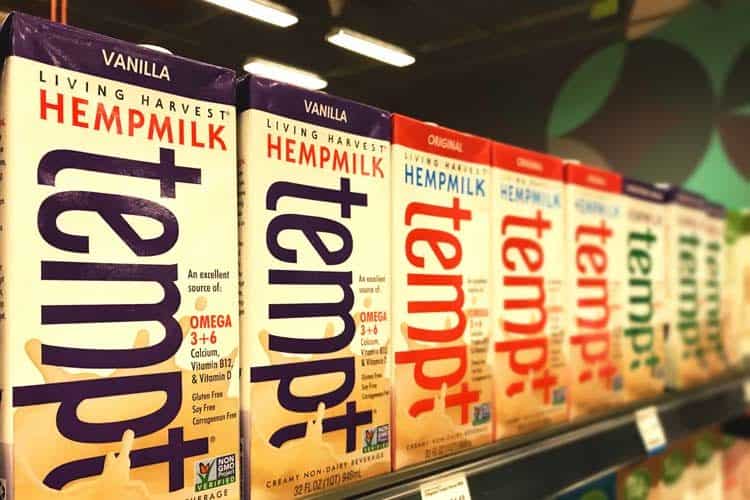 Is Hemp Milk Good For You? Nutrition vs. Almond & Cow Milk

We already have demonstrated how hemp water is a huge waste of money. It’s a bottle of sugar water, with very little of the starring ingredient inside.

Whether it’s that or the less watery substitute for dairy, are you realizing health benefits from hemp that are worth such a premium?

At least if you’re buying the premade stuff from Tempt, Pacific, and similar brands.

What is hemp milk?

Similar to almond milk, hemp is made from the shelled seeds. These are soaked, ground, and diluted in water. Emulsifiers and texturizers like gellan gum and sunflower lecithin are then added. What hemp milk tastes like is similar to the whole seed; a mild nutty flavor that is less creamy than almond and cow milk. 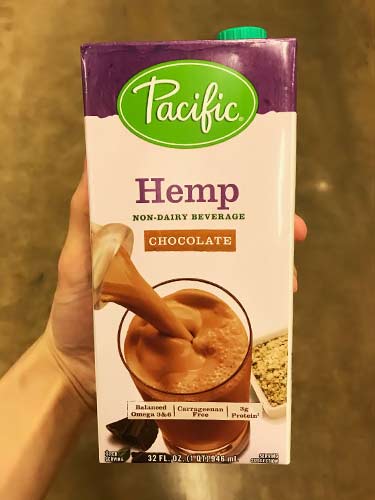 Because its texture is more watery, chances are there will be a fair amount of gums added. Today most don’t have carrageenan, though it’s pretty much guaranteed there will be a potent dose of gellan, locust bean, and/or guar gum.

As is the case with soy and nut milks, flavor boosters of vanilla and chocolate are used.

Unless you buy unsweetened hemp milk, expect to see added sugar in the ingredients. Living Harvest Tempt lists “evaporated cane juice” which is really just a misleading name for cane sugar. Not just our opinion, as even the FDA has said this term “is false or misleading” and shouldn’t be used. (1)

Not that we’re rooting for the sweetened versions, but in their defense it’s worth pointing out that cow milk – whether it’s skim, 1%, or 2% – naturally contains 12g of sugar per 8 fluid ounces. The original sweetened Tempt is only 6g. (2)

Is hemp milk good for you? Let’s review the pros and cons.

Those numbers are based on the brand Tempt, but others like Pacific, Manitoba Harvest Hemp Bliss (sold in Canada) and Good Hemp (sold in United Kingdom) are similar for many of these nutritional categories.

The sugar free hemp is better for diabetics than dairy milk, since even skim milk from a cow contains 12g of sugar per serving.

Here is the label you will find on Tempt Original.

A closer look at the data

The high amounts of essential vitamins and minerals may lead you to believe this little seed is a nutrient powerhouse.

Or at least when it comes to the small amounts used for making hemp milk.

When you turn to the ingredients, you will discover that many of the vitamins and minerals are added:

When you take out the fortification, the nutritional benefits are far less impressive.

The 2g of protein for a 100 calorie drink is very little. Soy and pea milks will have 6-8g.

Is hemp protein good for you? While it technically does contain all the essential amino acids in some amount, it’s not considered a complete source. It’s very low in lysine and the BCAA leucine.

There is the benefit of omega 3, which everyone seems to mention when hemp foods get brought up. How much are you really getting in the milk?

Prepare to be disappointed…

Ingredient labels don’t tell you how much of each item there is but using some basic math and science, we can figure out an accurate estimate.

Sugar is 4 calories per gram and being that there’s 6g in the hemp milk, the sugar alone accounts for 24 out of the 100 calories.

The sunflower lecithin, gellan gum, and other additives contain very little calories. Most likely under 5, though we will use 5 calories as the assumption.

That means 71 calories are coming from the “hemp nut” as the labels call it, which are shelled hemp seeds.

How many seeds does that equal?

For the two most popular brands – Nutiva and Manitoba Harvest Hemp Hearts – both report 170 calories per 3 tbsp serving.

That’s about 57 calories per tbsp.

That means the 71 calories in the hemp milk represents 1.25 tablespoons of hemp seeds.

According to the USDA National Nutrient Database, that amount of seeds will contain 1.09g of omega 3, in the form of alpha-linolenic acid (ALA). (3)

The other 85% of fat is coming from omega 6’s. We already get too much of those in the western diet.

It’s good that a food like hemp provides some omega 3, but that ratio of 1:7 is far from ideal.

The United States does not have an omega 3 RDA but if you look at Japan, who does have one, they recommend a minimum of 2.5g (2,500 mg) per day. That’s for teenage boys. The amounts vary by age and gender.

Now as you probably know, the ALA form is inferior to the EPA and DHA forms found in fish and algae (which is where fish get it from).

Our bodies have to convert ALA to the the EPA and DHA. It’s not an efficient conversion process.

That means if you’re only eating vegan sources like ALA, you should increase the amount you’re taking, to better reflect the recommended intakes.

The International Society for the Study of Fatty Acids and Lipids (ISSFAL) recommends 0.7% of calories per day coming from ALA. (5)

You don’t need to worry about the side effects that happen with marijuana. There is no THC or CBD oil in the hemp-based foods such as milk.

When it comes to gelling agents, most hemp milk brands are without carrageenan. Tempt and Pacific no longer use it. For brands that still do use it, be aware that it influence digestion in a way that “may contribute to the development of diabetes” and the substance is actually used in animal research to increase inflammation. (6)

Others like locust bean gum, guar gum, xanthan gum, etc. have weaker evidence to suggest they’re dangerous. While the verdict is still out, know that hemp milks might need to use more of these gums versus almond or soy milks, because by its very nature hemp is more watery.

While an adverse reaction to cyanocobalamin (synthetic B12) is possible, it’s the most common form used in supplements and fortified foods. It’s the major dosages, such as those by injection, which are of more concern. Not the small amounts added to some plant-based milks. That said, it’s still not the preferred form of B12 since it’s artificially created. (7)

This table shows you the amount of anti-nutrients found in pure hemp protein (8): 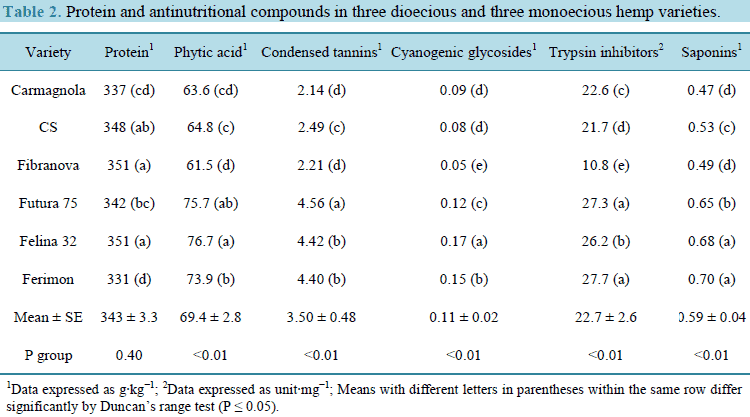 Since the milk is mostly fats (hemp oil) and contains very little protein, this is of a lesser concern versus more concentrated forms, like hemp protein powder.

Despite the possible and theoretical side effects, generally speaking, hemp-based beverages are very well tolerated. Much more so than cow milk, which contains lactose. They’re free of gluten and common tree nut allergens. 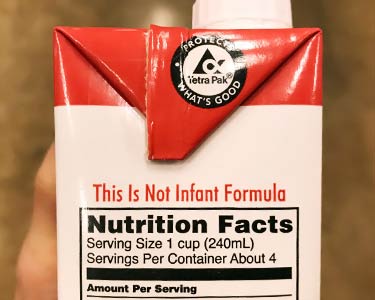 Hemp milk is not good for babies or toddlers. That is perhaps that biggest danger people need to be aware of. It’s a plant-based beverage that is not meant to substitute infant formulas, as it does not provide the necessary nutrients.

The best thing for babies is breast milk from a human. Though understandingly, breastfeeding is not always feasible. If you want a plant-based beverage for babies, on Amazon you can buy Enfamil ProSobee Soy Infant Formula and it has great reviews.

It is true that hemp milk can be healthy for older toddlers and kids as a drink, but only in moderation because it’s not going to provide adequate amounts of essential nutrients like protein, vitamins, and minerals by itself. Obviously though, it’s still more nutritious for them versus most sugar-laden processed juices!

Which is better for you? Here’s a side-by-side comparison of the nutrition facts.

Both have the drawbacks of added gums, emulsifiers, and sugar. The latter can be resolved with buying the unsweetened versions, but there’s no getting around the fillers. Unless you’re drinking a homemade recipe or buying a little $10 bottle from some juicery.

How many almonds in almond milk may be as little as 2%. If there are 1.25 tbsp of hemp seeds in an 8 ounce serving of milk, that equates to a 7-8% concentration of the seeds. Because there are 16 tbsp total in one 8 oz cup.

This is speculation since all of the plant-based milk manufacturers keep their recipes secret, however the evidence would hint that hemp milks contain a higher percentage of seeds than the amount of almonds in almond milk. 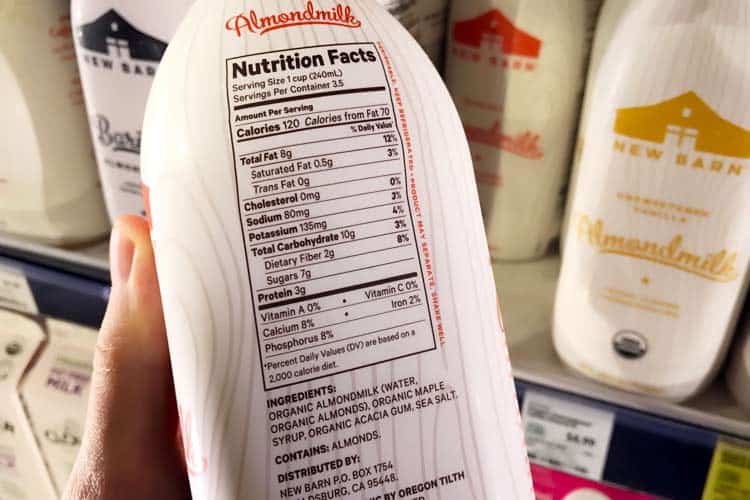 The exception might be the ultra-premium brands like New Barn. That’s an organic almond milk that comes in tiny bottles for a big price tag. Based on the order of ingredients, it’s clear you are getting more nuts and less of the gums.

In terms of how many calories there are in hemp milk, it’s 100 for the sweetened and 70 for the unsweetened. Chocolate is worst at 200. These are all higher than soy or almond milks of comparable types. If weight loss is your goal, hemp milk may be bad for you as a daily choice.

If you want the benefits of the healthy fat, then hemp milk is the winner. Yes it’s more calories, but those are mostly from the fat content. At least some of that is omega 3 – an estimated 1 gram.

When it comes to taste and texture, almond milk is the clear winner. Even before the guar gums and similar, this nut makes a milk that is naturally more creamy than ground hemp seeds. If you’re trying to replicate the texture of cow milk, hemp and rice milks will leave you disappointed.

It is good for you but the omega 3 benefits are greatly exaggerated. You’re not getting a lot.

Perhaps the biggest problem though is the price. If there is 1.25 tbsp of seeds per 8 oz cup and a carton of Tempt only has 32 oz total, this milk becomes a very expensive way to consume hemp.

Even online bulk pricing of a 12-pack from Walmart’s website equates to over $4 per carton. That means you’re basically paying $1 for every 1.25 tablespoons of seed. Remember that’s bulk pricing, as buying the cartons separately is often costlier.

That’s why here at Superfoodly, we instead use other high protein vegan milks and when it comes to hemp, we prefer to just eat the seeds and in their raw form. That better preserves the omega 3 content. On Amazon we buy a 19 oz. bag of Nutiva organic seeds which are a good value.

For getting plenty of omega 3, we buy a vegan plant-based supplement made from algae. Remember, that’s where the fish are getting it from in the first place. You can find that supplement on Amazon and some specialty stores.