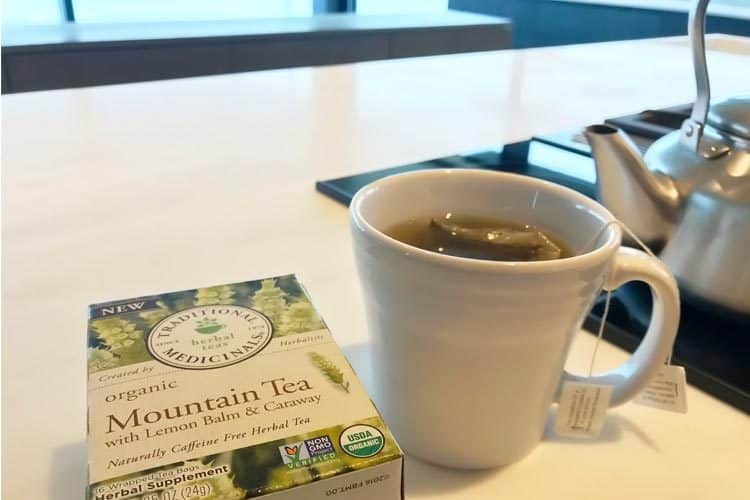 Greek mountain tea is popular throughout the Mediterranean and southeastern Europe. It’s made from the Sideritis scardica plant, which is a stout shrub that grows at high altitudes in rocky soil.

The scientific name, Sideritis, comes from the Greek word sideros. It means iron.

In ancient times, this herb was used on battle wounds inflicted by iron and “cold” metallic weapons. That’s where the name comes from. (1)

That’s why the herb is commonly called ironwort.

Shepherd’s tea is another common name.

The leaves, stems, and flowers are boiled to make a hot tea. It’s drunk for pleasure and traditional medicine. It’s believed to boost the immune system, help the common cold, act as an expectorant in bronchitis and asthma, soothe heartburn and peptic ulcers, reduce stress, promote sleep, and increase energy even though it’s caffeine-free. (2) (3)

Mountain tea does not have a particularly strong flavor, which makes it acceptable to most palates. It tastes like a mild chamomile, crossed with peppermint and lemon.

The smell is a lemony-herbal aroma. It’s quite pleasant. 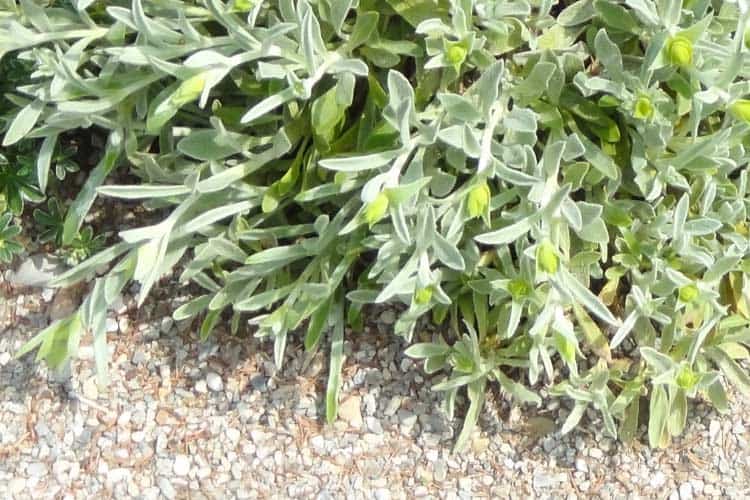 As with most herbal remedies, there is not enough clinical data to conclusively prove any of the purported advantages that Sideritis scardica tea is suspected to have. Therefore, it’s not intended to diagnose, treat, cure, or prevent any disease.

However, you will probably agree that the following preliminary findings are exciting nonetheless.

For a typically brewed cup, the ORAC value of mountain tea is not quite as high as green tea, though its antioxidant effects are comparable due to better bioavailability. This is based on measurements using living cells, exposed to oxidative stress factors and treatment with the teas. (4)

Other research suggests that the ironwort herb is particularly effective at protecting mitochondria from oxidative damage. (5)

2. Reduces anxiety and helps with sleep

Greek mountain tea has a long history of being used for its relaxing and sedative properties. Based on the chemical constituents of the plant, it appears that a couple pinene metabolites are responsible for this; myrtenol and verbenol.

Research out of Germany reports that the compounds interact with GABA receptors in the brain. This would explain why ironwort is believed to be useful for sleeping/insomnia, anti-stress, and other cognitive benefits. (7)

To be clear, amyloid plaque deposits in the brain are not the root cause of Alzheimer’s (no one knows what is). However their presence often correlates with having the diseases. The more it progresses, the more these plaques build up in the brain. 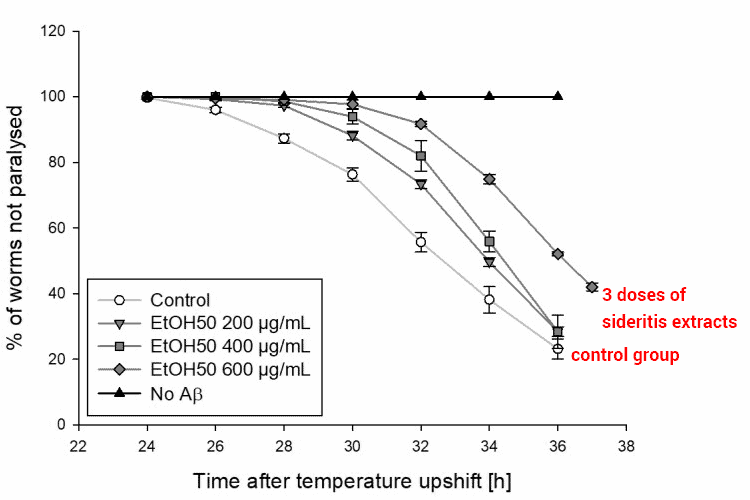 In an animal model of Alzheimer’s using nematodes, Sideritis scardica extracts reduced formation of the amyloid deposits in their heads. This was published in 2018. (8) 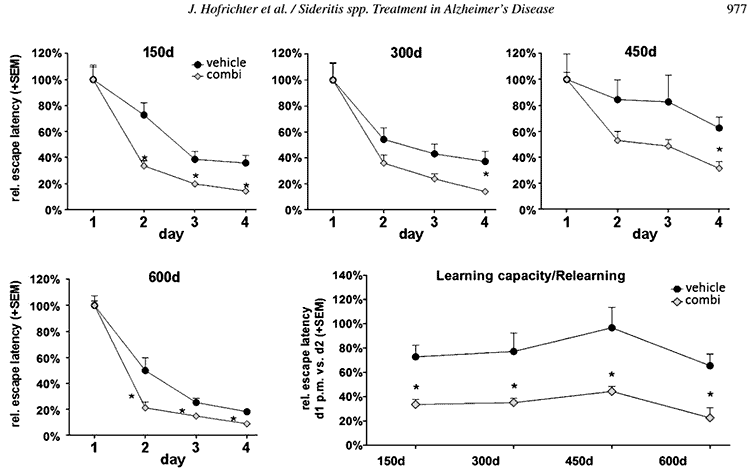 The top lines with the black dots represent the vehicle, which is the inert substance used to administer the extract. You can see how when its used by itself, the effects (or lack thereof) relative to when it’s combined with the plant extracts, which are the lower lines labeled “combi.”

You can see how both in the short term (a few days) and throughout their lifespan (600 days) the learning capacity was better preserved. (9)

In 2017, a university in Hungary tested the ironwort plant on three difference human cervical cancer cell lines (HeLa, SiHa and C33A). At dosages of 30µM or 30 parts per million, their growth was inhibited by around 50%. Note that these are Petri-dish like experiments.

They tested 6 different compounds from the plant but the two which worked the best were pomiferin E and 6-methoxysakuranetin. (10)

They pitted its performance against cisplatin, which is a popular chemotherapy. (11)

The plant contains flavonoids which have been found to have an inhibitory effect on monoamine oxidases (MAOs).

Although human studies have not been done, this research out of Turkey suggests that Greek mountain tea may have natural antidepressant benefits. (13)

There is contradictory data as to whether it can help. The effect may vary by species.

Using the Sideritis raeseri species, Serbian scientists have found compounds in it act as a vasodilator and lower blood pressure in rabbits. (14)

The best tea for high blood pressure, based on science, is likely hibiscus tea.

You’ve probably heard that carrageenan in almond milk and similar is bad for you. That’s true.

Though long before it was used in plant-based beverages, this compound has been considered the gold standard for inducing inflammation in animal experiments.

Scientists put some carrageenan on the skin to trigger inflammation, then see what happens with a given treatment. 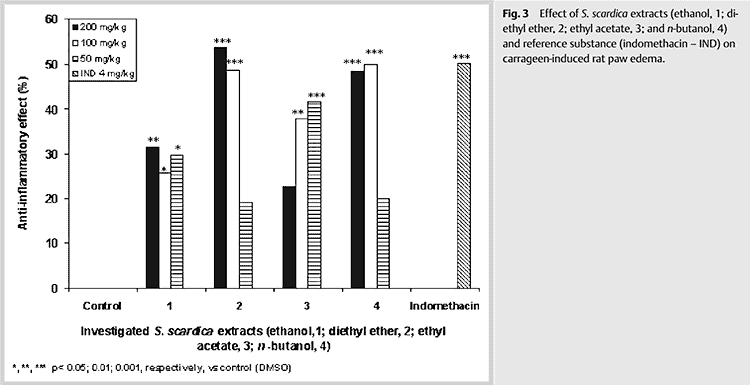 At dosages of 100 and 200 mg/kg of body weight, phenolic compounds extracted from the Sideritis scardica herb were found to have an anti-inflammatory effect equal to that of the prescription drug, domethacine. This was seen in a carrageenan-induced model measuring hind paw inflammation in rats. (15)

While humans have not been tested, there is evidence to suggest that drinking Greek mountain tea might help keep your bones healthy.

Using a rat model of osteoporosis, the group given Sideritis euboea extract over a 6 month treatment period has significantly less bone loss than the untreated group. This was based on measurements of bone density and strength of their tibia and femur. (16)

In rodent models, no toxicity of Sideritis scardica was detected, even at high dosages of 2,000 mg per kg of body weight, given for 14 consecutive days. On the cellular level, genotoxicity and mutagenicity have not been observed, either. (17)

Allergies to Greek mountain tea made with Sideritis leaves, flowers, and stems have not been documented in published medical literature. That said, be careful with pre-made blends because there’s a good chance they may contain known allergens.

You should not drink Traditional Medicinals brand if you are allergic to plants in the parsley (Apiaceae) family, such as fennel, coriander, or caraway. They add some of those to the Sideritis herb.

According to a 2016 report by the European Medicines Agency:

“No reproductive and developmental toxicity studies carried out on mountain tea herb was found in the scientific literature.”

There isn’t data to suggest that drinking Greek mountain tea while pregnant or breastfeeding is dangerous, though on the flip-side, there isn’t data to prove it’s safe. For that reason, avoidance during pregnancy and lactation is recommended.

Despite being a widely consumed hot beverage throughout the Balkan Peninsula, the European Medicines Agency reports that data on adverse reactions from ironwort plant have not been documented in medical or scientific literature. There might be side effects of mountain tea, yet they remain to be identified. (18)

In the US and Canada, Greek mountain tea is hard to find for sale. The only brand selling it in ready-to-brew tea bags is Traditional Medicinals. They include lemon balm and caraway in their blend. It’s USDA certified organic and of course, that also means it’s non-GMO.

Since it’s one of their more obscure varieties, just because a store carries this brand, that doesn’t mean they will have ironwort tea. You can get it on Amazon, Vitacost, and similar online retailers.

If using a sachet or bag of mountain tea, put it in a mug and pour 8 oz. of freshly boiled water atop. Steep for 10-15 minutes. Before discarding the bag, squeeze to maximize the amount of phytonutrients which are released into your drink.

It using loose ironwort, place a small handful in a pot with 10-12 oz of water. Bring to boil and let steep for 10-15 minutes. Strain and enjoy.

We recommend the organic Greek mountain tea by Klio. It has a high flower content and is single origin. On Amazon, you can get their Mount Olympus and Mount Othrys grown.