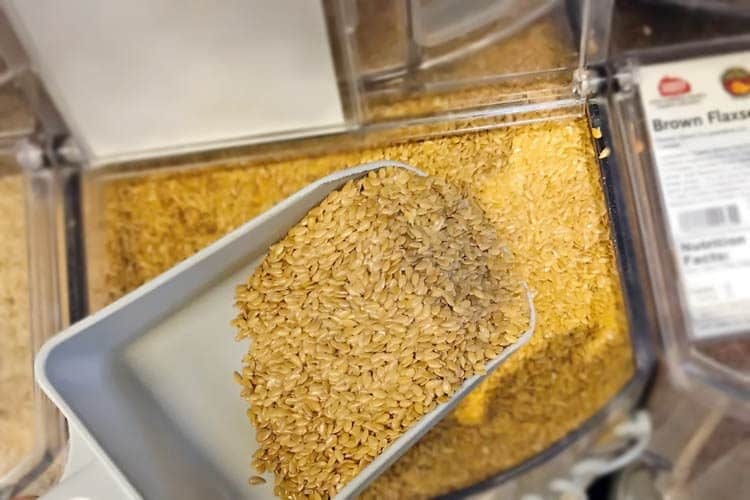 Flaxseed Side Effects: This “Superfood” Can Be Bad For You

What is a superfood? It’s supposed to be healthy and offer you more benefits than an average food.

But just like the definition of “healthy” is subjective, so is superfood.

Flax is almost universally marketed as being a superfood.

Technically not a grain, it’s touted as being Paleo friendly, gluten free, and good for you.

At first glance, that appears to make sense.

For a standard serving (3 tbsp) just consider the health benefits of flaxseed:

Although not all are proven, these health advantages have been suggested by studies. (1) (2) (3)

Can you eat too much flax seed?

With a list like that, you probably want to eat it for breakfast, lunch, and dinner. Many people do just that and if you’re buying organic foods, chances are this seed is inside many of them and you don’t even know it:

If you do your grocery shopping at places like Whole Foods or choose the non-GMO and organic brands sold elsewhere, it’s almost impossible to avoid this ingredient. Not even the local Whole Foods here in Los Angeles offers flax-free crackers, other than the 1g of protein per 150 calorie kind of rubbish (rice, corn, and potato based). That’s why the men here end up buying many of the shelf-stable products like that online. And yes, if you’re a man, you need to be very concerned about its prevalence.

Why is flax bad for you?

Like animals, plants have hormones. Phytoestrogens are what the plant-based versions of estrogen are called.

Phytoestrogens are certainly less potent than actual estrogen found in dairy and meat, as that is identical to human estrogen. Still though, the plant-based sources should remain a concern for those trying to avoid them.

The reason flax is unhealthy is because it is the most potent source of phytoestrogen. If you look at the the 50 highest sources, you will see that flax seeds (but not the oil) are exponentially higher than any other source. Even the #2 spot – raw soybeans – measure 73% lower.

Spots #2-9 are all soy-based foods. After the raw beans, it’s soy nuts, tofu, tempeh, and textured soy protein. Their estrogenic activity comes from isoflavones, while flax gets it from lignans.

Male bodybuilders shun soy protein powder, but its total phytoestrogen content is only 8840.7 µg per 100g. Why aren’t they also shunning these seeds, which are a shocking 4,200% (42 times) higher than soy protein, at 379,380 for the same weight!

Unfortunately some of the health benefits for men and women are likely because of these estrogen-mimicking lignans. That’s what research suggests regarding the possibility of prostate and breast cancer risk reduction. (4) (5) (6)

Do you know what else lowers prostate cancer risk? Chopping off your balls.

Because that would lower your testosterone levels, just like what lignans do (7):

“…lignan has been shown to reduce testosterone (total and free), and 5α-reductase, the enzyme which converts testosterone to its most active form, dihydrotestosterone [DHT].”

Of course, castration is just about the worst nightmare for any man and doing so for cancer risk reduction would be insanity. Unless you were already diagnosed and had no other choice, due to an aggressive form of the cancer. (8)

Finasteride (Propecia) works by reducing 5a-reductase activity, so the reviews of flaxseed for hair growth may have some legitimacy behind them. Though if it works, at what cost?

Now it is true that for men who have high testosterone, or a ratio of too much testosterone to estrogen (yes, men need some estrogen too), then eating lignans might be good for you. In that scenario, any side effects from regular use of flax seeds may actually be useful.

But to universally advise all men to eat flax to possibly reduce prostate cancer risk is dangerous advice. Many middle-aged and older men have too low of testosterone, so lowering it further may be harmful.

Beginning at age 30, if you’re a man your testosterone decreases by approximately 1% per year. This is why the rate of hypogonadism (low testosterone) increases with age, as seen in this graph (9):

After age 60, you will see around 20% of men have hypogonadism, as seen with the light blue bar for that decade.

Those men with low T would not benefit by having these estrogen-like compounds in their bloodstream. If it’s just the omega 3 advantage you’re after, stick with the refined oil instead of the seed.

Bottom line: Your doctor needs to measure your hormone levels to determine whether or not it’s a good idea to eat flax everyday.

In the Journal of Clinical Oncology, there was an editorial titled “Flaxseed and Breast Cancer: What Should We Tell Our Patients?” The author was wary of all the advice being given to women that they should eat more of this superfood (10):

“…until a trial of lignan intake/supplementation and disease end points quantifies the risks and benefits of such an intervention, the prudent clinician should be wary of recommending high doses of any dietary compound solely on the basis of laboratory and observational epidemiologic studies.”

Now that was a number of years ago, in 2011. Since then, there was one small clinical trial involving 24 postmenopausal women who had breast cancer that was of the estrogen receptor positive type (ER+). In other words, estrogen affects that type. (11)

They wanted to see if there were side effects or interactions of combining the hormone based chemotherapy anastrozole (Arimidex) with a flaxseed supplement. None were observed. Interesting, but irrelevant to the general population looking to reduce their risk.

While the effects on risk haven’t been clinically studied, there is plenty of other data to suggest it may be helpful.

MCF7 is the most studied breast cancer cell line in the world. In lab research using it, flax seed lignans were found to boost production of estradiol (estrogen) (12):

“Production of estradiol is elevated in MCF7 cells in a concentration-dependent manner after stimulation with isoflavone and lignan extracts from Linum usitatissimum [flax].”

They also seemed to positively affect the estrogen receptor (ER) expression in these MCF7 cells.

Not all breast cancer is estrogen receptor dependent. In both dependent and non-dependent cell lines, lignans have been found to have an antiproliferative effect (reduce growth). (13)

Any sort of human study to measure cancer risk is difficult. Be wary of those which just measure risk over a one or two year period, because that’s far too little time. After the initial cell mutation which causes breast cancer, it takes 6 to 8 years before the tumor is even big enough to be seen on a mammogram. (14)

That’s one of the reasons why conducting clinical studies on diet and this disease is so difficult. To be done right, it takes a very long term review.

That being said, there was a short-term study which hints that lignans may help. They weren’t testing it as a preventive measure, but rather they were measuring the effects it had on the tumors from the time diagnosis ’til surgical removal. On average, this was about 5 weeks. (15)

During that waiting time:

The results? All were good signs:

“Dietary flaxseed has the potential to reduce tumor growth in patients with breast cancer.”

To reiterate, that’s their opinion. This theory has not been proven.

Good for women, bad for men?

You can’t make that kind of gross generalization, because as pointed out, some men have too much testosterone. Phytoestrogens – like lignans and isoflavones – in their daily diet may be useful.

However in middle-aged and older adults, as a general trend, it seems men would be less likely to be helped from lignans, and in fact, possibly harmed by them.

That’s why hormone replacement therapy is so widely used, to help offset that which is lost. If phytoestrogens work and have an estrogenic effect on the human body (which is still debated somewhat) then the supplemental effect would likely be an advantage for aging women.

Due to the potency of this plant versus other phytoestrogen food sources, adverse reactions need to be considered for both genders, but especially for males.

Side effects of flaxseed

Is flaxseed safe during pregnancy? Given its known ability to mimic estrogen and influence production, eating it in large amounts or everyday may be harmful. It may throw off hormonal balances.

To be clear this is only a hypothetical health risk, because pregnant women have not been studied, nor have those who are breastfeeding. Small amounts are likely safe, but frequent or daily consumption should not be done without consulting your doctor. 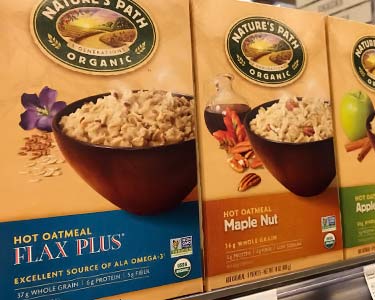 Reactions related to the digestive tract are due to its high fiber content. Those who have IBS with constipation or another disorder which causes intestinal blockages need to be careful when eating them, as well as chia seeds.

Although not proven, there has been more than one study which has observed lower blood pressure with consumption of flax. For most people that would be a good thing. But for the minority of the population who have hypotension (too low of pressure) then this side effect could be dangerous. Likewise for those on medication to carefully control their blood pressure. (16)

Lower fasting blood glucose has also been observed. Normally having this lower would be helpful for those with diabetes, but it could create a drug interaction and drop the level too low. (17)

Gynecomastia, lower libido, and decreased muscle mass and are not symptoms which women would be expected to experience. These are things men need to watch out for.

Refined flax oil should be safe for men, since it does not typically contain lignans. Watch out though because a number of brands are advertised as “high-lignan oil” and that’s because they add the ground seeds in after refining the oil.

Can you be allergic to flax seeds?

Since it is plant proteins we are allergic to, refined flax oil is unlikely to be a problem since only parts per million of the protein would be present. However with whole or ground flax, you may have a sensitivity if you experience hives, itchy eyes, or other common symptoms of an allergic reaction.

Fortunately, how many people that have a flax allergy is very low. 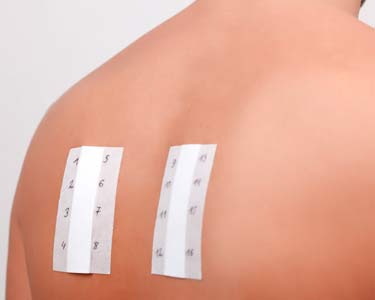 In Japan, the first wasn’t even documented until 2014 when a 29-year old woman ate bread containing the seed. She experienced anaphylactic shock. (19)

In addition to a handful of case studies involving anaphylaxis , contact dermatitis has also been reported after ingestion. (20)

Even though the antiproliferative and menopausal relief benefits are unproven, the evidence suggests this food is probably good for women, on average.

If you’re a guy, consider these superfoods for men instead.