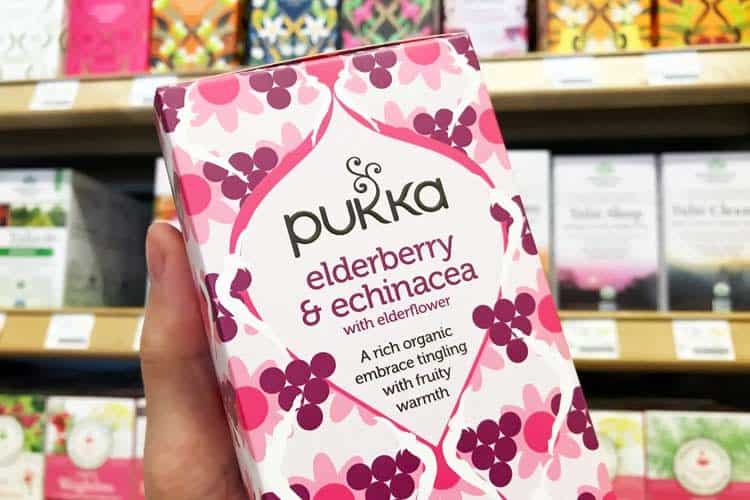 Based on a quick Google, you are told this beverage is a “powerful natural remedy” that can be used to “alleviate colds, the flu, and bronchitis.” They say that it’s filled with vitamins, minerals, and antioxidants.

The problem? Most of that hype is exaggerated and some is totally fabricated!

That’s not to say elderberry tea is bad for you. Being an herbal tea, it does not have caffeine. You can drink this healthy and low calorie drink round the clock. And yes, there is evidence to suggest it might offer some immune supporting potential.

What the science really says 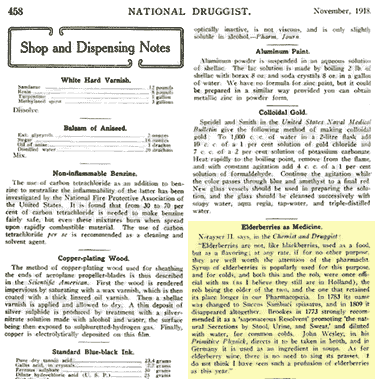 Found throughout the warmer climates of North America and Europe, the elderberry (Sambucus nigra) has been used as herbal remedy for centuries and probably even longer. Some 400 years ago it was part of The Pharmacopoeia for The London College of Physicians.

Even in the more modern era it was touted for treating the common cold, as seen in volume 48 of The National Druggist pictured here.

Using elderberry for colds and flu has been clinically evaluated, though not in the form of a tea. Rather it has been with Sambucol and Original Sambucus, which are two brands of the concentrated berry extract, sold as dietary supplements.

Does elderberry tea help flu? Neither the tea, nor the concentrates like Sambucol, have sufficient clinical evidence to prove they work. What scientists have found is that compounds in the fruit appear to boost cytokines.

Think of cytokines as messengers for the immune system. When activated, they tell cells to perform an action. In a study with 12 people, it was found that standardized extracts increased cytokine production by 2-45 times. In contrast, Echinacea was not found to affect cytokine levels. (1)

Now to be clear, that was just one tiny study. Even though higher cytokine production would be expected to increase immunity, it remains theoretical.

During the past couple of decades there have only been a small handful of human studies evaluating whether elderberry products (i.e. those branded syrups) can help with colds and flu. Even though the clinical results published so far seem promising, there is currently not enough data to prove a health benefit. (2) (3) (4)

So as of now, this berry in any form remains unproven for efficacy against colds, coughs, and all other illnesses. If it does have antiviral or antibacterial advantages, it’s probably not in the traditional sense. The science so far suggests it would be doing so indirectly, by the ramping up of cytokine production. Likewise for the allegations about helping asthma. 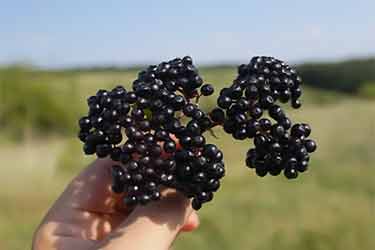 It is true that fresh elderberries are loaded with antioxidants. With an ORAC value of 14,697 they have 3x the concentration of blueberries.

Though making claims about the antioxidants in elderberry tea are premature. Of course they have them, as the anthocyanins are what give it the dark purple color. Yet no one has published testing to document precisely how much antioxidant activity is in a standard brewed cup.

Not to mention, there’s not even a “standard” recipe. Elderberry Echinacea tea uses a blend of both plants. Some recipes use elderberry flowers instead of the dried berries.

If you think a raw infusion is the way to go, think again. Even though it may preserve more antioxidant content, the raw berries are poisonous and should not be eaten or used in tea. 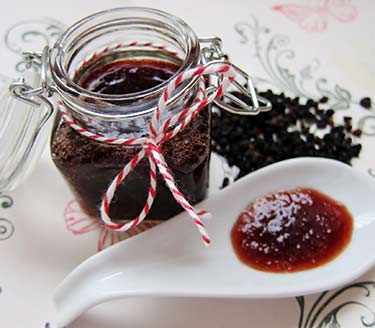 As with the tea, elderberry jam – which is popular in Europe – won’t have the same vitamin content as the fresh fruit.

One cup of the raw berries provides 52.2 mg of vitamin C (ascorbic acid) which is almost 90% of your daily value. Vitamin A clocks in at 17%, B-6 is 15%, and there’s also some thiamin, riboflavin, folate, and niacin. That’s according to the USDA National Nutrient Database. (5)

Yet that is for the fresh berries and a lot of them. One cup weighs 145 grams. Most tea bags contain just 2 grams of powder.

Granted, what’s in tea is dried and much more concentrated – an estimated 8-10x – yet you can’t extrapolate the amount of vitamins from that. Many of these, especially vitamin C, degrade quite easily with heat and light.

There are very few manufacturers of elderberry tea and none of the brands provide nutrition facts. It’s safe to assume there are vitamins, but you can’t claim they’re a “rich” source as some bloggers allege.

The good news is that minerals will remain intact, even after heating and processing.

One cup of the fresh berries offers 6% of your daily value of calcium, 12% for iron, 11% for potassium, 6% for phosphorus, and smaller amounts for zinc and magnesium.

But again that’s for the fresh fruit. No one has published data for the levels in teas. Whatever the amounts are, they must be trivial.

Some packages list zero calories which technically is a loophole in the law, allowing for 10 calories and under to be rounded down to zero. Regardless, a standard serving of this drink will be excellent for weight loss as it has almost no calories.

If a recipe is entirely herbal and excludes Camellia sinensis (black or green tea), then there will be no caffeine in it. 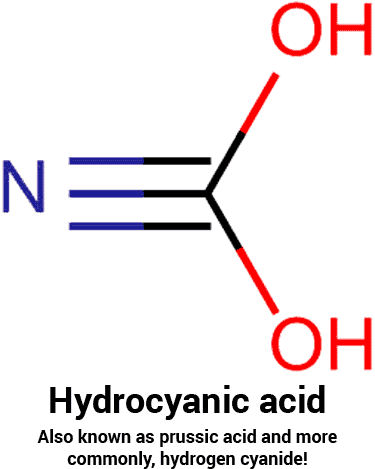 You should not consume unripe or raw elderberries in any form, whether that be the fruit or things made from it, like drinks and syrups.

The raw fruit contains bitter alkaloids and glucosides which are poisonous; sambucine and hydrocyanic acid. The latter is more commonly recognized by its other name… hydrogen cyanide!

Before you freak out, dogs can’t eat apples because of the cyanide in their seeds. This poison is more prevalent than you think.

These amounts are small in these berries, but they can still cause nausea, vomiting, and potentially even worse reactions. Fortunately, the ripe berries have a far lower amount and what remains in them is destroyed by the heat of boiling or cooking. (6)

When consumed in typical quantities, there are no known side effects of elderberry tea if it’s made using adequately cooked berries/extract. Or more accurately stated, reactions have not been typically reported but without clinical trials of the tea, it’s impossible to rule it as being 100% safe.

The biggest safety concern involves autoimmune diseases like lupus, rheumatoid arthritis, multiple sclerosis (MS), Crohn’s disease and others. Because if it truly does revs up the immune system as the science suggests, then that could intensify the symptoms of those diseases.

Allergies to this fruit and its flower are rare, so that will be of minimal risk. In fact in the PubMed database, there’s only one piece of research on this topic.

Out of 3,668 patients given the skin prick test, only 0.6% appeared to have an immunoglobulinE (IgE) reaction, meaning they have a potential allergy. Now skin tests are notorious for false positives, which is why they alone are considered insufficient for diagnosing food allergies. So the actual percentage of people with an allergy to eating elderberries is likely far lower. Furthermore, some may test positive because of reactions to the pollen and not the fruit that’s eaten. (7)

Is elderberry tea safe during pregnancy?

This too is an unknown. Even though there is not evidence to suggest it’s dangerous, the same can be said about its safety.

Although not specific to the tea, UCSF conducted a survey among pregnant women who were using dietary supplements. Out of 150 surveys completed, 20 said they were using supplements and among them, one woman reported “gastrointestinal discomfort” from using an unnamed elderberry supplement. On a related note, with Echinacea, a “taste disturbance” was noted. (8)

Even if the mothers are safe, it’s unknown if the baby inside is. As with almost all dietary supplements (and foods for that matter) there isn’t enough data to know for sure what effect these things have, whether positive, negative, or neutral.

Whether you’re pregnant or not, be extremely careful with premade teas. Many have a laundry list of different herbs and spices which aren’t listed on the front of the box. If you don’t read the ingredients label, you won’t really know what’s inside. This brand in the United Kingdom, Pukka, is a good example of that.

How to make elderberry tea

You have two options. Make it from scratch or buy the pre-filled teabags which are ready to go.

Since the taste of elderberries are slightly bitter and less sweet than raspberries and blueberries, the tea won’t be a sugar explosion in your mouth. Its flavor is the subtle sweetness from the berry, which can be enhanced with honey or monk fruit.

If you want to make it from scratch, here’s how… 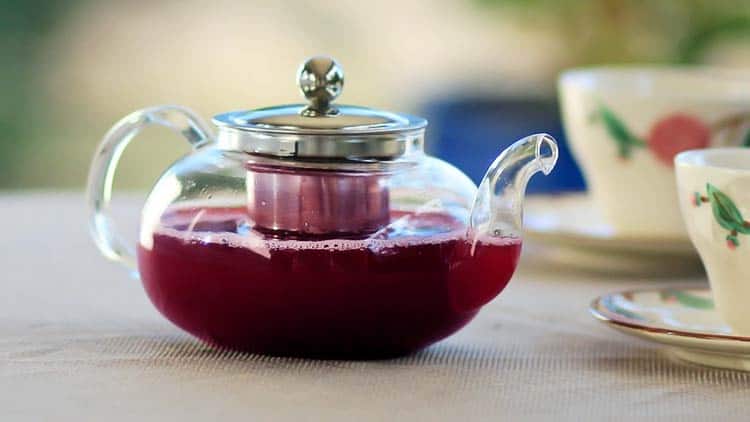 The addition of spices and sweetener comes from us, but the ratio of berries to water comes from the instructions offered by Frontier Natural Products. They sell USDA certified organic whole dried elderberries. You can buy their 1 lb. bag on Amazon. 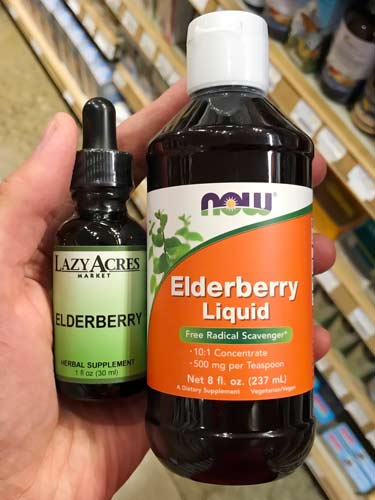 Another option is to make the tea using liquid elderberry extract. NOW Foods sells an 8 oz. bottle on Amazon. That’s 47 servings based on 1 teaspoon per serving. Even though it remains unproven for colds and respiratory infections, some of the studies did use non-branded standardized liquid extract.

If you want ready-to-use bags, finding it for sale is no easy task. Elderberry tea at Walmart or Target is mission failure, at least based on our experience.

To date, we have only seen it at one specialty health food store in Los Angeles and even there, it was only an elderberry and Echinacea blend (the Pukka pictured above).

Online you will of course have better luck. Buddha Teas sells a box of bleach-free tea bags made from organic berries.

The Republic of Tea sells elderflower tea, which is made using the flower blossoms and combined with organic green rooibos. Many love its flavor but know that the phytonutrients and compounds in the flower will differ dramatically from the fruit. It’s sold in a 36 bag canister.

Whatever form you fancy, enjoy it for taste, not as a treatment for anything! It should be used as a dietary supplement only. This plant in any form remains unproven for influenza, colds, and any other illness that other bloggers allege it can help.

These statements have not been evaluated by the Food and Drug Administration. This product is not intended to diagnose, treat, cure, or prevent any disease.
490
SHARES
FacebookTwitter