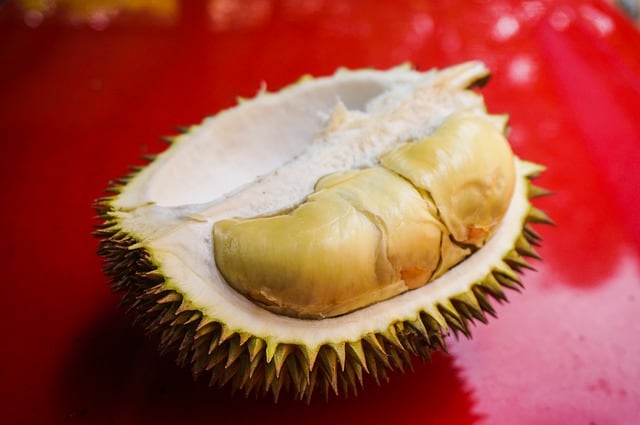 Durian Benefits and Side Effects

Durian is a fruit whose properties and nutritional value are probably appreciated only by the people of Asia, where it comes from. Durian is the most smelly fruit in the world. For this reason, it even has its own ban sign.

However, according to Asians, Durian is the most delicious fruit globally. It also shows numerous health-promoting effects. They say it: “it smells like hell, tastes like heaven.” 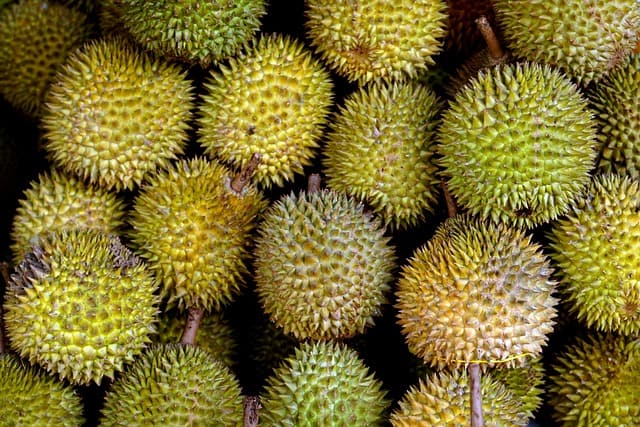 Durian is a fruit the size of a watermelon and can weigh between 2 and 4 kilograms. Another name for Durian is zygbucha, or sundry. They grow on evergreen tropical trees in the hemlock family. These trees are approx. 30-50 meters and have a spreading crown and relatively large flowers.

Durian is a tropical plant. It needs abundant rainfall for proper growth. In India, it thrives on the banks of streams where its roots can reach the water. It grows best in deep alluvial or loamy soils. It usually blooms in March and April or in September and October.

Durian trees are very tall – they can reach up to 40 m in height. They are upright, with a short straight trunk and an irregular crown with rough, thin branches covered with young or coppery scales. Leaves are oblong and lanceolate or elliptic, egg-shaped, rounded at the base with a pointed apex.

They are dark green and glossy on top and covered with gray or brownish-red hairs underneath. It has three-petaled flowers in colors ranging from white to golden brown.

Durian has green skin covered with sharp spines. Inside the Durian, you will find soft, creamy flesh. The flesh of the Durian is yellow in color, and its texture resembles pudding, although many people find it hard to compare it to anything. The name of the durian fruit comes from the spines, which are called “duri” in Malay. 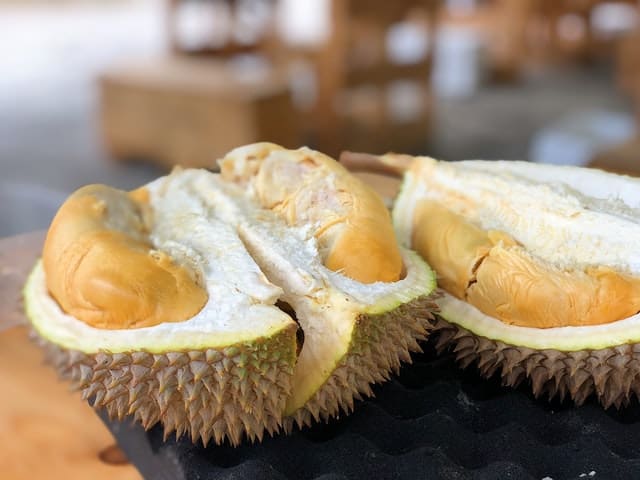 Durian also has numerous health properties. It is worth knowing that this fruit soothes various digestive system ailments and stomach irritation caused by eating spicy food. It is also worth using in case of fever, anemia, or during periods of weakened immunity.

Durian will also improve liver function. A decoction prepared from durian leaves helps in treating depression. It is also worth eating Durian for its skin rejuvenating properties.

Durian has such a delicate texture due to 5 percent fat. Moreover, there are about 150 calories in 100 g. You will also find protein, carbohydrates, fiber, and sugar in Durian. Durian is also a source of vitamin A, C, and B vitamins and minerals such as zinc, phosphorus, magnesium, manganese, potassium, calcium, iron, and sodium. 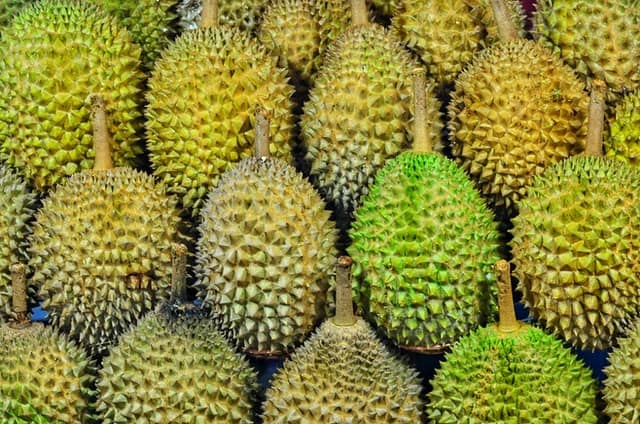 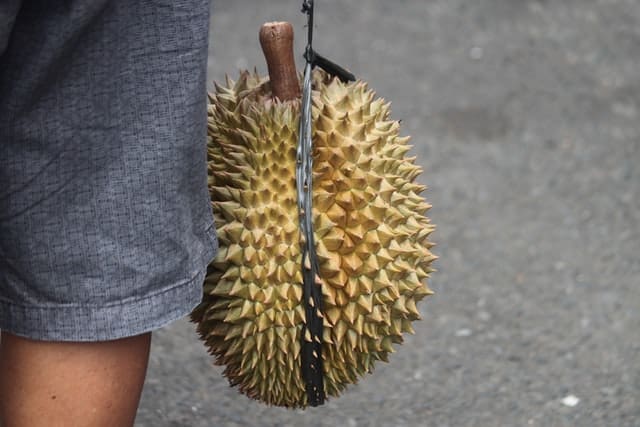 Durian can be eaten raw, but it can also be fried, boiled, and baked. Unripe, salted fruits taste similar to French fries with onions, so it is easier to tempt and try this exotic fruit.

Durian is often served as an accompaniment to meat and accompanied by hot spices. It is also added to soups, but you may also come across marmalades or candies from Durian. Although the taste of Durian is hard to accept and the smell is strongly repulsive, it is worth breaking through. It will be easier for people who like onions and garlic.

It is also worth remembering that not all durians taste the same intensively, depending on the region where they grow. For example, Malaysian durians have the strongest aroma, while Thai durians have a delicate almond and vanilla scent.

Durian spoils very quickly, so it cannot be transported long distances. It is therefore practically unavailable in other regions of the world. Additionally, it is pretty expensive. Depending on their size, Kan Yao durians from Apiranya Farm can range from about $380 to $530 per fruit. But despite Kan Yao’s steep price, demand for this variety is growing. 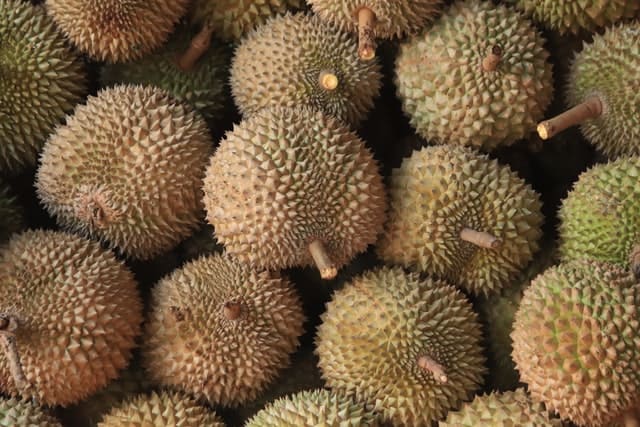 A characteristic feature of this fruit is primarily its smell, or rather stench. It resembles a combination of the smell of rotten meat with old moldy cheese. Additionally, the aroma of Durian is very intense – a stand with Durian can be smelled from tens of meters away!

This fruit weighs approx. 4 kg fruit grows on trees several dozen meters high. While picking the fruit, a falling durian can severely injure or even kill a person under the tree. Cases of death due to durian impact have been reported in Indonesia.

It is also dangerous to open the fruit. Its skin covered with sharp thorns can severely injure the hands. Therefore, when deciding to try this fruit, we should not open it ourselves. At durian stands, the staff touches and peels the durians with special hard gloves to not cut your hands.

When left foiled in the refrigerator for 24 hours, the awful aroma will even reach the milk sealed in the carton! Durian stinks badly enough that you can’t bring it (and especially not eat it) in public places.

You can’t go into hotels, restaurants, public transportation, shopping malls, or airplanes with Durian, among other things. In countries where Durian is a common fruit, you can find unique signs with crossed-out durian fruit. These mark the ban on entering particular places with this fruit.

How does it taste? How to eat Durian? 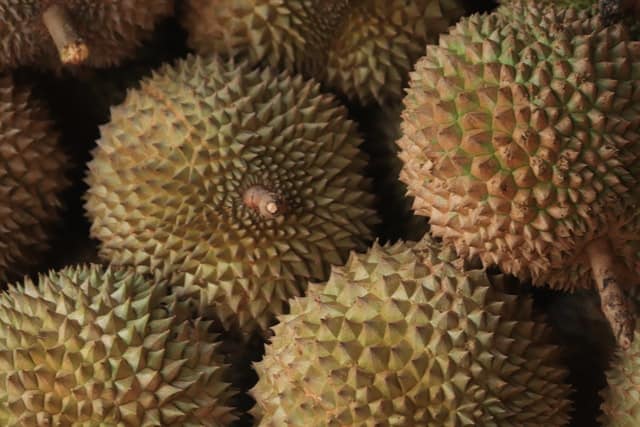 At unique stands, durians are peeled immediately after purchase to be eaten. They are usually split with a machete – then the fruit usually breaks in half. Inside, “pockets” with the flesh are revealed.

The durian fruit is mainly eaten raw by scooping out the meat with a spoon or by gripping it in the palm of the hand. The taste of Durian can be described as raspberries, nuts, or vanilla cheese, while others detect a hint of sweet roasted onions.

In Asia, durian pulp is used to prepare pastes, cocktails, and… ice cream! In addition, Durian is also added to baked goods and candies. It can also be fried or boiled and served as an addition to meat dishes. Durian seeds are also edible. They are fried in oil in Asia and usually served with rice and sugar. The taste is similar to nuts.

In the jungle, it is a delicacy of monkeys, elephants, orangutans, or wild pigs. All because of the odor, which has the opposite effect on animals than on humans because it attracts.

How to eat durian fruit? 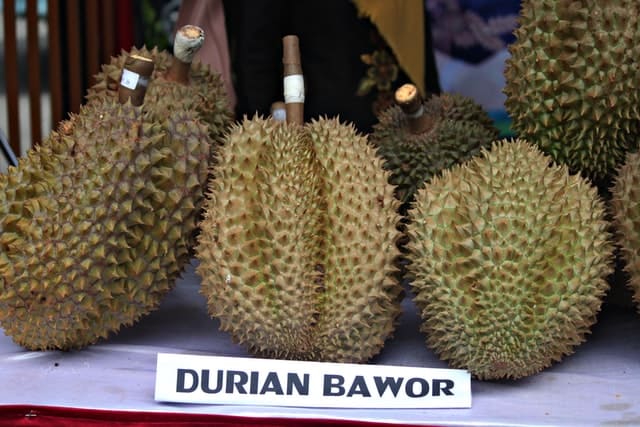 Durian is readily available in Asian countries. You can look for it in Asian produce stores. However, its price can be very high, so try it from local traders if you are in Asia. Durian can be eaten in many ways: raw, fried, baked, or cooked.

The biggest gourmets eat the flesh with a spoon. Seasoned with salt, the taste is similar to French fries. Durian is most often served as an addition to the main dish. It can also be an ingredient in desserts or soups. In stores, you can find candies made of this fruit. Durian should not be consumed in the company of alcohol because it can lead to liver damage.

Other benefits and side effects of Durian

Durian fruits lose their freshness very quickly, so they are usually available in countries that grow on trees. If you have the opportunity to taste this fruit, choose the one prepared with rice and sugar because then its taste will be the nuttiest. 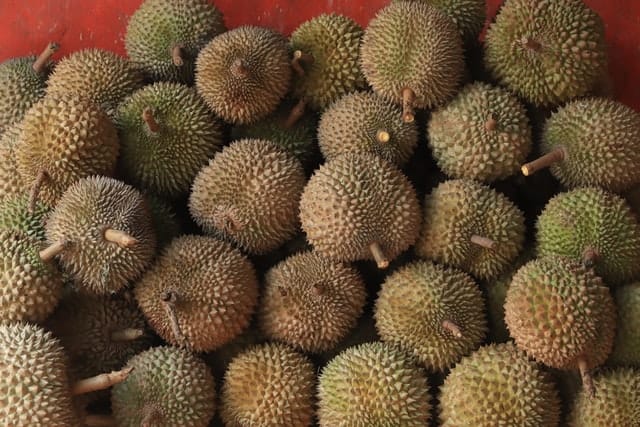 The pros and cons are still developing in the community regarding whether eating durian fruit by pregnant women is allowed. Some say that consuming Durian may increase the risk of miscarriage, while others say that Durian is safe. However, scientific studies on the effects of Durian on pregnant women are still lacking.

So far, it is known that Durian contains a lot of alcohol, gas, and glucose, which are pretty high. The content of Durian can cause discomfort, bloating, and cramps in pregnant women, especially in late pregnancy (third trimester). In addition, the high sugar and alcohol content is not conducive to the healthy development of both mother and fetus.

More scientific research is still needed to see this effect of Durian. For pregnant women who want to continue consuming Durian, it is advisable to control the doctor to get rid of the risk of diabetes. The most important thing is to limit the consumption of Durian, not too much and not too often.

Durian does not raise cholesterol levels

There is a growing myth in our society that consuming Durian can increase cholesterol. The

facts suggest the opposite, that Durian has no cholesterol, or in other words, cholesterol has zero cholesterol. Cholesterol is found in foods that contain saturated fats. Meanwhile, Durian has a weak unsaturated single chain that can lower LDL.

Durian and alcohol are a dangerous combination 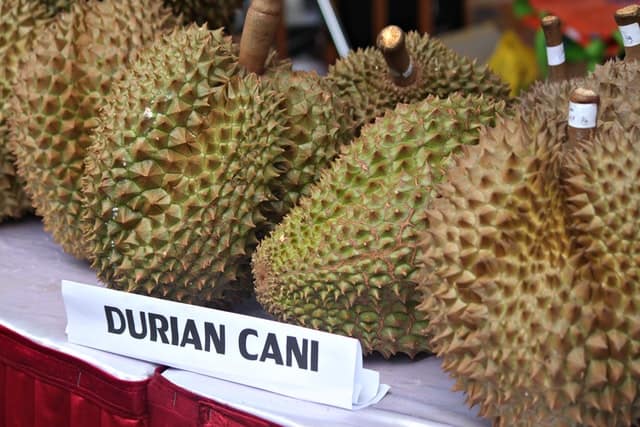 Researchers have observed that the simultaneous consumption of durian fruit and alcoholic beverages can cause serious side effects.

Chief among these are:

In extreme cases, this combination can also lead to death.