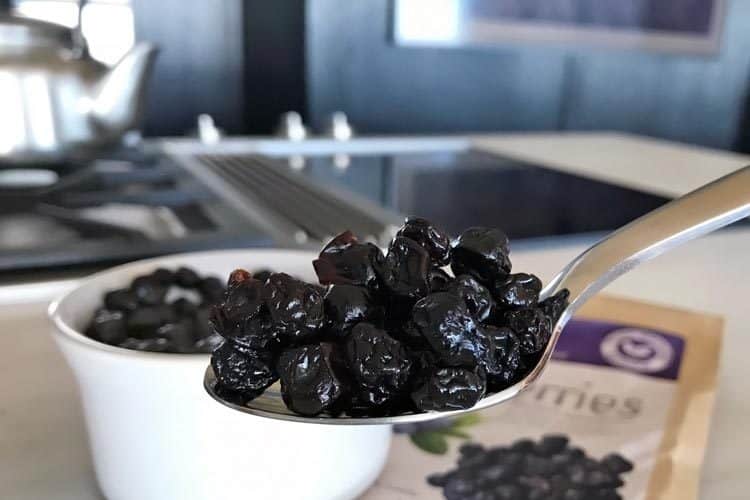 With the exception of June through August, when you’re not completely getting ripped off on this fresh fruit, it can be an expensive superfood to eat year ‘round.

Whether it’s Driscoll’s, Naturipe, or some other supplier, a dry pint of blueberries – which are those small plastic clamshells containing about 2 cups worth – will set you back $5 or $6, when out of season.

Worse yet, at that price they may not even be organic!

Multiply $5 for topping your daily breakfast of oatmeal, hot quinoa flakes (what we use), cereal, or within a smoothie… that equates to nearly $2,000 per year!

There’s got to be a better way.

In addition to frozen, dried blueberries are a worthy option to consider. Particularly for on-the-go snacking and meals. You can make your own healthy bags of berries and nuts to eat at work, school, and during air travel.

That’s something you can’t do with frozen or fresh.

Are dried blueberries good for you?

Whether or not they’re healthy depends on how they’re made. When freeze-dried, the antioxidants, vitamin C, and other phytonutrients are well preserved. They’re as healthy as fresh. If they’re heat treated and have added sugar, they become closer to candy than a fruit. Most brands of dried blueberries will be bad for diabetics because of added sweeteners.

Researchers at The University of New South Wales tested refrigerated fresh vs. frozen vs. drying. The anthocyanin content and antioxidant activity for each was measured.

Using DPPH testing, which is a similar but less sophisticated than ORAC values for measuring antioxidants, the results were as follows: 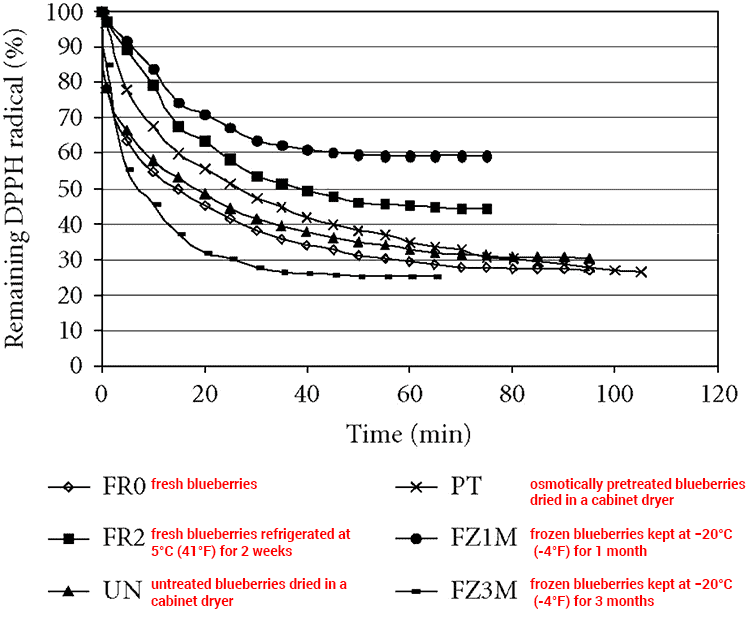 Frozen blueberries have the most antioxidants, even more than freshly picked, but after 3 months in the freezer they have less. Both treated and untreated blueberries dried using a cabinet dryer have antioxidant content comparable to fresh after they’ve been in the refrigerator for 2 weeks.

Two weeks is fairly comparable to the produce you would encounter out-of-season, when it’s shipped from Chile or another South American country.

If you’re curious as to why freezing is often better than fresh, see our piece: Are Frozen Blueberries Healthy?

Note that the above chart reflect a drying process that didn’t reach boiling temperatures, but close at 90°C (194°F). Not an ideal preservation method. (1)

With raw freeze-dried blueberries, the ascorbic acid (vitamin C) content does diminish, though the antioxidant activity “does not differ significantly from that found in fresh fruits.”

Furthermore, with vacuum freeze-drying, which is when it’s made inside of a vacuum chamber versus open atmosphere, the polyphenol preservation is best. (2)

The ORAC value of raw fresh blueberries is 4,669. Good, until you compare them to wild blueberries, which have twice the antioxidants; 9,621 ORAC.

The wild harvested tend to have higher amounts of essential minerals including calcium, magnesium, manganese, and zinc. (3)

Unless you have a local supplier, such as a U-pick patch or farmer’s market, it’s practically impossible to buy the wild. Trader Joe’s and Whole Foods sell the wild frozen, though never fresh.

You can buy organic dried wild blueberries on Amazon and the research suggests that they likely will be more nutritious than the fresh regular kind.

When properly dried and vacuum sealed, blueberries become a shelf-stable food. The bags you can buy at Costco, Aldi, and Walmart typically have expiration dates which are 12-18 months out.

After opening, ideally they should be consumed within a couple weeks. That’s no problem since your typical bag may only have 5-10 servings.

Pour them out instead of reaching your hand inside or inserting a spoon. Both of those actions can introduce bacteria and other microorganisms, which reduces how long they’re good for after opening.

There have been at least 3 human clinical trials which have found consumption of this berry leading to lower blood pressure.

Here are the results of one such study…

In the study of 48 overweight middle-aged women, 8 weeks of eating 22g of freeze-dried blueberry powder daily resulted in both the systolic and diastolic blood pressure dropping. On average, readings went from 138/80 to 131/75. This was a placebo-controlled and double-blinded study.

While there are numerous clinical trials reporting brain-boosting benefits, in 2018 data for the first time was published which demonstrates the mechanism of action. Blueberry consumption enhances the neural response in specific regions of the brain; the left inferior parietal lobule and pre-central gyrus.

In plain English, they helped brain signaling which is highly dependent on blood oxygen levels. 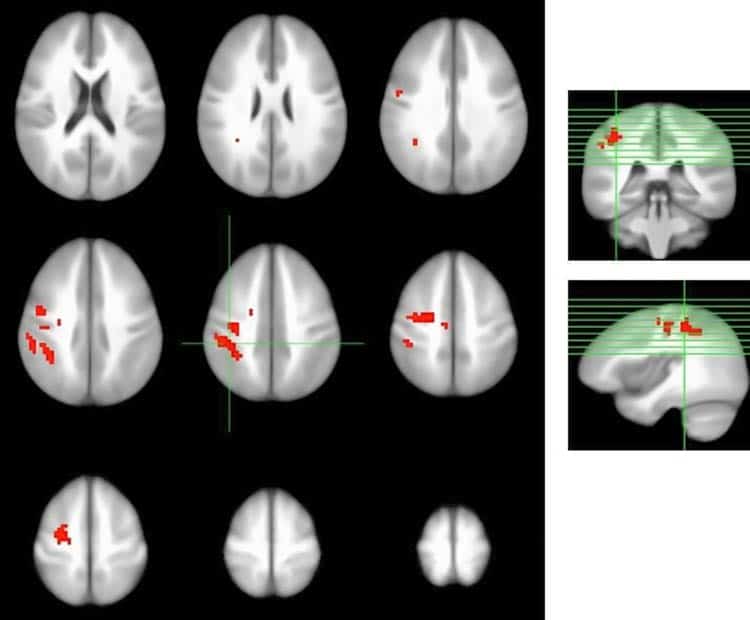 This double-blinded and placebo-controlled study used older adults with “mild cognitive impairment” who were at risk for dementia. (7)

The consumption of flavonoids from this fruit have been linked to improved mood and decreased risk of depression in:

While clinical studies specific to mood have not been conducted in older adults, other studies reporting healthier cognitive performance metrics would likely correlate with a better mood. (8) (9) (10)

Rather than a glass of OJ in the morning, perhaps you (and your kids, if you any) should be eating some dried blueberries or stirring the powder into water.

That’s what researchers did at the University of Reading, in the United Kingdom. A total of 21 children, 7-10 years old, took part in a double-blind study using 15-30g of freeze dried blueberry powder, or a placebo.

“…was found to be significantly faster in comparison to placebo particularly on more cognitively demanding incongruent and high load trials. Trials in which a visual cue alerted participants to the imminent appearance of the target also showed better performance following WBB [dried blueberry] administration. We conclude that WBB administration can enhance executive function during demanding elements of a task…”

Some graphs are easier to understand!

You can see how 1-6 hours after a single dose, performance with 15g (about 1.5 Tbsp) and 30g (about 3 Tbsp) was significantly better than placebo, which are the white bars. (11)

The UK’s Nurses’ Health Study (NHS) is highly cited for many things because of its grand scale; 93,600 women, who are all nurses, were and are being followed for multiple decades.

Among those who ate lots of anthocyanins, which blueberries are a major source of in the Western diet, there was a 32% lower risk of heart attacks. (12)

Type 2 diabetics, as well as those with long term obesity close to getting the disease, have impaired insulin sensitivity. Meaning, the cells in their body become resistant to the insulin hormone. This results in higher blood sugar levels.

As published in the prestigious Journal of Nutrition, researchers at Louisiana State University did a clinical study using 32 obese pre-diabetics.

Twice daily for 6 weeks, they consumed 22.5g (about 2 Tbsp) of freeze-dried whole blueberry powder, or a smoothie of equal nutritional value which served as a placebo (it didn’t contain the berry). 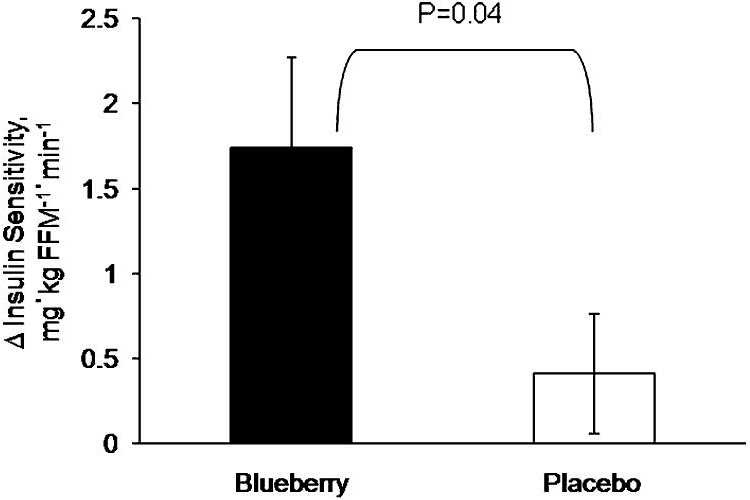 On average, insulin sensitivity improved significantly more than what the placebo group experienced. (13)

Roughly half the sugar in blueberries is in the form of fructose. The other half is glucose. That fact, combined with the fiber content, makes it a slower digesting carb relative to processed sugar and most sweeteners.

The catch is that blueberries dried will have a higher concentration of sugar, given that most of the water weight is removed.

The conversion is 1 cup fresh = ¼ cup dried. That’s for sun or air-dried blueberries. For freeze-dried, even more water is removed (almost all) and that ratio will be closer to 1 cup fresh = 1/8 cup dried.

To keep them a low GI food, just eat a serving of 1-3 tablespoons.

If sugar is added, which is common with Costco dried blueberries (Kirkland) and similar brands, then they may be a high glycemic food. Even if you eat just one serving. The same holds true for eating many unsweetened dried or fresh blueberries. (16) 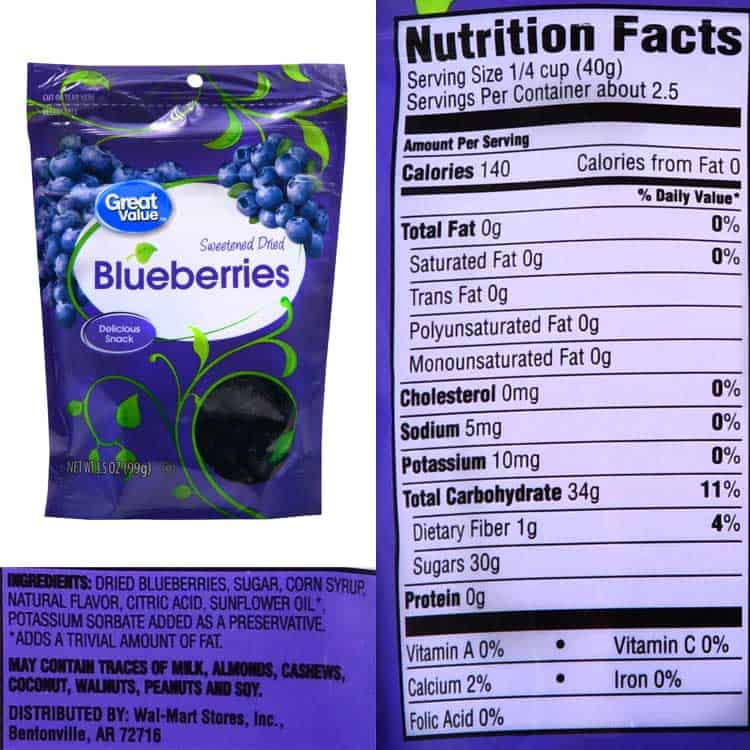 Great Value Walmart dried blueberries contain 140 calories per ¼ cup and that comes with 30g of sugar. This is because they sweeten it with added sugar and corn syrup.

For something more natural, here is an example: 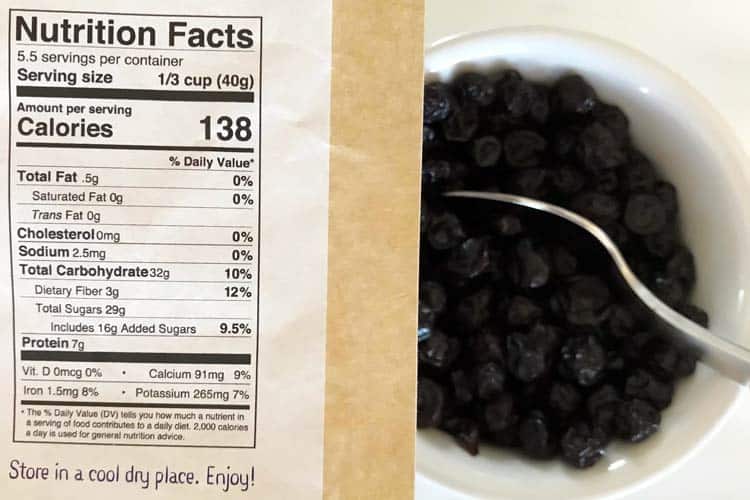 While not organic, Wilderness Poets are Oregon-grown blueberries which are dried at low temperatures to better preserve the phytonutrients. They are sweetened with apple juice instead of adding processed sugars. There is a trivial amount of sunflower oil added which is common with dried fruit. It’s used to prevent them from sticking together. One serving only contains a 0.5g of fat (4.5 calories worth) so very little oil is added.

You can see how on the nutrition facts label, out of the 29g of sugar, 16g comes from the apple juice. If you subtract that, dried blueberries will have 13g of sugar per 1/3 cup.

Blueberries are among the most common dried fruits for sale. You can find them sold at traditional grocers like Kroger, Target, Walmart, and so forth. The drawback is that they almost always sell them with added sugar.

Even at Whole Foods in Los Angeles, we were unable to find any without sugar that’s added.

Dried blueberries with no sugar added will be the healthiest. Unfortunately, even the wild-harvested and organic premium brands still tend to add sugar through the use of apple juice. Healthier but still not ideal.

For those which truly have no added sugars of any kind, we have only found them online.

A great choice is the Michigan-based Brownwood Acres brand. They only sell what they grow. On Amazon, you can buy in bulk and get three 1 lb bag of unsweetened blueberries for a good price. We have bought their unsweetened cherries and recommend those as well.