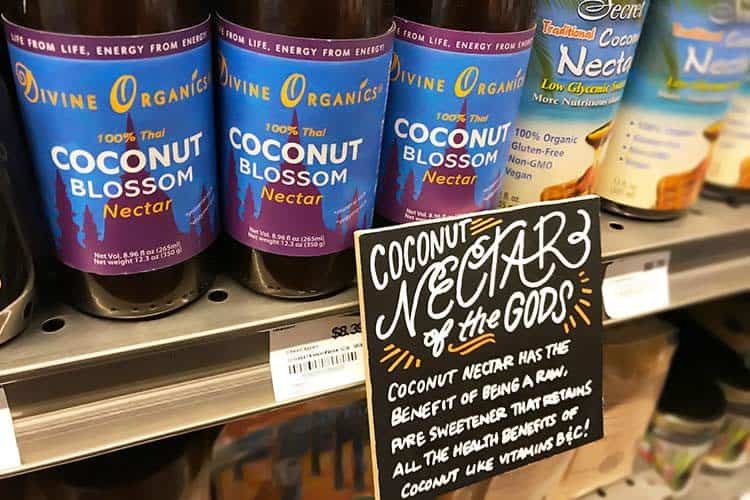 Several years ago, Dr. Oz featured coconut sugar on his show and said it was “a nutritious natural sweetener” that is “low glycemic.” Now to be clear, he was telling the truth based on the data he had.

However since then, major issues have been raised about the old test from the Philippines, that presumably he and everyone else was referencing for their opinion.

Using modern and accurate testing, when you compare cane sugar vs. coconut sugar, you discover that it “was certainly not 35” for the GI value of the latter, according to The Sydney University Glycemic Index Research Service (SUGiRS). Dr. Oz never cited that number specifically, but 35 is what many food manufacturers and those in the media still claim to this very day.

Before you spend your hard-earned money on this other coconut sweetener which you may think is healthier, make sure you know the facts.

What is coconut nectar?

Also known as coconut blossom nectar, this liquid sweetener is made from the flower sap of the tree. Before the coconuts form, their thick flowering stems are tapped similar to how maple syrup is made. After this nectar is collected, it’s thickened up using partial evaporation to produce a syrup.

It is fat-free since there’s no coconut oil in it. Though if you are under the assumption the nectar is sugar free, you are gravely mistaken. 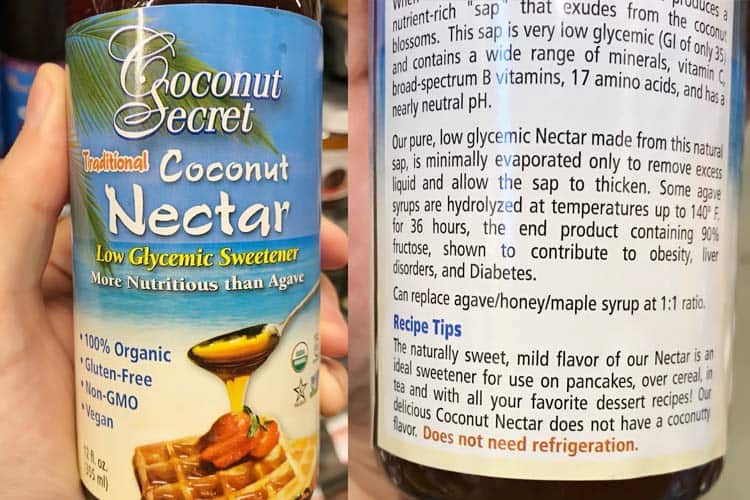 The coconut nectar to sugar ratio can vary greatly depending on how much moisture is left in the syrup. When there’s more water, it means less sugar content per teaspoon and vice-versa. To a lesser extent, the time of year it’s harvested also affects the content.

If using nectar instead of regular sugar, here are the conversion ratios for several popular brands if you want to achieve the same taste of sweetness.

That last one is sold at Holland and Barrett in the UK, where they report the data per 100g.

If you compare the labels of coconut nectar vs. coconut sugar, you will see the calorie count is equal or higher for the liquid. 15 calories and 4g of sugar per teaspoon is what Nutiva’s coconut sugar measures.

The liquid sweeteners may seem like they have higher calories and sugar content, but that has a lot to do with their weight (and density) on a spoon. You can make powder perfectly level, doing so with a thick liquid syrup is near impossible.

With perks like, you’re probably ready to buy some right this very moment!

Those benefits listed we sourced from the blog of 22 Days Nutrition, which is a vegan meal delivery service most known for its link to Beyoncé. We did that intentionally to show you how the health claims made by others are technically true, but they are really providing you a skewed representation.

The following is what you will find on the label for Coconut Secret. For many years it was marketed as organic raw coconut nectar, however in 2017 they announced that due to quality control issues they will pasteurize it and in turn, the bottles now say “traditional” instead of raw.

The problems with the perks

Vitamins and minerals are in minuscule amounts. Divine Organics coconut blossom sugar provides 1% of your daily value for calcium and iron per serving. Coconut Secret only lists 121 mg (3% of DV) for potassium. B vitamins measure so small they are reported as 0% with most brands. Vitamin C (ascorbic acid) is similar and for the non-raw brands, even that tiny amount will get largely destroyed during the heat of pasteurization.

Amino acids are another name for protein. As you see from the nutrition facts, there are zero grams of protein per serving. Sure there are trace amounts of up to 17 amino acids, but the amounts are so trivial they don’t really matter for nutrition.

Sucrose vs. fructose is a debatable advantage. After you eat sucrose it’s quickly separated into glucose and fructose. 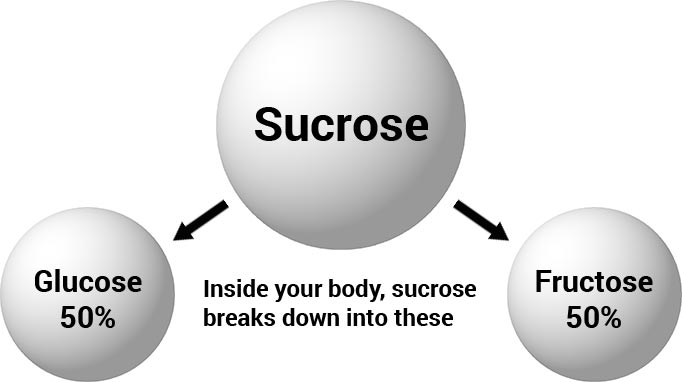 Now it is true that if you eat fructose, it’s processed by the liver. Sucrose gets absorbed in the small intestines.

It’s also true that the alarming rates of non-alcoholic fatty liver disease (NAFLD) probably have something to do with too much fructose in our diets. (3)

However you can’t pigeonhole these sweet molecules into “bad for you” and “good for you” categories. There are pros and cons for each. One isn’t necessarily better than the other. The key is to consume sugars seldom and in small amounts, regardless of type.

Then we come to the elephant in the room…

What is the glycemic index?

Coconut Secret says the nectar has a GI of 35, Big Tree Farms only says its “low-glycemic verified” and the brand Wholesome is silent on the topic altogether. If the value is 35 it would qualify as a low GI food, however the only brand reporting that number doesn’t provide the source.

It’s interesting to note that Coconut Secrets also claims their coconut sugar (which they market as crystals) has a GI of 35 too, even though that number has since been discredited by newer testing.

One has to wonder if they actually conducted testing for their syrup? Or are they just citing that same 35 number that has been floating around for ages? The University of Sydney maintains the most extensive and continuously updated online database of GI values. They don’t have an entry for coconut syrup, nectar, or anything with a similar name.

That may surprise you but as they point out, testing GI values is more complicated than many people realize.

It requires 10+ healthy (non-diabetic) individuals who must fast, then eat a carefully measured quantity of the food, and then have their blood glucose levels measured for 2 hours after. Participants have to be recruited (and presumably paid) along with the research service. It’s not a cheap or easy test. (4)

That’s why there aren’t GI values for even more popular sweeteners, like yacon syrup, which is another one that was featured on Dr. Oz years ago. The purported superfood sweetener known as jaggery hasn’t been tested either.

Food manufacturers and marketers rarely bother to pay for proper testing like they should and instead, they seem to make glycemic claims based on little more than word of mouth info… which may or may not be accurate.

Unlike whole fruits which have fiber to slow their digestion, coconut blossom nectar is a refined sugar. It has been filtered, partially evaporated, and possibly pasteurized. It’s not Paleo and the Whole 30 diet categorizes it the same as other refined sweeteners.

The claimed benefits of coconut nectar vs. honey, maple syrup, etc. are still up for debate. There is not enough published research on coconut palm sugar and/or nectar to say whether either is better or worse for you than those other, more common sweeteners.

Is agave better than coconut nectar? 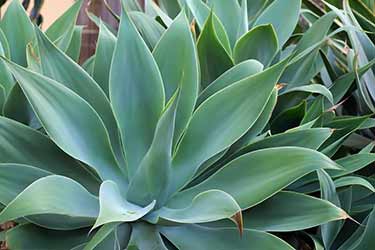 Probably not. The reason agave has a low GI value is because it’s almost entirely made of fructose (90% or more). The glycemic index only evaluates the glucose in food, not the fructose which is processed by the liver instead of the small intestines.

Even though agave syrup has a low GI, it’s probably one of the least healthy sweeteners since it takes a significant toll on the liver for digestion. That may contribute to fatty liver disease.

What about blackstrap molasses?

This is just one type of molasses. It’s made from the dark leftover liquid after cane or beet sugar has been crystallized. Manufacturers have not published any glycemic index or load values, but other research suggests that the GI value of molasses runs 5-20% lower than the more refined granulated white sugars. (11)

Since there has not been formal testing on how it is metabolized, one can only make assumptions and not definitive answers.

The research does suggest that using coconut nectar may be good for diabetics and non-diabetics, relative to more refined white sugar. This advantage is probably small. Based on the GI value of coconut palm sugar, we know that its only fractionally better at 54 versus 60 for normal refined sugar. 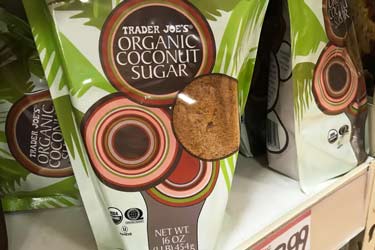 Trader Joe’s does sell organic coconut sugar, but no nectar or syrup

You can find nectar made from coconuts for sale at Whole Foods and similar stores. Warehouse clubs like Costco and discount grocers like Trader Joe’s and Aldi don’t sell coconut nectar.

It doesn’t require refrigeration so you can easily buy it online. Though if you are going to out of your way to get it, you might as well get a healthier substitute.

Monk fruit will be the best option, as it’s a zero glycemic and zero calorie sweetener like stevia, yet it doesn’t have the bad after taste or side effects.

If you want a “real” sugar then your best bet will be date sugar, which is basically dried dates that are ground into a powder. Measured GI values for it, using both healthy and type 2 diabetics, have come back at 43 to 55. The other advantage it offers is more antioxidant content. (12)

Unfortunately finding it in-store can be a challenge, even when shopping at specialty health food stores. For buying it online, this bag on Amazon is what we use ourselves.

These statements have not been evaluated by the Food and Drug Administration. This product is not intended to diagnose, treat, cure, or prevent any disease.
517
SHARES
FacebookTwitter