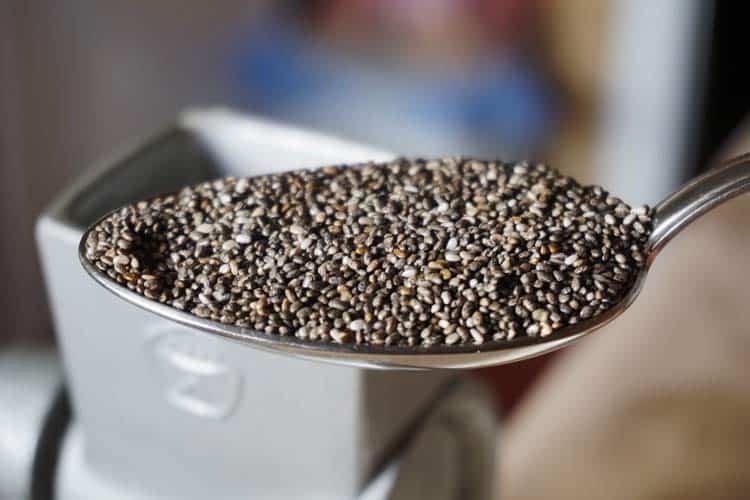 Can you be allergic to chia seeds?

Yes. Although rare, you can have an allergy to chia seeds (Salvia hispanica). Possible symptoms include rash/dermatitis and anaphylaxis. More common is being intolerant. That’s due to their high fiber content and expansion in volume upon contact with moisture; up to 27x in size.

You can read about this seed intolerance in our analysis of chia benefits and side effects.

Similar to being allergic to hemp seeds, it’s very possible (and even likely) it’s a grossly under-diagnosed condition with chia.

While it’s true that both have been consumed for many centuries by humans, historically that has been among the indigenous people of the Americas. The Mayans and Aztecs used it for both food and herbal medicine.

It’s only with the superfood trend this century, whereas these tiny seeds have gone mainstream. As such, there’s not much medical data on them like there is for common tree nuts, peanuts, and other major allergens.

Antibodies are a blood protein, which we produce in response to a specific antigen (such as an allergen). Very little research has been done on those from S. hispanica reactions – i.e. the immunoglobulin G (IgG) and immunoglobulin E (IgE) binding proteins.

The storage proteins (potential allergens) in the plant have been identified and they include (1):

The best way to find out if you’re allergic to chia seeds would be to test for the specific storage proteins identified in the plant. Since no off-the-shelf test exists, the most feasible option is skin-prick testing. Although less accurate, it is a test which any qualified allergist or specialized dermatologists can create with the seeds.

With more than 30 million entries, the US government’s PubMed database is the most comprehensive resource for peer-reviewed medical literature. For even the most obscure topics, you will find a lot.

However when it comes to chia, there’s almost no research out there: 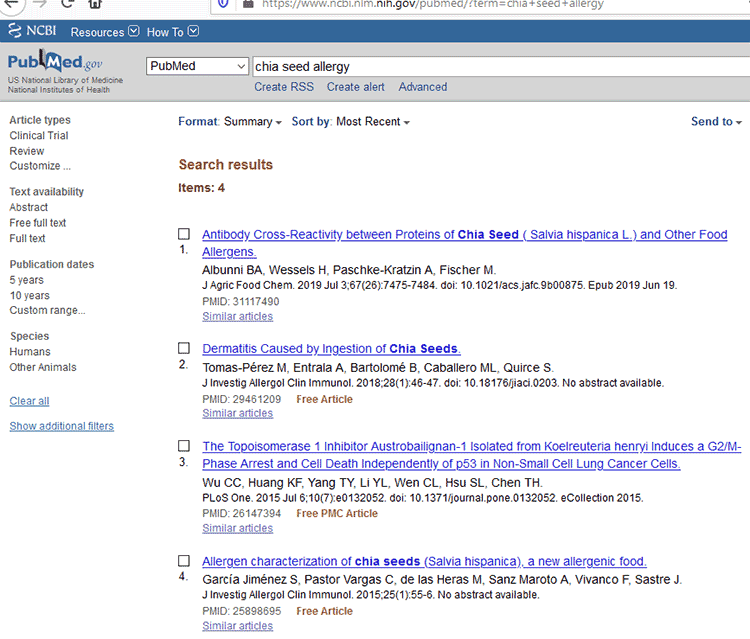 The first was not even published until 2015. There’s only one patient case study of a chia seed allergy, where dermatitis was the side effect. (2)

Since allergy testing for Salvia hispanica is not readily available, the next best thing is to focus on the foods which may have cross reactivity.

The University of Hamburg in Germany published data in 2019 demonstrating that the IGE binding proteins were similar to those found in sesame seeds and hazelnuts. Since those are common foods, tests are easy to come by. (3)

You’re probably familiar with the top 8 allergens. Though most are surprised to hear what #9 on the list is. It’s sesame.

If you have a sesame seed allergy, it would be prudent to also avoid chia seeds. It is possible to be allergic to one and not the other, but only testing can distinguish that. Even if you experience obvious side effects with sesame but none with chia, it’s possible you may still be getting a reaction albeit milder. Low grade inflammation and other side effects may be lurking, yet not pinpointed.

One of us here at Superfoodly is allergic to sesame and as a result, tries to avoid chia as a precaution. A good alternative he likes which is very allergy-friendly and high-protein is watermelon seeds, but without the shell so they’re easy to digest. On Amazon, these are the ones he buys and eats almost daily.