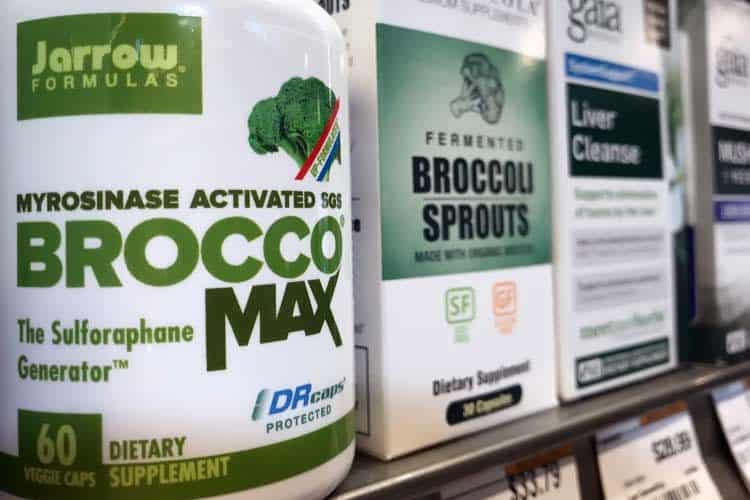 As a youngin, your mom may have muttered to eat your broccoli.

Though let’s be honest, she probably didn’t provide a very compelling reason as to why. Sure, she said it’s a vegetable, but so are Tator Tots!

Only recently have scientists uncovered the most compelling reasons as to why we should eat it.

Broccoli, Brussels sprouts, kale, and other cruciferous vegetables contain glucosinolates. These are sulfur-containing compounds that give them the pungent taste which some people like, but many seem to hate.

When these glucosinolates are digested, they get broken down into:

Sulforaphane (an isothiocyanate) and indole-3-carbinol (an indole) have shown anti-cancer effects in a plethora of research. (1)

Per the words of Cancer.gov, which is the website for the U.S. government’s National Cancer Institute:

“Indoles and isothiocyanates have been found to inhibit the development of cancer in several organs in rats and mice, including the bladder, breast, colon, liver, lung, and stomach. Studies in animals and experiments with cells grown in the laboratory have identified several potential ways in which these compounds may help prevent cancer…” 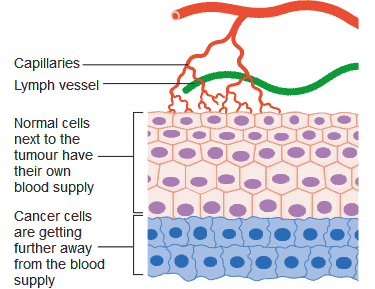 Without angiogenesis, a tumor cannot get blood supply to grow

The potential reasons they cite include:

On that last reason, they don’t provide details as to exactly what they are referencing, but presumably it’s the science out there about the observed antiglycation effects of sinigrin and other glucosinolates in cruciferous vegetables like broccoli. (2)

Advanced glycation end products, which are suspected carcinogens, get created during the cooking of both white and red meats. Compounds in cruciferous plants and the antioxidant known as L carnosine are theorized to reduce the effects of these glycotoxins.

Other fruits and veggies get buzz in the media for having alleged anti-cancer activity, too. So how does broccoli compare to the rest?

The below chart shows the anti-proliferative effects of a couple dozen veggies on cultured lung cancer cells. All of the cruciferous ones are highlighted in yellow. 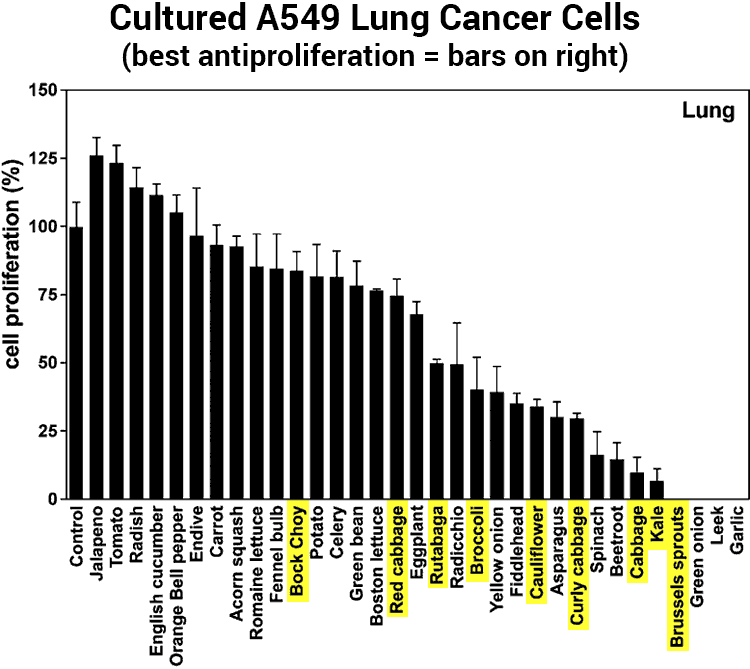 You see broccoli over to the right, demonstrating around a 60% inhibition of the cell proliferation in this experiment.

That’s fairly good, but the sprouts are where it gets really interesting…

Broccoli sprouts are the seeds 3-4 days after germination. They taste similar to radishes but look more like alfalfa sprouts.

In 1997, research from the Johns Hopkins University School of Medicine found that broccoli sprouts contain 10 to 100 times more glucoraphanin than regular broccoli which is mature.

The difference between glucoraphanin and sulforaphane (which is used in some supplements) is that the latter is a byproduct created from glucoraphanin. (3)

When we eat plants containing glucoraphanin, an enzyme in them known as myrosinase transforms it into two different things:

Raphanin – This is a sulfuric compound that has antibacterial, antifungal, and antiviral activity. These effects have been known for well over 50 years, though it has never been developed/pursued for use as a medical antibiotic or antiviral treatment. (4) (5)

Sulforaphane – This is the main compound believed to be responsible for the apparent cancer benefits seen in lab experiments and animal studies. 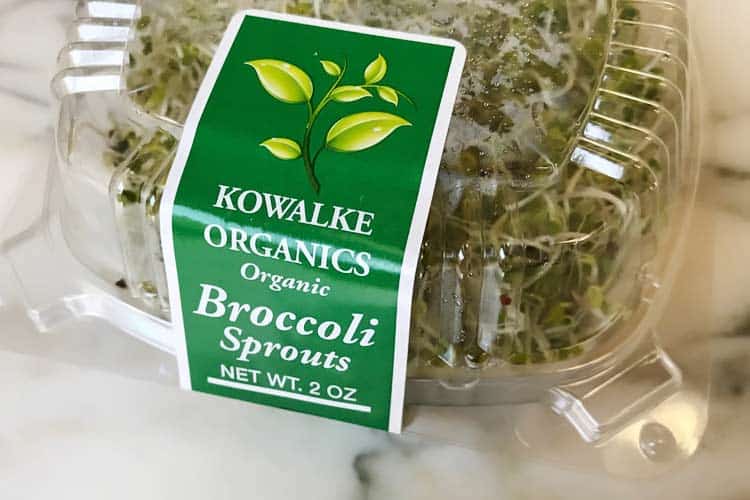 Sprouted alfalfa, clover, and radish seeds are easy to find for sale. Not so with broccoli seeds.

In that earliest study out of John Hopkins University, they measured how the fresh sprouts and regular mature cruciferous foods – like broccoli, cauliflower, and cabbage – induced what are known as phase 2 detoxification enzymes:

In plain English, these are naturally occurring enzymes in our bodies that help fight against the formation of cancer. Cruciferous veggies are theorized to spur our bodies to produce more of these enzymes. 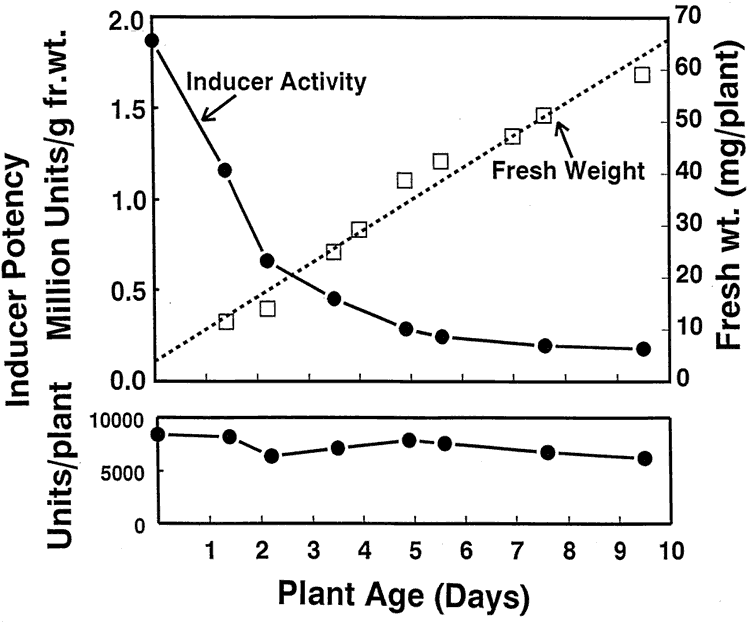 Using cultured liver cancer cells derived from mice (hepa 1c1c7 cell line), the above chart shows how extracts of broccoli sprouts versus fresh broccoli compared in spurring the formation of the protective enzymes. You can see how the production of these enzymes (inducer activity) goes down as the plant grows older.

No. To be clear, so far the health benefits of sulforaphane from broccoli and/or sprouts have only been measured in lab experiments and animal studies. Broccoli supplements of any kind are not a preventive method, treatment, or cure for any type of cancer. There is too little research to know what effect, if any, the sulforaphane and similar compounds have in humans with cancer.

While no human studies have taken place, there is peer-reviewed empirical data which has looked at how the consumption of cruciferous vegetables correlates with rates of certain cancers.

Not all, but some studies on populations in the United States, Europe, and the Netherlands have suggested lower rates of prostate cancer, colon cancer, lung cancer, and breast cancer for people who ate more of these vegetables. However, there are not enough data sets for these observations to be conclusive. (6) (7) (8) (9) (10) (11)

The benefits of using broccoli sprout extract for autism are unknown. This theorized benefit is a newer discovery, based on an 18-week human study that was published in 2014. Out of the 37 boys and young men with autism who participated, 46% were said to have “significant improvements” in social interaction, 42% in verbal communication, and 54% had a decrease in abnormal behaviors. (12)

Currently, there are a total of six phase 1 and phase 2 trials involving sulforaphane capsules and autism on ClinicalTrials.gov.

Only the results of one trial have been published, which is the one from 2014. The others are recruiting or active.

The institutions involved in these trials are MassGeneral Hospital for Children, University of Massachusetts Medical School, Rutgers University, Guangzhou Huiai Hospital (China), and the University of North Carolina School of Medicine. (13)

Since the effects (if any) on autism are not a matter of life and death, as is the case with cancer treatment for humans, most likely, this subject will continue to have more human research published. It’s very hard and risky to research potential treatments for cancer, since the stakes are so high for when something doesn’t work.

Raw broccoli is a good source of vitamin C, vitamin K, vitamin A, folate, and the essential minerals manganese and potassium. Aside from these essential nutrients, there are no proven health benefits of broccoli sprouts or sulforaphane supplements. They should not be used for any disease.

With that made clear, what is the best sulforaphane supplement for use as a dietary supplement?

There are many brands of supplements you can buy:

There are also generic versions by Vitacost and Swanson, as well as a handful of lesser-known brands.

With so many options, how are you supposed to choose?

How much sulforaphane there is in the seeds appears to be high, however they have less research on them. The bioavailability of seeds may differ versus sprouts. Sprouting is known for making many phytonutrients easier to digest.

Heat actually destroys the myrosinase enzyme in cruciferous plants, which is needed to make the sulforaphane. Grinding seeds into powder to make them more bioavailable could backfire, due to the heat generated. The destructive heat is also why cooked broccoli isn’t as good for you, at least relative to the raw form. (14) (15)

That narrows down your list to the supplements of broccoli sprouts, like BroccoMax, and other competitors like Source Naturals and Dr. Mercola. How do you choose between these?

Here’s a review of what’s inside of the Dr. Mercola broccoli supplement… 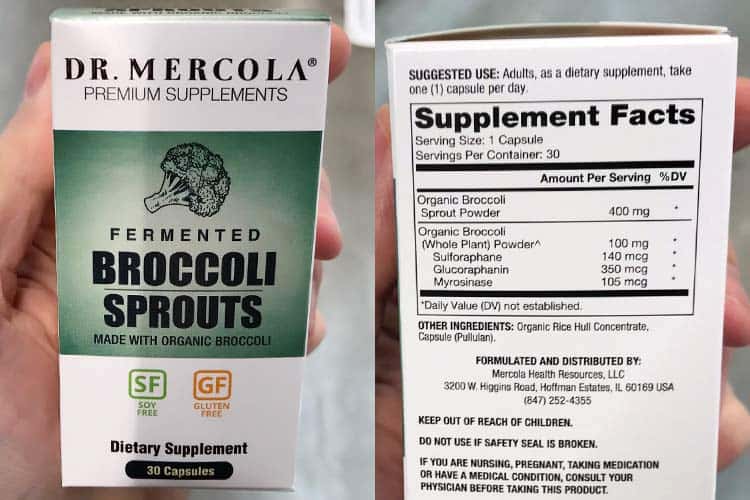 A review of Broccomax shows you its ingredients are different than Dr. Mercola, Source Naturals, Solaray, and other brands of broccoli sprout extract. 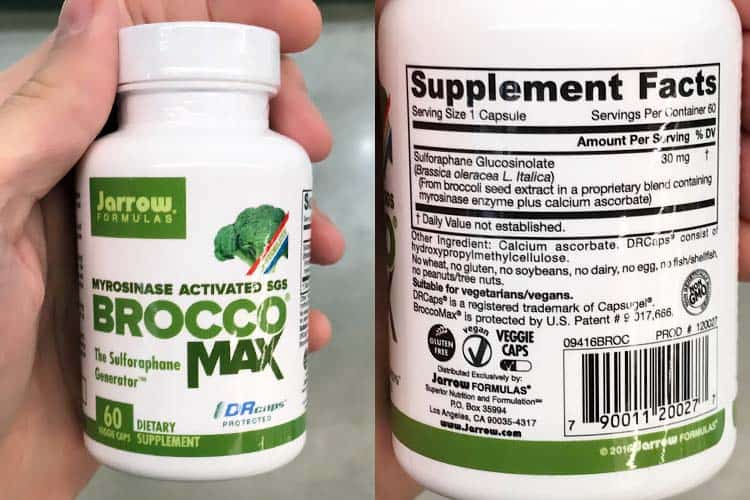 Why such a disparity? You will notice on the Broccomax bottle it says:

If you look at that patent filing, here’s how the field of the invention is described:

This patent is assigned to Jarrow Formulas, Inc. That means only they can manufacture it, unless they choose to license the technology to other supplement companies. Perhaps they will do that in future, like how Kaneka sells their ubiquinol form of CoQ10 to Qunol and other brands.

However as of now, Jarrow is choosing to only sell their sulforaphane supplements under their brand name. We wouldn’t expect that to change anytime soon either, because the priority date of their patent is June 5, 2012. That means the patent doesn’t expire until June 5, 2032. (16)

Jarrow’s marketing claims state that their product “assists in cell replication and liver health” though to reiterate, it’s for use as a dietary supplement only.

Because Broccomax is made using a proprietary technology that offers higher sulforaphane content, it’s the best broccoli sprouts supplement you can buy. It also is the easiest to find for sale at vitamin stores and some specialty grocers.

The photo at the top of this review was taken at Erewhon, which is a health-oriented grocer in Los Angeles. Their price was very high compared to numerous online retailers we checked, at least as of the date this review.

On Amazon, you can buy Broccomax in a 60 count or 120 count bottle.

The most compelling reason to eat cruciferous vegetables are not for general antioxidant activity. It’s their glucosinolates, as those are not found in any other food.

Supplements of broccoli sprouts are not proven to work for anything. However, it is a straightforward conclusion to state they work better for supplying glucosinolates in your diet versus eating whole, mature vegetables.

Broccoli sprouts contain 10-100x more than eating comparable weights of raw broccoli. Cooked broccoli will be the worst form, since heat destroys the enzyme responsible for converting glucosinolates into the compounds believed to be beneficial.

There are challenges of eating large amounts of raw broccoli or its sprouted seeds on a regular basis. Limited availability, compounded with undesirable side effects like gas and bloating, make daily consumption of whole food sources difficult for many people. This is why there’s a good case to be made for broccoli supplements belonging in your daily regimen.
These statements have not been evaluated by the Food and Drug Administration. This product is not intended to diagnose, treat, cure, or prevent any disease.