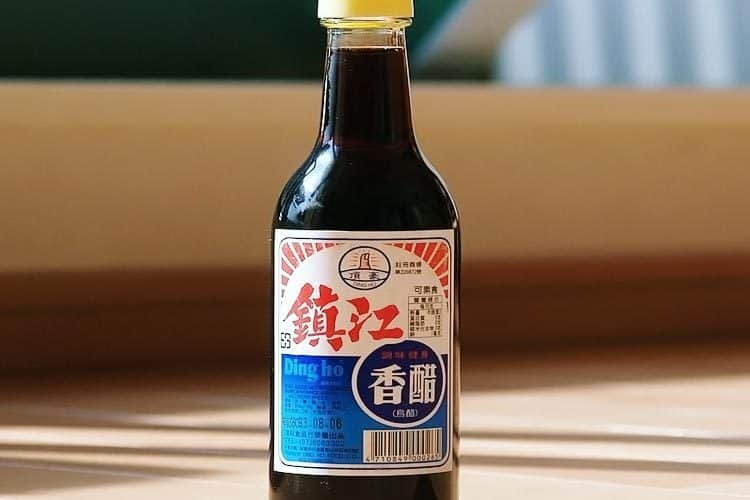 Admittedly there isn’t a great deal of formal research on them, but the advantages of apple cider vinegar are well-known. Unlike flavor-of-the-week superfoods, that trusty bottle of Bragg has remained a household staple for decades among health food connoisseurs.

Well at least, that’s here in the US and Canada. To a lesser extent, in the UK and Europe too.

In many Asian countries, it’s a different type of vinegar which holds superstar status. According to The Japan Times, black rice vinegar accounts for over 20% of the market their country. (1)

What is black vinegar?

Chinese black vinegar is made by fermenting glutinous rice and usually a malt grain, like wheat or barley. Sometimes sorghum or millet is added. Aged for several years or longer, it develops a complex flavor that’s fruity (but less sweet than balsamic), smoky, and has a hint of umami. In addition to yeast, a unique mold is used for the fermentation process; Aspergillus oryzae. It’s commonly called chinkiang vinegar.

Unlike the Chinese version, Japanese black vinegar is always made from glutinous rice, without other grains. Compared to regular rice vinegar, the black tastes milder and less sour. It has hints of smoke and umami. It’s fermented with Aspergillus oryzae, just like Chinese chinkiang vinegar. In Japan they call it kurozu. Brown rice vinegar is another name for it because technically, it’s not black.

Glutinous rice is another name for sticky rice. Despite the similar sounding name, it should not be confused with gluten. When black vinegar is made with only glutinous rice, it will be gluten free.

In short, the Japanese is made with glutinous rice, while the Chinese uses that plus other grains. Both are fermented with Aspergillus oryzae.

Humans have been fermenting since the earliest days of written history. However the vinegars, wines, and foods made with the Aspergillus oryzae species only date back to around 300 BC. That’s when it was mentioned in the Chinese manuscript Zhouli (Rites of the Zhou dynasty).

You may not recognize the scientific name of that species. The English word for it is better known; koji.

This microorganism is what makes black vinegar different than ACV, balsamic, red wine, rice, and other common vinegars. Its fermentation creates byproducts and a chemical constituent profile you don’t see in other types.

Koji is also used in the brewing of sake, fermented bean paste, and miso.

Many of the purported medicinal uses of black vinegar, and the reasons for it being healthy, are directly due to the inclusion of koji in its fermentation.

Within the first couple centuries AD, fermented foods made with koji became staples in China. This is evidenced by literature of the era, including being detailed in chapter 69 of the Shiji (Records of the Historian) which was published 90 BC. Fermented soybeans were first, quickly followed by vinegar and wine. Koji made its way to Japan around 800 AD. (2)

With the exception of the basic nutrition facts, there is not sufficient research to prove the following benefits. Rather, they are uses for black rice vinegar which are claimed in Chinese and Japanese culture and/or what scientists are studying it for.

Granted, that number has been rounded. Though regardless of which country’s English label you reference, all report black vinegar as being less than 10 calories per tablespoon.

All dietary amino acids are 4 calories per gram. The US nutrition label lists “<1g” for the protein content in aged black vinegar. If you turn to the same Gold Plum bottle sold in France, the label is more detailed by law. It lists 0.61g of protein per 15 mL (or 15g) serving. 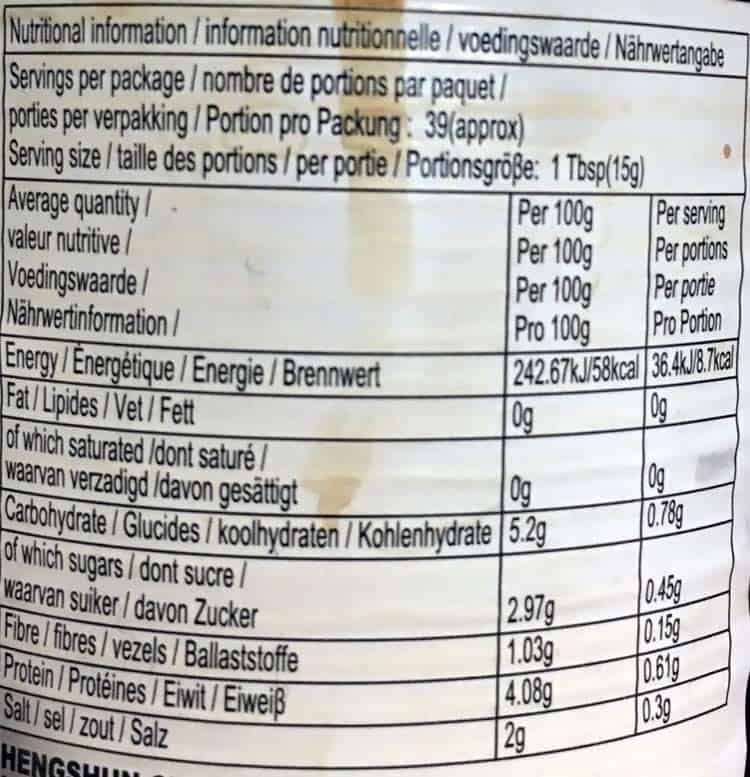 Based on the 8.7 calories they’re claiming, that means about 30% are in the form of protein.

Color aside, black vinegar is not the same as balsamic vinegar. The latter is made with grape must, not rice. Different yeast is used. This results in significantly higher sugar content. There’s about 2.5g per tablespoon of balsamic. With only 0.5g for the same serving size, Chinese black vinegar has about 75% less sugar.

Zero calories come from fat. That’s because the lipase enzymes, which are created through the fermentation with koji, eat the fats and turn them into other compounds.

The French label lists 0.3g per serving. The US label lists 110 mg of sodium per 1 Tbsp of Gold Plum Chinkiang vinegar.

Not ideal, but it looks innocent in comparison to the typical soy sauce; 879 mg per Tbsp according to the USDA National Nutrient Database. (3)

Black vinegar won’t be a good source of essential minerals simply because you’re eating a small amount. On a relative basis of concentration, the amounts in 100g dried (minus the water) reveals that it’s rich in magnesium, potassium, manganese, and iron. (4)

No type of vinegar is high in antioxidants. That which is infused with black truffle or rosemary essential oil tests the highest, which is not surprising. (5)

When you look at regular vinegars, they have some antioxidants but not a lot.

Apple cider vinegar has an ORAC value of 564 for 100g (3.5 ounces worth). To put that in perspective, even plain ol’ tomato ketchup is basically the same at 578.

The ORAC value for chinkiang and Japanese black rice vinegar has not been reported in any published scientific research. What have been reported are the types of antioxidants there are in dried black vinegar powder. (4)

Even though aged black vinegar isn’t high in antioxidants, it may offer something better; boosting the body’s internal production of superoxide dismutase and catalase.

These are two antioxidants which are exponentially more powerful than any you can get from diet. Not even CoQ10 or astaxanthin can compete.

Tetramethylpyrazine (TMP) is a naturally occurring chemical found in fermented foods, including natto and black rice vinegar. The more it’s aged, the higher the TMP tends to be.

In the lab using cultured HepG2 human cancer cells, exposure to TMP ramped up their production of superoxide dismutase (SOD) and catalase (CAT) in a dose-dependent manner. (6) 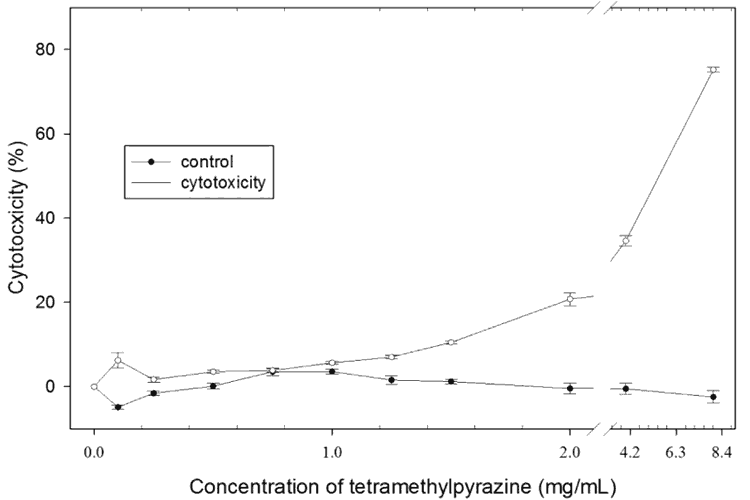 At a concentration of only 1.5 mg/mL, which equates to 1,500 parts per million, TMP has been found to be cytotoxic to cultured human liver cancer cells. You can see in the graph how at a dosage of 8.4 mg/mL (8,400 PPM) the cytotoxicity reaches nearly 80%.

To reiterate, this is just preliminary lab research. What happens in well plates doesn’t mean it happens in a human body, or that high concentrations are safe for healthy cells. (6)

In Traditional Chinese Medicine (TCM) the tetramethylpyrazine has been used for various cardiovascular diseases, such as high blood pressure and atherosclerosis. (7)

While many of the black vinegar uses have not been formally studied, there is research to suggest this liquid can support heart health. 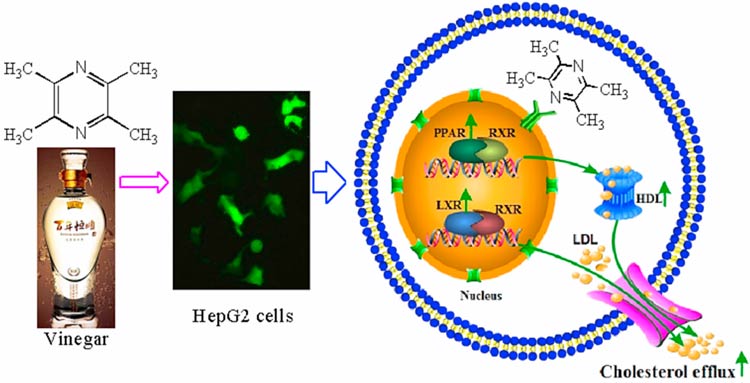 Similar to how people supplement with apple cider vinegar for weight loss, in Japan they do so with kurozu.

Interestingly, both ACV and black rice vinegar contain high amounts of acetic acid, which may explain the overlap.

In a study using rats, it was found that concentrated Japanese black vinegar had an anti-obesity effect; it significantly reduced their adipose fat tissue.

Adipose, which is also known as visceral, is most associated with belly fat. That, along with the neck, is where a lot of it tends to accumulate in overweight people. 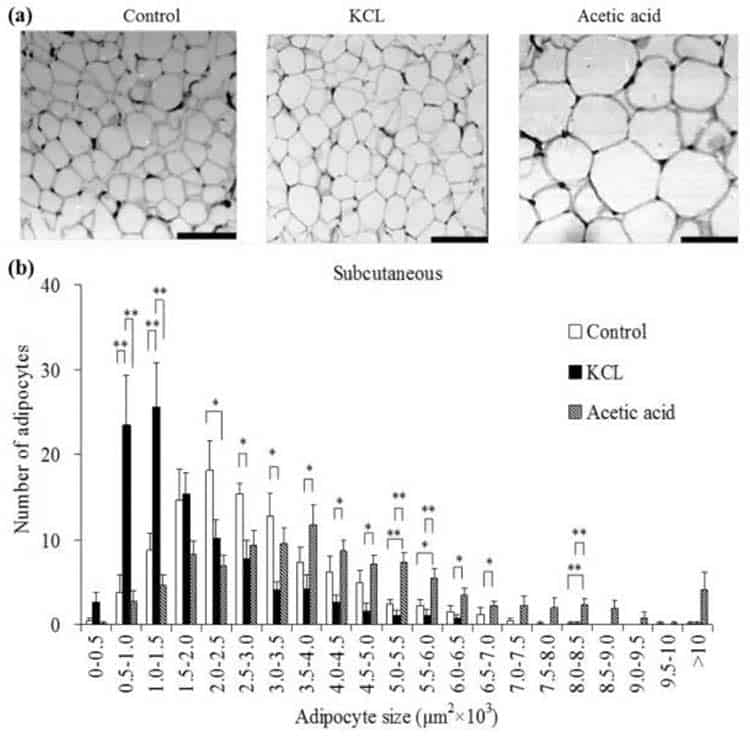 The mechanism of action for black vinegar on weight loss is reported to be its inhibition of pancreatic lipase activity. Or in plain English, it interferes with the metabolism of fatty foods being broken down. The decrease in adipose “belly fat” is due to its influence on related genes; fatty acid binding protein 2 (aP2) and peroxisome proliferator-activated y (PPARy). (8)

The number one cause of seasonal allergic rhinitis in Japan is cedar pollen. They call it Japanese cedar pollinosis and it’s basically the equivalent of what we call allergy season. (9)

In 2018, a Japanese university published a study which found that traditional black vinegar made with steamed unpolished rice (glutinous rice) had an anti-allergy benefit. They even removed the acetic acid, so that can be ruled out as the active ingredient.

The study was done using rodent cells, which react to the cedar pollen in a similar manner as human cells. They said the vinegar…

For allergies, weight loss, and other potential benefits, hopefully human studies will commence in the near future. (10)

Your best bet for finding aged black vinegar for sale will be at an Asian supermarket. Those which cater to Chinese and Japanese are practically guaranteed to have it. While a place like Walmart might not stock it, a large location for Kroger, Meijer, and similar may carry it in their ethnic food sections.

On Amazon, you can buy the famous Chinese Gold Plum Chinkiang Vinegar brand. Here’s the link for it.

For an authentic Japanese version, check out the brand Mizkan. It’s called brown rice vinegar, which is the other name for it.

Main photo by by Opencage.info, license via CC BY-SA 2.5.