It’s one of the most popular dieting ingredients on the market. Sure, you can just buy the supplements containing it, but conjugated linoleic acid is found in what foods?

The good news is that there are many natural sources of CLA and the items containing it are ordinary things, not exotic and expensive superfoods.

The bad news is that even the best sources have tiny amounts, relative to the dosages that were used in human clincial trials (where weight loss and belly fat benefits were seen). Regardless, getting a little extra from your meals and snacks probably isn’t a bad idea either, right?

That said, the amount you will get from any food source will be a tiny amount relative to how much a good supplement contains, like this one.

Ruminants are the primary food source 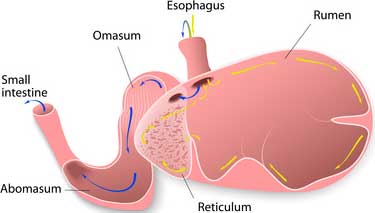 Farmers aside, many people have not heard of this word before. It’s the term used to describe animals which have four different compartments in their stomach; abomasum, omasum, reticulum, and rumen.

Humans do not have this, but many animals do such as cows, deer, goats, moose, bison, buffalo, and giraffes. There are around 150 species in total that are ruminants. Some call these “four stomach” animals, but really it’s one stomach with four parts.

The difference between a human stomach and these is how the food is digested. With rumens, the food is turned into what’s known as cud, which is regurgitated, re-chewed, and then swallowed again. Pretty disgusting, huh?

Grossness aside, one benefit they have going for them is the CLA that is created from the process.

Where does conjugated linoleic acid come from? When omega 6 fatty acids – also known as linoleic acid – are fermented by bacteria in the digestive tract, some is turned into the conjugated form. Animals which have rumens ferment their food extensively, which leads to significantly higher concentration of the conjugated. That’s why foods derived from them are some of the best sources of CLA.

Do humans make any?

That said, the bacteria in your intestines do ferment nutrients to break them down. During that, some conjugated linoleic acid that is created from the fermentation of regular linoleic acid/omega 6 (1) (2).

There really isn’t an extensive amount of research as to how much is made, but it’s believed to be very little and out of the 28 types of conjugated, only some are known to be produced. Why that matters is because only specific types are believed to have weight loss and health benefits.

Here’s a list of 25 items and how much have been found in each. Some contain CLA in a high concentration while others hardly have any, at least relative to the average portion size.

As you see, how much CLA there is in grass fed beef and cheese/milk coming from grass fed cows are the real stand outs. The beef has 500% more conjugated than cows which are on a modern factory farm diet.

This is because those eating grass are consuming much higher amounts of omega 6 fatty acids and in turn, they are producing high amounts of CLA. Contrast that to the common factory cow, eating corn and other foods which are unnatural for that animal’s diet. 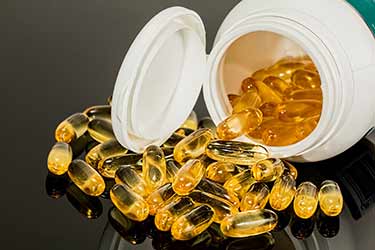 Getting decent amounts from diet may be a problem for you.

Why? Because the best sources, which are the foods highest in conjugated linoleic acid, are also some of the most fattening!

This makes sense because given that CLA is a form of fat, of course that means the higher fat foods on the list have more in them. But that also means they are some of the most calorie-dense, which can be a disaster for dieting. You could easily eat a several hundred calorie portion and not feel full whatsoever.

For healthy, slim women and men, this isn’t so much of a problem, assuming they eat the high fat meats and dairy in moderation. Though for anyone dieting and trying to lose weight – which is obviously the audience most interested in eating more CLA – it can have unintended consequences of gaining weight.

Which is best for you?

You may wonder why CLA safflower oil supplements are so popular, given that the oil contains so very little of the conjugated.

That’s because the two sources for those – Tonalin and Clarinol– use patented processes to convert and concentrate the beneficial isomers. Either of those brands typically have 1,000 mg (or more) per capsule. There are no natural sources of Tonalin or Clarinol in diet since they’re synthesized.

To get the same amount as a single 1,000 mg capsule from CLA food sources, you would need to eat this much of one of these items: 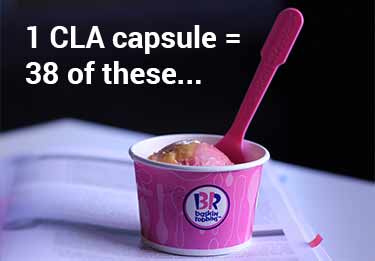 But wait, it gets worse…

The above calculations are for only 1,000 mg of CLA, which is how much you will find in a single capsule.

The studies suggesting weight loss and losing belly fat involved daily doses ranging from 3 to 8 grams (3,000 to 8,000 mg). That means you would have to eat 3 to 8 times the amounts listed above!

As much we all enjoy ice cream, it’s safe to say no one likes it enough to eat 28 to 78 pints per day!

That makes choosing one a lot easier, since you can be confident the active ingredient is legit if they’re listing one of those brands as the CLA source.

There are literally dozens of worthy options on the market. If you need help choosing one, here are a couple we have heard good reviews for:


These statements have not been evaluated by the Food and Drug Administration. This product is not intended to diagnose, treat, cure, or prevent any disease.
450
SHARES
FacebookTwitter