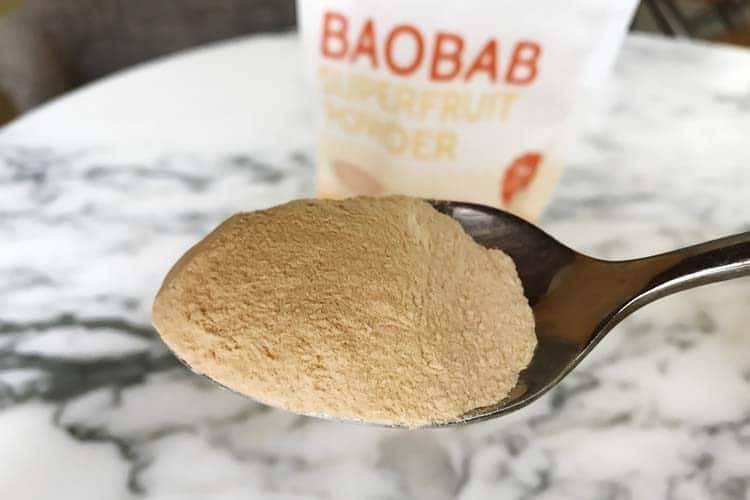 You may not have heard of it before. Even if you have, there’s a good chance you’re not saying it correctly.

Well you may want to learn, because this food is no fad!

Given its many nutritional advantages, expect to see it more often moving forward.

What is baobab powder?

The iconic African baobab tree is a succulent that produces nutrient-dense fruits called baobab. Inside their coconut-like shell is a dry whitish pulp packed with vitamin C, fiber, potassium, and antioxidants. This pulp is ground to make edible powder.

What baobab tastes like is a muted mango flavor. Because it’s slightly sour, it’s often compared to Tang, the citrus-flavored drink. If you’re eating the freeze-dried powder by itself, it will be dry and gritty like flour. This is why you blend it with protein shakes and similar.

How the powder is made

There are currently 9 accepted species of baobab, with 6 of them being native to the eastern African island nation of Madagascar. One comes from Australia. The other two come from mainland Africa and of those, the Adansonia digitata species is the most commonly consumed. It grows in 31 African countries. 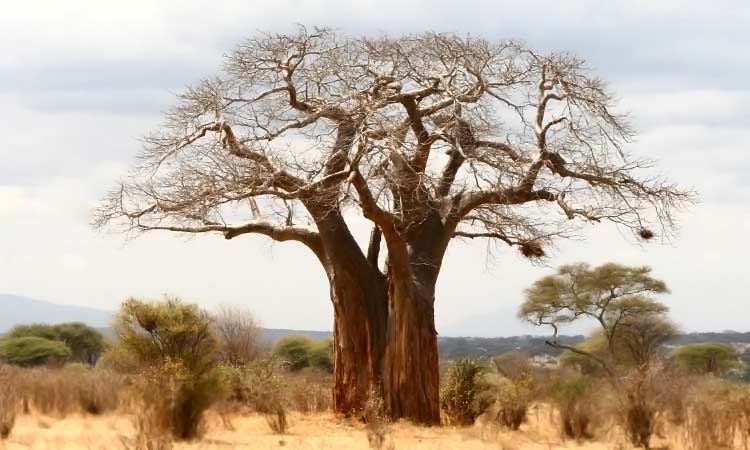 Traditionally it’s known as the tree of life. This is because its distinct swollen-looking trunks are an oasis of water in the savanna during dry season and drought.

Unlike cotton, soy, and resource-intensive crops, baobab fruit is collected from wild trees. Since they grow naturally, it means no pesticides or chemicals are used. Their deep roots and water storage system means they produce fruit even during drought. No human intervention is needed.

How long it takes baobab trees to reach maturity and produce fruit is measured in human generations; up to 200 years. The trees planted today will be producing fruit pods for the 23rd century. The oldest baobabs are at least 1,000 years old and some estimates peg a few specimens at being 6,000.

That means some of the trees alive today might be older than the Egyptian pyramids! (1) (2) (3) 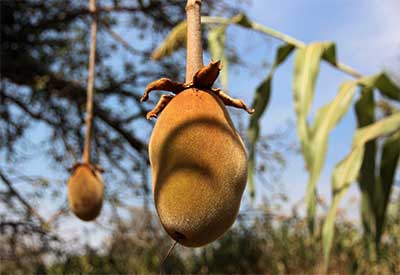 Beginning around Christmas, you will see their flowers start to transform into the superfuit. It’s a process which takes approximately six months. Interestingly, their flowers are pollinated by fruit bats rather than bees. (4)

The mature fruit pods are elongated and typically 10-14 inches for their longest dimension. Some can be fatter and more spherical in shape. Some are longer; up to 2 feet. On average, each fruit weighs around 3 to 4 lbs (1.5 to 2 kg).

When ripe, they’re sought out and collected by locals. This employs people in some of the most economically challenged communities, so when you eat this superfood, your dollar is doing some good.

The exported baobab powder is made in a central location. There, the collected fruits have their hard shells split open, to expose the chunks of pulp inside. While traditionally done with a mortar and pestle, today’s modern mechanics are often used to ensure efficiency and purity. After removing the shell, the dry pulp is sold in bulk and shipped worldwide. For most dietary uses, it’s ground into powder.

Humans aside, animals eat them too.

It’s not really peanuts, but the baobab trees which are a favorite for elephants. 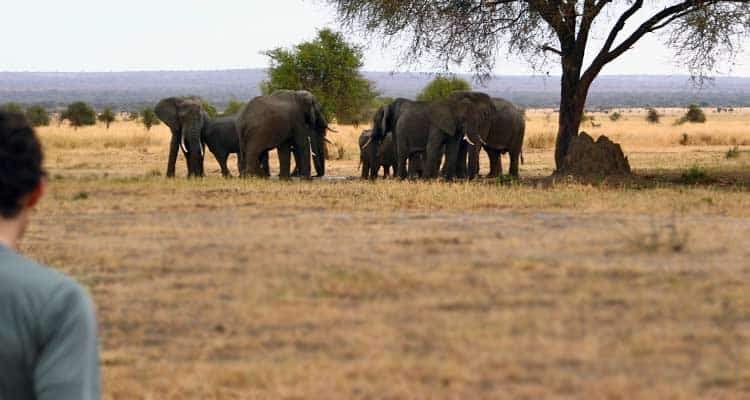 What do elephants eat in the wild? As we have validated firsthand during safaris to Tanzania, Botswana, Zambia, and South Africa, they love to gorge on the trunks of the baobab tree when water is scarce. Sometimes they eat so much that it kills the tree. Because of its resiliency, surviving with scars is more likely. You will see holes and deformities on trees from the elephants.

The baobab fruit is one of the most concentrated sources of dietary fiber. By weight, 50% of the powder is fiber. About two-thirds of that is in the soluble form.

That means for a 2 tablespoon serving (12g) you are getting 6g of fiber, which is 24% of the US adult daily value.

2. More antioxidants than most superfoods

That’s 6x more than bananas have.

Of course the rebuttal is that bananas have a lot of water weight, while baobab powder has virtually none.

True, but even if you pit it against dehydrated banana powder, that has 1,491 mg of potassium… still less than baobab! (5) 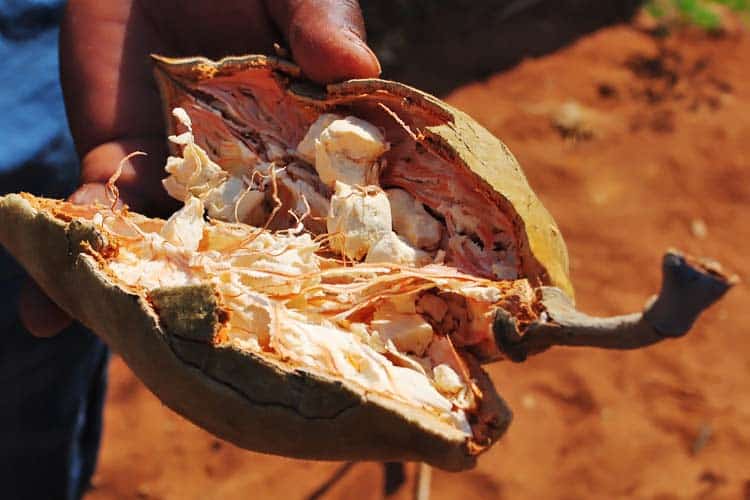 This high amount of ascorbic acid is why researchers have hailed it as “African’s manna” for over 50 years now. (7)

While some vitamin C content will be lost during processing and normal degradation, the raw powder remains a rich source; 25% of the daily value from just a 2 tablespoon serving.

That’s according to the nutrition facts for LIVfit organic baobab powder, which you can buy on Amazon.

Research out of Oxford Brookes University in the UK reports that baobab extracts can reduce the digestion of starches/carbs coming from other foods.

In an experiment, they had people consumed a water-based beverage containing either 18.5g or 37g of the powder. 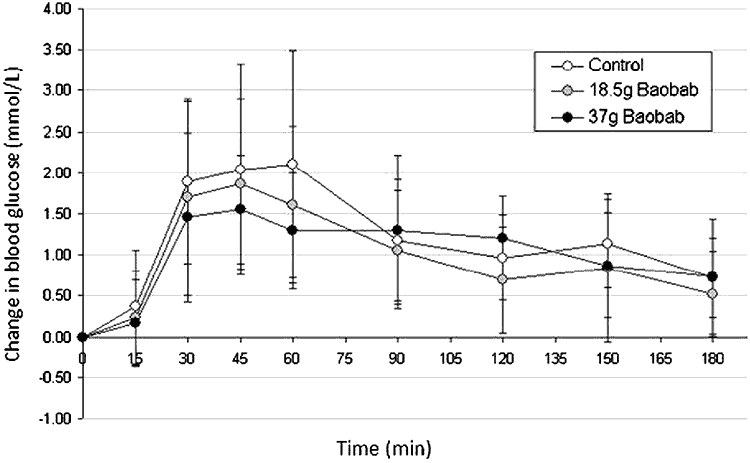 In a dose-dependent manner, when this was drank with the consumption of white bread, the digestion of starches was slowed and their blood sugar was lower. (8)

Given that it’s half fiber by weight – which contributes zero calories – it’s not surprising that 1 tablespoon is only 20 calories. Virtually none of the calories are coming from fat and the sugar content is very low at just 1g.

7. Serves as a prebiotic

The soluble fiber in baobab serves as a prebiotic, meaning it supports the growth of good bacteria in the gut (probiotics). Italian researchers found that a 2% solution of the fruit powder significantly boosted the growth of 2 out of the 3 main probiotic groups; Bifidobacteri and Lattobacilli. (9)

Baobab is good for weight loss in multiple ways. Being 50% fiber by weight means it helps you feel full, so you can eat less. By reducing the absorption of starch, it may lead to fewer related calories being absorbed. That benefit for blood sugar may help type 2 diabetics and overweight prediabetics. Lastly, the soluble fiber serves as a prebiotic to support probiotic gut flora.

There has even been a blinded human clinical trial which supports the use of this supplement for losing weight.

In a study out of the UK, a total of 20 healthy participants were randomized to receive a smoothie containing 15g of baobab powder, or a control version without it.

Three days later, the test was repeated with the other version, so each participant tried both. 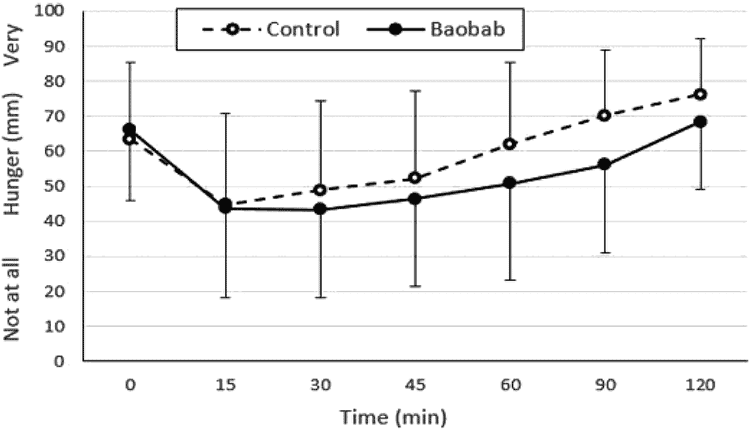 Even though both smoothies had the same amount of carbs (44g) and fat (0.5-0.6g), the baobab smoothie correlated with great satiability for the 2 hours following consumption. Meaning, they felt more full. (10)

9. Alkalizing effect in the body

PRAL, which stands for Potential Renal Acid Load, is a metric for gauging whether a food has a basic (alkaline) or acidic effect after consumption.

In the case of baobab powder, its PRAL rating is -52. That’s better than bananas, mushrooms, beet greens, beans, and carrots. This is according to testing by Baobab Foods, the maker of Baobest superfruit powder.

In a number of West African countries such as Benin, fermented baobab is considered a potent delicacy. Known as mutchayan, it’s made by combining the fruit pulp with sorghum, which is a gluten free grain.

These and other traditional fermented foods made with baobab appear to harbor healthy bacterial colonies which support digestive health. (11) (12)

11. Leaves are edible and nutritious 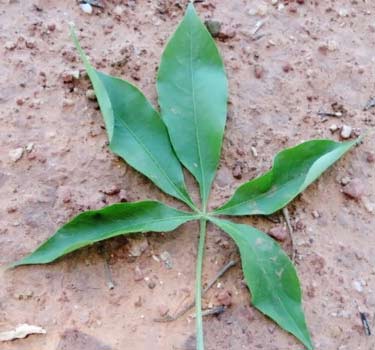 While no one yet imports baobab leaves or powder made from them, they are a staple food among many in Africa, particularly those in the central part of the continent.

They are loaded with vitamins, minerals, and research reports they have potent antibacterial and antiviral activities. (13) (14)

Traditionally, the leaves are dried in the sun and then ground into a powder for use in recipes.

Compounds in the leaf might also help protect against or lessen the side effects for certain poisons, according to preliminary research. 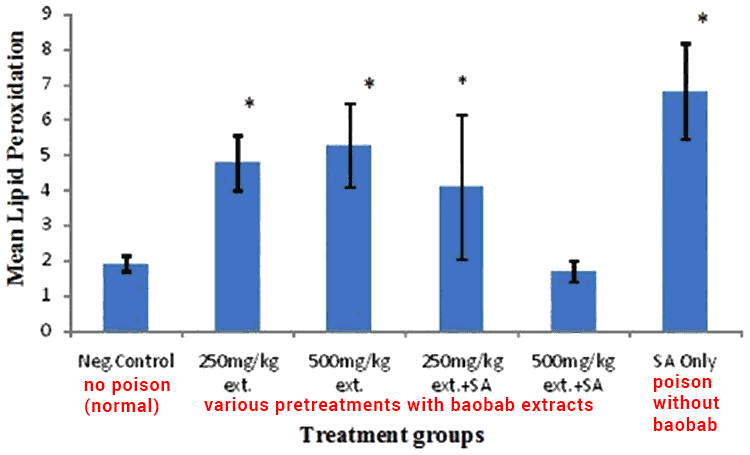 When rats were poisoned with sodium arsenite, there was significantly reduced lipid peroxidation (oxidative damage) in the organs when they were pretreated with dosages of baobab leaf extract. (15) 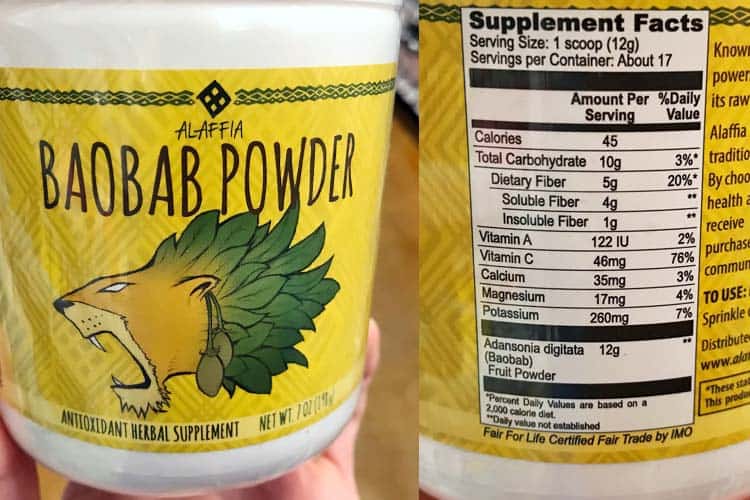 Because it is 50% fiber by weight, the most common adverse reactions from eating baobab are digestive related; stomach ache, diarrhea or constipation, gas and bloating. Allergic reactions to baobab have not been reported. While any food can be an allergen in theory, the prevalence of allergy to this fruit must be extremely rare since no case studies have been published in medical literature.

How much baobab powder a day should be no more than 1 or 2 tablespoons, at least at the beginning. This is because your body may need to adjust to the high fiber content, which can take a few weeks. Eating too much baobab powder can have a laxative effect, since soluble fiber promotes bowel movements.

Where can I buy baobab fruit?

Unfortunately buying fresh baobab fruit is not an option in the United States, Canada, United Kingdom, France, Germany, Japan, and most of the world. The powder was only approved for export to these countries within the past decade or two. The fresh fruits have not been approved for export.

There reason no one is growing it locally has to do with how long it takes for these trees to reach maturity and start bearing fruit; up to 200 years.

Aside from the powder, you can buy the seed oil which is used for cosmetic purposes, like skin and hair care. Note that is different than baobab essential oil, which is not sold or manufactured on a commercial scale.

Baobest, Organic Burst, LIVfit, MRM, Terrasoul, and Limitless baobab are the most common brands of powder you will encounter. With the exception of Baobest, MRM, and Alaffia which you might find at some locations of Whole Foods, Vitamin Shoppe, and independent health food stores, most brands are only sold online. Unlike goji, this isn’t the type of superfood you will find for sale at Walmart and similar.

On Amazon, check out Baobest and Micro Ingredients. Both brands are USDA organic.