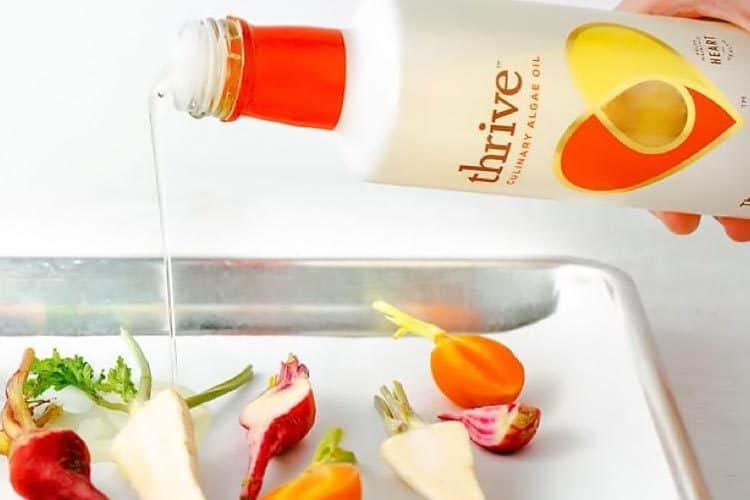 Benefits of Algae Oil For Cooking vs. Olive Oil & Avocado

It’s been said that back during the hunter-gatherer days, humans consumed omega 6’s and 3’s in an estimated ratio of 1:1.

The solution may seem simple. Why not switch out cooking oils for those rich in omega 3, like flax and walnut?

The problem is that omega 3 fatty acids are not heat stable. Even with low to medium frying temperatures, they break down and create harmful advanced glycation end products (AGEs). These are compounds which accelerate disease progression, the aging process, and some can even cause cancer.

Okay so if we can’t cook with rich sources of omega 3, what are the healthiest alternatives?

The answer may come from the sea and we’re not talking fish oil.

What is algae oil? 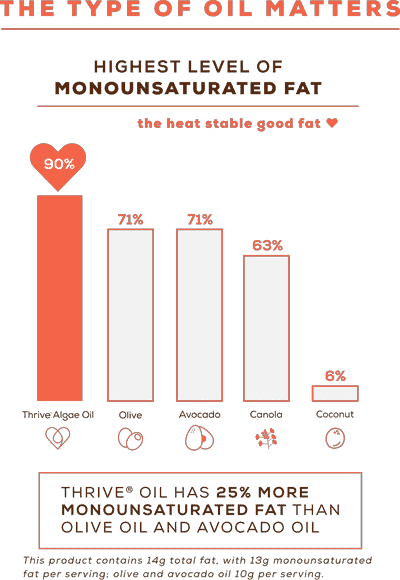 Also known as algal oil, it’s a plant-based oil which can be extracted from saltwater or freshwater microalgae. It can be used to make fossil fuel alternatives as well as food; cooking oil. It looks, feels, and tastes similar to other neutral vegetable oils, like canola and safflower.

There’s no seaweed flavor as one might expect. In fact, if you didn’t know it was made from algae, you would never guess that was the source.

Currently, Thrive is the only major brand on the market selling it for cooking and culinary uses. Thrive is owned by Corbion N.V., which is a Dutch food and biochemical company headquartered in Amsterdam.

Sadly, Thrive was discontinued in late 2020

Thrive algae oil was discontinued and completely ceased operations in October 2020. While you can buy old stock for sale on Ebay and elsewhere at 300% markups, it is old oxidized oil you don’t want.

Since they were the only manufacturer in the world of culinary algae oil, there are no alternatives.

The next best option is sacha inchi oil. After buying Thrive for 4 years, it’s what we here at Superfoodly have personally switched to. 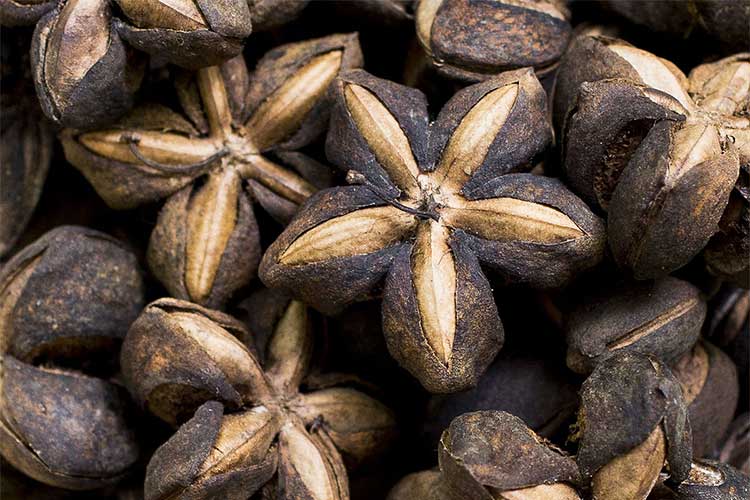 Sacha inchi (Plukenetia volubilis) are a type of seed that grows wild in the Amazon rainforest. The oil is 48% omega 3 and also contains high amounts of omega 9 and 6 as well as vitamins A and E.

Despite its high omega 3, unlike flax and chia, it is stable at high temperatures. The manufacturer Martera has reported a smoke point of 437°F (225°C). You can cook at 375°F (190°C) for 15 minutes without significant degradation of nutrients.

The brand we buy is Starseed because they are vertically integrated, from farm to bottle. Here’s the link for it on Amazon.

How is algae oil made?

You extract oil from algae using an expeller press. This is similar to how soybean, canola, sunflower, and some extra virgin olive oils are made. Hexane and other solvents are not used.

While there are dozens of species which can serve as a source, Thrive algae cooking oil is made from a species which originally came from the sap of a chestnut tree. It is grown in fermentation tanks using fresh water, similar to those used for making beer and wine. The microalgae eat their food (plant sugars) and over a period of several days, they convert it to oil. The final step is mechanical expeller pressing, to squeeze out the pure algae oil.

Is it GMO and organic?

Thrive algae oil GMO usage is not something to worry about. The microalgae they use, as well as the plant sugars to feed them, are all non-GMO.

No wheat, barley, or other gluten-containing grains are used to feed the algae, which means that Thrive oil is gluten free.

While they are not pursuing organic certification, Thrive uses no pesticides.

They are certified kosher through the Orthodox Union (OU).

Is algae oil good for you?

Because it contains no omega 3, it’s not ideal for cold and raw recipes, where walnut or flax would be a healthier choice, since those are rich in alpha-linolenic acid (ALA). For cooking, algae oil is the healthiest choice because it has a very high smoke point.

That’s because algae is low in polyunsaturated fats like omega 3 and 6. Those make up less than 2% of its composition.

Thrive oil is healthier for cooking specifically because of its low omega 3 and 6 content. Those contain high amounts of free fatty acids, which evaporate before the other components heat. That creates “soot particles” or smoke. Aside from tasting bad, the smoke contains unhealthy oxidized particles and AGEs.

While not in vogue these days, almost all other common cooking oils and fats have lower smoke points, too. Canola, corn, cottonseed, peanut, sunflower, and vegetable oil blends can’t compete with algae. (2) 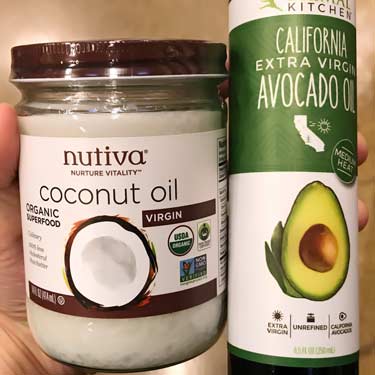 Monounsaturated fats, which are considered good fats, measure about 25% higher in algae oil than olive and avocado. That’s because Thrive cooking oil contains 90% monounsaturated, in the form of omega 9’s. Those are very heat stable. Avocado and olive oil are high in omega 6, which are still good fats but breakdown during the heat of cooking and create dangerous compounds.

Plus, given that the ratio of omega 6 to 3 is some 15x higher than what our distant relatives ate, we have an overabundance of it in our diet. Skipping it in your cooking oil is not going to make you deficient!

Contrary to popular belief, fish do not produce omega 3. They get it from the algae they eat. Or from eating other fish and invertebrates lower down on the food chain which consume that algae.

This is why there are vegan omega 3 EPA and DHA supplements, which are derived from microalgae.

The reason microalgae species which make omega 3 aren’t used to produce cooking oil is because doing so would be unhealthy; it would create an oil with a low smoke point.

Olive oil only contains 0-1.5% omega 3, in the form of alpha-linolenic acid. Avocado oil is even lower, at 1% or less. Both are bad sources, even when consumed raw. Algae oil is bad source too, but that characteristic is good for cooking since it’s more stable.

In general, saturated fats are unhealthy for the heart and cardiovascular disease. The promote and worsen risk factors for heart attacks and strokes, such as atherosclerosis (fatty buildup on artery walls). Even though it’s very high in saturated fat, the reason coconut oil is considered healthy is because it contains a relatively rare type; medium-chain triglycerides. More commonly known as MCT oil.

The MCT type found in coconut is lauric acid. At 12 long, its tail of carbon atoms is considered to be medium-length. This is digested in a different manner than the long-chain saturated fats found in olive oil. That’s almost entirely palmitic acid, which is 16 long.

Science suggests that lauric acid and other MCTs are absorbed by the liver, via the portal vein. This skips the time-consuming thoracic duct which is used to process long chains. (3) 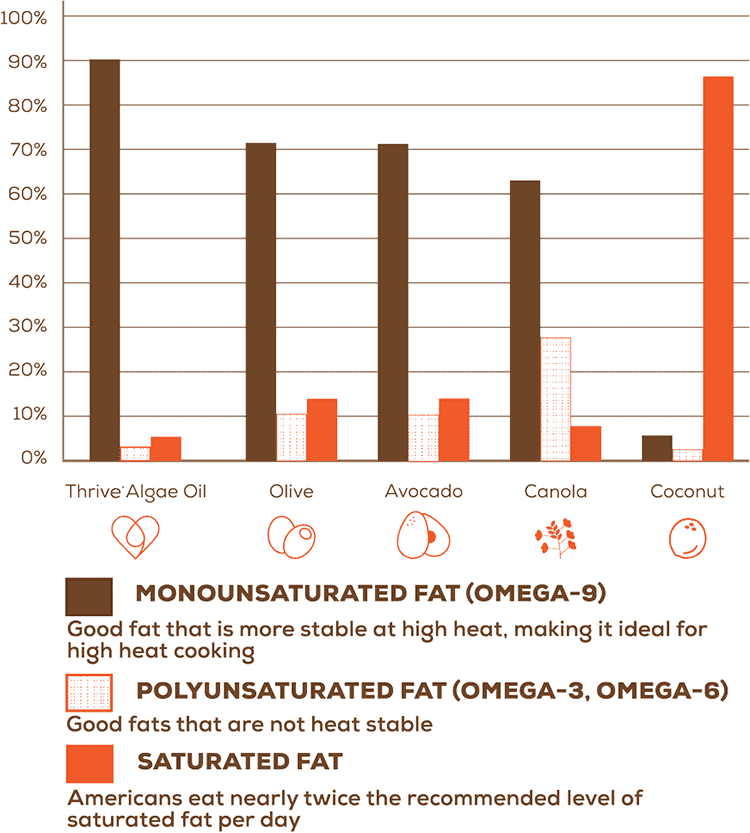 With the exception of coconut, no other culinary oils contain much (or any) of the saturated medium-chain form. This means the saturated fats found in olive oil, avocado, canola, soybean, and other common cooking oils are bad for you.

It’s also worth mentioning that not all of the saturated fat in coconut is lauric acid. So you’re still eating a lot of the bad kind with coconut.

Algae oil is good for you because it is among the lowest in saturated fat; less than 4%. Extra virgin olive oil is 14%, as is avocado. 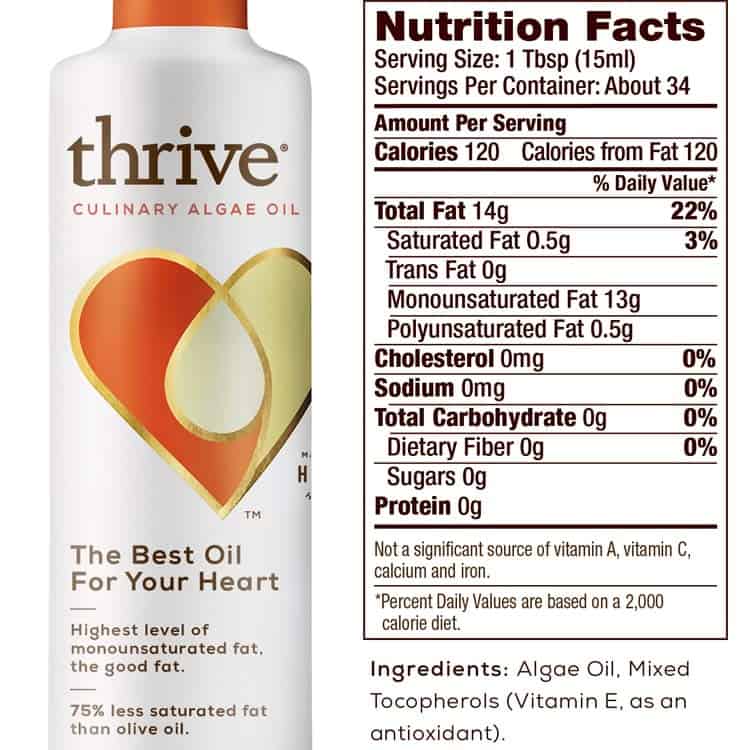 Algae oil will have 120 calories per tablespoon, which is standard for all purified liquid fats, including extra virgin olive oil. Algae doesn’t have more or less calories than other culinary oils. Since it’s plant-based, it’s cholesterol free. That’s an advantage you won’t get from ghee, clarified butter, beef tallow, or any other animal source.

For cooking, it’s hard to beat the health benefits of algae oil. It’s the highest in omega 9 fats, which are heat-stable and have a high smoke point. It’s the lowest in bad saturated fat. Because Thrive grows their microalgae in fermenters, there isn’t the danger of contaminated ocean waters and outside pollutants ending up in the culinary oil. It’s a natural, non-GMO superfood.

Thrive is the only algae-based cooking oil currently on the market. Previously available in spray form, now it’s only sold in a 16.9 oz bottle. You can buy it on Amazon, Vitacost, and Lucky Vitamin. In-store, the retailers that carry Thrive are primarily high-end small chains and independent grocers. It’s not something sold at Walmart, Costco, and similar. Publix and Stop & Shop are a couple “normal” grocery chains which carry it. We haven’t even seen it yet at the Whole Foods locations in Los Angeles.

These statements have not been evaluated by the Food and Drug Administration. This product is not intended to diagnose, treat, cure, or prevent any disease.
518
SHARES
FacebookTwitter